I am concerned for the security of our great Nation; not so much because of any threat from without, but because of the insidious forces working from within. — General Douglas MacArthur

If ever time should come, when vain and aspiring men shall possess the highest seats in Government, our country will stand in need of its experienced patriots to prevent its ruin. — Letter to James Warren, 24 October 1780 (The Writings of Samuel Adams, Volume 4) Samuel Adams (172-1803) American Patriot

An internal communication authored by FBI Director Christopher Wray and sent to FBI officials links Comey appointee, McCabe and his early departure to the results of an upcoming investigation by the inspector general.  News outlets, including CBS News and CNN, quoted unnamed sources to report that McCabe’s departure wasn’t quite voluntary, he was actually removed.  (Praise be to God!  One down, hundreds to go.)

On Monday the 29th of January, Fox News’ Catherine Herridge reported that on Sunday, FBI Director Wray read the FISA memo originally brought to the public’s attention by House Intel Committee co-chair Devin Nunes (R-CA). Director Wray saw McCabe’s name mentioned too many times, and Monday morning McCabe was removed.  Congress just voted to release the memo to the public. That very memo exposes government surveillance abuses, and now our President needs to release the memo to the American people.

Obviously, democrats do not want the American people to see this memo.  They know it contains their Deep State illegal and unethical plans to depose a duly elected President.  They are now all in CYA mode in one way or another and will do anything to stop the public from seeing the memo.

Rumors continue to be spread that the memo contains “extensive Foreign Intelligence Surveillance Act (FISA) abuse under the Obama administration.”

McCabe’s vendetta against Michael Flynn, his sexual discrimination against Robin Gritz, one of the bureau’s top intelligence analysts and terrorism experts, his ethics violations during his wife’s campaign, along with his strong ties to the Democrat party, were all well-known prior to the latest revelations in the Strzok/Page texts.

In 2014, Mike Flynn supported Robyn Gritz sex discrimination charge against McCabe and other top people at the FBI.  Surprise…two years later Flynn is the subject of a McCabe-led FBI investigation about how he supposedly colluded with the Russian ambassador.

McCabe emphatically declared at the invite-only gathering with raised voice: “F*** Flynn and then we F*** Trump,” according to numerous sources. Many of his top lieutenants applauded and cheered such rhetoric.

The Deputy Director will remain on the FBI payroll until his 50th birthday in March. His retirement date is March 18, but until then he will be “relieved of his duties.” Unfortunately for taxpayers, in March he will have 20 years on the job and he’ll be 50 years old which makes him eligible to retire with a pension.  Employees who have accrued leave, once they’re in range of 20 years of service and 50 years of age, can leave early, and that is what McCabe has chosen to do.  Sara Carter reported that McCabe apparently lashed out to his colleagues when he was told he would be asked to resign, according to sources.

McCabe, along with Strzok, Page, Ohr, Zebley, Rosenstein and many others should have been hauled out in handcuffs for their participation and promotion of surveillance on Trump and his administration.  They were put in place to protect Obama and Hillary, to carry out a liberal agenda, and to protect the Deep-State bureaucracy and destroy the Presidency of Donald Trump with their falsely created Russia collusion crime. 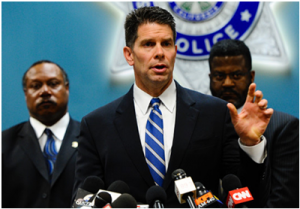 Apparently, the Swamp is a bottomless pit.  The Gateway Pundit reported that David Bowdich worked under former Director Comey, and he may be a witness in the Trump-Russia investigation because Comey had a conversation with him about Trump asking the former FBI Director to supposedly “back off its probe into General Flynn.”

Documents obtained by Judicial Watch show Bowdich was also involved in conversations with Comey about the Clinton-Lynch tarmac meeting.

Bowdich was one of the senior FBI officials scrambling to find the ‘whistleblower’ who outed Bill Clinton and Loretta Lynch to the local Phoenix media about their secret tarmac meeting in June of 2016.  He was also involved in conversations on the tarmac meeting with Comey as they scrambled to hide the scandalous meeting from the public. Clinton and Lynch allegedly spoke about the probe into Hillary Clinton’s personal email use which was completed with no charges filed.

Florida Representative Francis Rooney and others have called for a purge of the Deep State DOJ and FBI.  Rooney commented that they are off the rails.

According to previous reports, before his departure, McCabe told Bowdich and other senior FBI officials they may have to serve as witnesses to dirty cop Mueller’s Russian witch hunt against President Trump.

Just how deep Bowdich’s involvement is within the ‘swamp’ remains to be seen.  Our President promised to Drain the Swamp!  AG Sessions needs to remove all Clinton and Obama appointees from the DOJ, and if he doesn’t, the President needs to find someone who will.  I have some suggestions.

Today President Trump approved the release of that Memo. It should be made public soon.