Make government the herder of the flock, and the herder will cull the undesirable sheep.― A.E. Samaan, American Scientist, socialist and Nazi collaborator

Nine out of ten eugenicists in the 20th Century were also Progressives or Socialists, as central to the eugenic creed is the desire to engineer and centrally plan human reproduction and heredity. These were not people that believed in individual liberty. They certainly didn’t believe the individual had the right to choose their own mate freely. They were statists, they were totalitarians at heart.― A.E. Samaan

Socialism in general has a record of failure so blatant that only an intellectual could ignore or evade it. —Thomas Sowell

Physicians throughout the world have been quiet and followed the medical instructions from the hierarchy telling them that empiric clinical methods of care are not to be used, that decades old combinations of cheap and safe medications are unsafe.  Elitists with the title of “doctor” who have never treated patients, much less Covid patients, are telling us these empiric treatments are dangerous and they should only use the newer treatments recommended that cost far more, and are, in fact, dangerous.

Politicians on both sides of the aisle tell me I’m unpatriotic, that I’m a killer, that I should be as frightened and freaked out as the rest of the sheeple, and that I’m a full-fledged creature of sin for not listening to our omniscient and all-powerful government to get the jab.  Well, they can kiss my grits because I’ve already had Covid, and like the other 99.75% of the people who actually had Covid, I survived and recovered. (Take note, I am a sinner, but saved by grace and faith.)

Truly, the demand for this evil injection has reached a pitch of no return…they’ll pay you; they’ll give you donuts, they’ll have a lottery…and they’ll make you believe they can mandate this evil to be put in your body.  Forget about HIPAA Laws, forget about our Fourth Amendment, and forget about the pro-abortion phrase, “My body, my choice.”

One journalist actually stated that those of us who refuse the Covid jab should be put in jail.  Another politician said we shouldn’t be allowed to have a normal life, and good old Mayor DeBlasio, whose real name is Warren Wilhelm, (sounds like a Nazi to me), has decided New Yorkers can’t go into businesses or restaurants, etc. unless they’ve succumbed to being jabbed with a deadly concoction.

You think I’m kidding…scientists and physicians worldwide say it is deadly.

Professor Luc Montagnier, a French virologist and Nobel Prize winner, predicted the potential outcome of mass vaccinations.  He said, “Mass vaccinations are a scientific error as well as a medical error.  It is an unacceptable mistake.  The history books will show that because it is the vaccination that is creating the variants… antibodies created by the vaccine forcing the virus to find another solution or die.  This is how the variants such as Delta are created. These variants are a production and result of the vaccination.”

He’s right!  Normal variants are simply .03% of the original virus and are harmless to anyone who has already recovered from the illness and has God’s perfect immunity.

In my last article, I mentioned Dr. Michael Yeadon, former top scientist and Pfizer VP who has started his own organization. “Doctors for Covid-19 Ethics”is a group of over 160 independent medical experts worldwide, who have issued a stern warning to public health agencies about the experimental Covid-19 vaccines, slamming the jabs as “unnecessary, ineffective and unsafe” and likely to lead to “foreseeable mass deaths.”

Dr. Robert Malone, inventor of the messenger RNA tells us that the Pfizer inoculation in the waning phase is causing the virus to replicate more efficiently than it would otherwise.  It is called antibody dependent enhancement or less precisely, disease enhancement.

Dr. Joseph Mercola who has had a website with alternative therapies, proper nutrition and supplements for 25 years has been threatened to the point where he is removing all his documented work that has not only helped people, but saved their lives.  This is the Stalinist tactic…destroy the dissenters, destroy truth.

Yesterday, many of us spent hours trying to find a way to contact the good doctor and tell him that there were available ways to save his work, and I hope they succeeded.  I went to bed exhausted and heartbroken knowing so many good decent people tried, including wonderful military men who I adore with all my heart.

Dr. Peter McCullough, the top published physician in the entire world, with a massive curriculum vitae (CV) is being sued by a Texas health system for a million dollars because of an error in his published CV by one of the hosts who interviewed him regarding the dangers of mRNA jabs.

Don’t forget, the mRNA is going to appear in your next flu vaccine as well.  Please avoid that at all costs.

True science is an ever-changing discipline that evolves from open exploration and debate as the public availability of new data emerges.  When have we seen this level of censorship of knowledge and experience? Never, but the government has experimented on American citizens and veterans for decades upon decades.

Vaccines have never been perfect.  I’ve written previously about the polio vaccines grown on Simian monkey kidneys which was contaminated with the SV-40 virus.  SV-40 in the vaccine caused soft tissue cancers not only in those who received the vaccine, but in our descendants as it is genetically passed.

Now, Dr. McCullough is warning us against the Covid vaccine and is paying a personal price for telling the truth.  The powers that be want him silenced, and not only because they will make massive amounts of money on these vile inoculations, but because the promoters of eugenics (Gates, Soros, Fauci et. al.) and UN Agenda 21/30 seem to want our population culled of the “useless eaters.”

LifeSiteNews and the RAIR Foundation are supporting him.  Please click on the websites and watch their videos.

Renowned Pathologist Dr. Roger Hodkinson joined RAIR Foundation USA to defend politically-persecuted physician, Peter McCullough, MD. During his interview, Dr. Hodkinson also made powerful comments about the coronavirus vaccine, of which he has been a vocal critic. 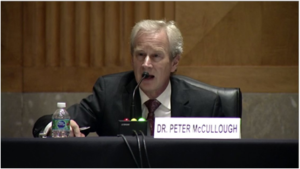 In Defense of Dr. Peter McCullough

Dr. Peter McCullough, who served as vice chief of internal medicine at Baylor University Medical Center until February, has endorsed early treatments for the coronavirus “such as Hydroxychloroquine, Ivermectin, Colchicine, monoclonal antibodies, and other proven safe and effective treatments,” as previously reported at RAIR Foundation USA.

Dr. Hodkinson slammed the Covid Psyops, “Reputations will be slaughtered, a pack of lies from start to finish.”  Watch the video!

“And this horrible moment in medical history will be remembered by the general public, when the truth comes out.”

Dr. McCullough is being threatened with a million-dollar lawsuit ostensibly because he has used his former title. According to the Dallas Morning News, Baylor “filed the lawsuit on the same day it announced it was requiring all of its employees to be vaccinated against COVID-19…”

“Yes, it’s really quite disturbing that someone of Dr. McCullough’s stature is attacked,” Dr. Hodkinson told RAIR. “Dr. McCullough is basically the top dog internationally in all this,” he continued. “For his institution to be attacking him is despicable. He’s a renowned cardiologist in his own right with a huge publication list…editor of numerous journals…” (over 600 to be exact) Hodkinson said, emphasizing that Dr. McCullough “has done nothing at all wrong.”

What Can People Do?

He recommended watching McCullough’s Rumble and Bitchute videos to get a “very good general education on Covid.” Further, Dr. Hodkinson advised that if citizens are being threatened with consequences should they not get vaccinated, an option could be “Notices of Liability,” which “can be quite powerful if they are appropriately worded and presented.”

Notices of Liability could be written by an attorney, or templates could be found online, Dr. Hodkinson added. Just the hint of a “Notice of Liability” may be enough to cause those attempting to impose the vaccine to “back off,” he said.

Further, the renowned pathologist recommended “prophylaxis with Vitamin D 5000 international units (IUs) a day, 50 milligrams of zinc” which are “readily available” and Ivermectin as an early intervention, after one gets Covid.

‘People are being intimidated’

The coronavirus vaccines were “not needed, experimental, they are dangerous, they have all kinds of complications…and people are being intimidated into taking them in the most Machiavellian fashion,” Dr. Hodkinson said. Speaking of incentives such as “ice cream” and entry into a lottery to get the vaccines, Hodkinson added “Those kinds of inducements are totally inappropriate.”

“We not only have an unneeded, dangerous vaccine, but it’s also now becoming very clear that the vaccine does not live up to its initial promise. It’s not 98% effective as they were originally saying. No! Nowhere close,” the pathologist declared. The doctor explained that the mRNA vaccine was not designed for the “more recent variants, like the Delta variant,” and so obviously the vaccines will not be as effective in treating the variants,” which we now know are caused by the injections.

The good doctor also noted that the variants are more transmissible which is a “good thing” for herd immunity, which would be a far greater alternative than taking the “unnecessary, reckless and dangerous” vaccine.

Starting at around the 9:00 mark of the RAIR interview, Dr. Hodkinson made a powerful statement about what “could happen” in the long term. “There are two big horror shows that could happen,” he explained. The pathologist qualified his statement by saying that he is “underlying ‘could’” because nobody knows what the long-term impacts could be precisely because of the rush to production.

The first major concern is that two out of three of those who take the vaccine and do not experience the known side effects other than soreness in the arm have “diffuse coagulation taking place in their blood vessels,” Dr. Hodkinson explained, citing findings from both Dr. Charles Hoffe and Dr. Sucharit Bhakdi.

These blood clots are “occurring in the slowest moving smallest vessels in the body,” and long-term consequences – such as premature onset of heart failure or dementia – can only be known by monitoring those affected. “We just don’t know,” he said.

The second potential major long-term concern is fertility. There are “serious, scientifically supportable risks” related to “fertility for males and the viability for pregnancy in females,” he explained.

Dr. Hodkinson is confident that there will be a reckoning for this “incredibly mad episode in human history.” “I think the dominoes are starting to fall,” he told RAIR. “And when the dust settles…reputations will be slaughtered because this has been a pack of lies from start to finish.” Hodkinson believes that there will be a time “when the general public starts catching wind of how they’ve been manipulated.” This manipulation is quite literal, he said, “with Psyops to force them into complying.” “There will be retribution at the polls,” Hodkinson said. (Highly doubtful this will matter.)

“Mainstream media and social media may try all they might to suppress the reality of what’s happened,” but the truth will prevail.

As a dear friend said to me, “When truth is silenced, we truly have become a Stalinist state.” The bioweapon of Covid-19, failure to use clinically proven empiric medications, and then the jab, proves she is right.