For decades now, the Washington Post and New York Times have been read only by left-wing minions of the Democrat Party. Both are well-known propaganda machines of the far left in America. But the situation changed for the worse in 2016, when Trump became the 45th President of the United States.

Jeffrey P. Bezos formally took over as the owner of The Washington Post in 2013, officially ending 80 years of local control of the newspaper by the Graham family.

Bezos’s $250 million purchase was completed as expected with the signing of sale documents. The signing transfers the newspaper and other assets from The Washington Post Co. to Nash Holdings, Bezos’s private investment company.

Jeff Bezos has been funding left-wing politicians and causes ever since becoming wealthy with his Amazon online retail establishment, which has been responsible for closing the doors of thousands of small independent retailers and even major national retail chains across the country.

Second only to George Soros, Bezos, who owns WAPO The Washington Post, which is ground zero for almost every negative “fake news” attack column against President Trump since 2013 – is the single largest financier of left-wing causes and the anti-Trump propaganda hitting our headlines every single day.

Other left-wing “fake news” outlets then pick up these stories and run with them, regardless of all facts and evidence to the contrary, quoting WAPO as their “source” to maintain a defensible position against libel and slander suits by saying “we only reported on the WAPO reports.” BINGO… the “fake news” spreads across news outlets like a raging prairie fire out of control.

In February 2017, after losing the presidential election with Hillary Clinton, John Podesta joins WAPO as a “contributing columnist.” When in his career has John Podesta ever been a journalist, columnist or news reporter?

Since graduating Lane Tech High School in Chicago, Knox College in Galesburg, Illinois in 1971, where he had served as a volunteer for the presidential candidacy of Eugene McCarthy – and receiving his J.D. from Georgetown University Law Center in 1976, Podesta has spent his entire life at the highest levels of anti-American left-wing politics with both the Clintons and Obamas, among many others.

Still wondering where the “fake news” headlines are coming from at WAPO? Read on…

“According to an unsubstantiated article by the Washington Post, anonymous CIA officials have confirmed that the Russian government hacked the United States election to favor Donald Trump.” December 2016

According to WAPO reports, they have been gaining their “fake news” information from “unnamed CIA leakers.”

However, we are seeing more Washington DC leaks than a kitchen colander. Can they all be coming from CIA operatives working against America?

Almost EVERY federal agency is full of anti-American employees that donate almost exclusively to Clinton, Obama and every left-wing cause under George Soros’ more than 200 NGOs (non-governmental agencies). 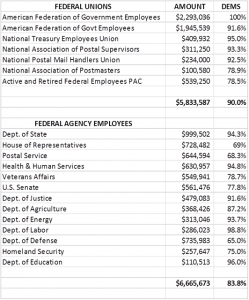 What the above chart shows is 90% of Federal Employee Union members and 83.8% of all Federal Employees are anti-Trump and every last one of them could be a “leaker” working to undermine the Trump Administration and 63 million Americans who voted for him.

In addition, the far left has massive boots on the ground through more than 200 NGOs – and billions in funding behind them from anti-American terrorists like George Soros of Open Society, Jeffrey Bezos of Amazon and the Washington Post and the foundations of Peter Lewis of Progressive Insurance, the Clintons and Obamas.

Furthermore, many of these NGOs enjoy tax-exempt and deductible status with the I.R.S. and therefore, are heavily funded by our tax dollars.

Last, but not least on this matter, Amazon and Washington Post owner Jeffrey Bezos received a $600 million-dollar federal contract with the C.I.A. to create a “government cloud” for records storage and sharing, from which it appears, massive anti-Trump government leaks of even classified information may be coming from…

How much more do I need to connect the dots for you here?

Amazon’s Jeffrey Bezos owns the single largest database of consumers in America and has taken a $600 million-dollar contract with the C.I.A. (leakers) to build and manage their “cloud” – while owning the Washington Post (WAPO) at ground zero for all current security leaked “fake news” stories aimed at destroying Trump… and, Clinton campaign manager John Podesta is now a contributing columnist for Bezos’ WAPO.

Still wondering where all the “fake news” stories against Trump are coming from, how or why? Look no further!

Still plan on shopping with Amazon.com or reading the Washington Post or any of the dozens of news outlets spreading the false propaganda by quoting the WAPO?