Members Of Congress: Alcoholics, Dementia, Alzheimer’s – How Many?

In October 2017, a story ran on the Internet which caused an uproar within the beltway aka The Swamp. Members of Congress who are busy destroying this country get their meds delivered to the capitol (apparently staff also receive this service). But, that’s not what caused social media to go bonkers.

A pharmacist and owner of a quaint old-style pharmacy in Washington, DC, Grubbs Pharmacy, said:

“The owner of the Capitol Hill pharmacy that supplies prescription drugs for members of Congress and staff has sparked a frenzy of speculation after claiming he gives meds to lawmakers with “pretty serious health problems” and appearing to question their mental faculties.

“At first it’s cool, and then you realize, I’m filling some drugs that are for some pretty serious health problems as well. And these are the people that are running the country,” Grubb’s Pharmacy’s Dr. Michael Kim told STAT News, reportedly citing treatments for conditions like diabetes and Alzheimer’s.

“It makes you kind of sit back and say, ‘Wow, they’re making the highest laws of the land and they might not even remember what happened yesterday,’” he said. “

In less than 24 Hours, Dr. Michael Kim was trying to dig himself out of a big hole: “The comment was made in a hypothetical joking way which was not conveyed in the article,” Kim said in an email. “I know that patient privacy and serious health conditions are no joking matter and I’m sorry that the comments gave the impression that I was actually talking about someone specific, but I was only talking in a speculative manner without anyone in mind.”

So, once again, we have comments taken out of context: “I’m filling some drugs that are for some pretty serious health problems as well.” It seems to me that is a pretty clear statement from the horse’s mouth.

He was only speaking in a ‘speculative manner’ without anyone in mind yet his interview dealt with filling prescriptions for members of Congress, not the general public. He said “They’re running the country” and” making laws”. Civilians don’t have that power.

There’s no question in my mind Nancy Pelsoi has dementia that is worsening. I’ve been dealing with it with my 90-year old mother for the past several years. No, it doesn’t get any better. The repetition of the same subject matter over and over, can’t remember what she said five minutes earlier on the phone, confusion, mild panic when her mind goes blank. It’s very sad and takes a great deal of love and compassion dealing with someone who has dementia or Alzheimer’s.

Pelosi has been displaying all the classic signs of dementia for the past couple of years; she is 78 years old. And, like too many who make being a member of Congress a lifelong career, it appears Pelosi intends to stay in office until she drops dead at the podium. OR, her party does the responsible and morally right thing: Have a private conversation with her that it’s time to retire.

You can see it in these videos at different times as she lies through her teeth. Moments when she tries not to panic as her mind goes blank. I’ve seen it with my mom many, many times.

I don’t believe Pelosi has Alzheimer’s although I think she’s getting to the early onset of that terrible disease. I worked part time for the Texas Veterans Home in my area one summer and had 20 hours of formal training on dementia and Alzheimer’s; I was eventually assigned to the dementia wing. Is Pelosi on the path to Alzheimer’s? I say very likely as sadly, it is the progression for many who suffer from dementia:

How about mad Max (Maxine) Waters? Another U.S. Representative who should have left Congress decades ago. She is 79 years old and has done nothing but foster racism and show her rank stupidity since she’s been in office; Waters has been in Congress since 1991.

Is Waters simply crazy as in crazy or does she also suffer from dementia? I believe a little of both but she should not be serving in the most powerful body of politicians on this planet.

How about drunks and drug addicts serving in Congress?

“When Rep. Trey Radel pleaded guilty today to cocaine possession and promised to enter rehab, he joined the ranks of one of Capitol Hill’s most secretive and exclusive clubs — addicts.

“For more than a decade, members of Congress, struggling with addiction, have met behind closed doors in Georgetown, on Capitol Hill, at a church across the street from the Capitol, and, on some mornings at a hotel on Pennsylvania Avenue.

“But at least three other members of Congress secretly came to Ramstad seeking help for addiction, he told ABCNews.com. Ramstad said he did not know how many current members were in treatment. In almost every instance the veil of secrecy and lies is inopportunely lifted when a congressman is caught by police abusing drugs and there is little choice but to come clean.

“[Members of Congress] represent the country which includes millions of addicts and members aren’t exempt,” said Patrick Kennedy, a former congressman from Rhode Island who came forward about his addiction to prescription drugs after a 2006 automobile accident in which he drove his car into a Capitol Hill barricade. He later pleaded guilty to driving under the influence.“

Rep. Tom Garrett of Virginia drops bid for re-election, cites alcoholism, 2018 – One term drunk who is a member of the highly touted Freedom Caucus.

There’s a growing list of sexual deviants in the House and Senate; lesbians, homosexuals and bi-sexual. Are any of them getting prescriptions to treat HIV/AIDS that cost a King’s ransom paid for by you and me? Well, that certainly is a privacy issue that should remain private. But I say shame on voters for putting them in office. Men having sex in each other’s feces and sticking their fists in another man’s rectum and women slobbering in each other’s vagina is a choice, not “born that way”.

I believe, regardless of party, the answer is yes. Members of Congress have access to our highest national security intelligence information. They confirm judges and ratify treaties. They make the laws we are forced to live under unless over turned by a court. Some of them meet with high ranking officials of foreign governments.

If they are being treated for dementia, Alzheimer’s or on those heavy duty anti-depressant drugs I believe they represent a danger to this country and should NOT be in office. Period.

Depression is a very serious mental health issue and can be a dangerous one. Not only for the individual but the public. Not to mention the real possibility of blackmail. Either you vote for this bill or your drinking problem or whatever it is will get leaked to the press.

Members of Congress who are drunks on the job need to resign. Until they’re caught, they are in office voting on legislation that affects our lives and this country regarding foreign policy, treaties, judges and more. Remember what the column above said:

“But at least three other members of Congress secretly came to Ramstad seeking help for addiction, he told ABCNews.com. Ramstad said he did not know how many current members were in treatment.

“In almost every instance the veil of secrecy and lies is inopportunely lifted when a congressman is caught by police abusing drugs and there is little choice but to come clean.”

How about the ones never outed like former Speaker of the U.S. House of Representatives, Johnny Wino Boehner? There’s NO doubt in my mind Johnny was and probably still is a ‘functioning’ alcoholic; it was no secret he was drunk by 2:00 pm just about every day.

He was too powerful. Good old Johnny retired with a full pension; you and I will be paying his booze bill for the rest of his life while he lives in an $800,000 condo in Florida, playing golf and making buku bux sitting on three boards; one for a lobbying firm, one for the second largest tobacco company ($400,000 a year), one for legal marijuana.

Closet alcoholics serving in Congress are deceiving their constituents and need to resign and get help. If you think the top of the food chain in the House and Senate don’t know some of those dirty little secrets, think again. I’ve been to DC many, many times. It was common talk around town and from several trusted sources of mine everyone knew Boehner was a drunk.

I tried hard to find this article I read several years ago about a Congressman who retired and then came clean. I think he was from Pennsylvania and had served in Congress for two decades. Only after he left office with his full pension did he come clean and admit in his own words he was drunk every day on the job.

I realize alcohol and pills are addictions but we’re not talking about a kid who works at the local convenience store. They need to resign and get treatment on their own. Too many addicts hide falling off the wagon for the booze and pills. They simply cannot remain on the job.

Of course, they won’t do it because they want you to pay for their treatment AND being a member of the U.S. Congress is so exclusive and powerful, the majority of them never want to give up that power.

Dirty, filthy politician Paul Ryan is retiring and will no longer be Speaker of the House. Whoever becomes the next speaker needs to make this a priority. Yes, medical records are private and must absolutely be protected.

But, when you have such obvious displays of mental decline like dementia or the onset of Alzheimer’s by a member of Congress, he/she must resign. The same goes for members of the U.S. Supreme Court like Comrade Ruth Bader Ginsburg, age 85.

Justice Ginsburg: Not ‘100% sober’ at State of the Union

“As she did two years ago, Ginsburg admitted Thursday night that, yes, the photos of her appearing to nod off at President Obama’s big speech last month showed her dozing. “As I often do,” she said. 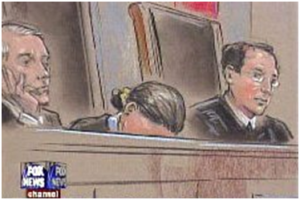 Snorer in the court? Ruth Bader Ginsburg snoozes, Justice dozes off during political redistricting hearing, colleagues let her sleep, March 3, 2006 (That was 12 years ago when she was 73)

Chief Justice John Roberts: Get off your worthless ass and quietly force Ginsburg to retire unless you want the spectacle of her ‘nodding off’ only to discover she’s actually dead during oral arguments.

The Speaker of the House, United States House of Representatives and the big crook, Senate Majority Leader, Mitch McConnell, are the ones who must take this on because it is the right thing to do. For the sake of the individual and the country.

We the people have the right to know if the person they voted for is mentally capable of remaining on the job. In the case of Pelosi, she should have been forced out at least a year ago. We’ll see what the next Speaker of the House does on this if enough Americans demand action.