Since the women are the ones who bear the babies, and there’s nothing we can do about that, our laws and customs then make it the financial obligation of the husband to provide the support. It is his obligation and his sole obligation. And this is exactly and precisely what we will lose if the Equal Rights Amendment is passed. —Phyllis Schlafly

In 2014, Justice Antonin Scalia said, “I certainly would not want a Constitutional Convention. Whoa! Who knows what would come out of it?”  Justice Ruth Bader Ginsburg then weighed in with the tiresome complaint of the feminists. Her first choice for a constitutional change, she said, would be the addition of the Equal Rights Amendment (ERA).

Today there are five pro-abortion justices on the Supreme Court.  Several past and present justices have signaled in written opinions their willingness to use sex discrimination to strengthen abortion rights. Some of the states with Equal Rights Amendments have already used it to mandate Medicaid funding for abortions (our tax dollars at work) and overturn abortion restrictions.

Justice Anthony Kennedy will be 82 this July, and Justice Ruth Ginsberg will turn 85 on March 15, 2018.  If they were to retire and President Trump appointed two conservative justices like Scalia, originalists and textualists, we would have a much better chance of receiving constitutional interpretations and decisions from the top court. 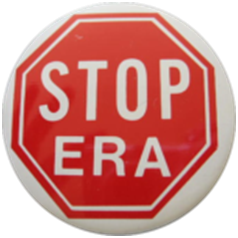 As for this new Equal Rights Amendment, it needs to be stopped, and their first target is the State of Illinois.

Phyllis Schlafly was right about the proposed ERA some 46 years ago.  Everything she claimed it would do was exactly true and has now been passed in many states by the liberal courts rather than through an amendment.  The original amendment said neither the federal government nor any state could abridge or deny any right on the basis of sex, and its ratification seemed imminent. Both parties supported it, including President Nixon, and it passed the Senate in 1972 with 84 votes. [Link] By 1975, 35 of the necessary 38 states had passed it in their legislatures.

Illinois was not one of the states who passed the ERA, even though bordering states, like Indiana and Wisconsin, had done so. When it became clear that not enough states could accomplish this within the original time allotted, Congress extended the deadline to June of 1982. This deadline was debated and five states voted to recall their ratification of the ERA:  Nebraska, Tennessee, Idaho, Kentucky, and South Dakota.

In Illinois, ERA activists fought until the “bitter end.”  It died in the 1980s even with its now-declared dubious constitutional extension.  The 35 states that had enacted the proposed amendment did not concur with the extension. 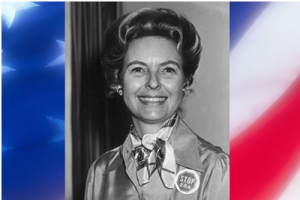 I was still living in Illinois at the time, and in 1973, Phyllis Schlafly Eagles waged the battle against this vile bill in my state, and it lasted for ten years.  We had pamphlets, booklets, STOP ERA pins, and we worked through our state legislators, just as we’re doing today to stop another Constitutional Convention.

When feminists were trying to get the ERA passed in the 70s, actor Telly Savalas said, “I don’t understand these women. We give them a hundred percent of everything we have and now they’re fighting for fifty percent.”  Telly had a point, but today’s ERA is far more insidious than the first one.

Phyllis Schlafly said, “A lot of people don’t understand what feminism is. They think it is about advance and success for women, but it’s not that at all. It is about power for the female left. And they have this ridiculous idea that American women are oppressed by the patriarchy and we need laws and government to solve our problems for us.”

#MeToo started in October 2017 as a hashtag used on social media to help demonstrate the widespread prevalence of sexual assault and harassment, especially in the workplace.  It followed soon after the public revelations of sexual misconduct allegations against Harvey Weinstein.  Do I believe all these women? No, I definitely do not, because this is another part of the destruction of Christianity and the American male.  Social activist and community organizer Tarana Burke created the phrase “Me Too” on social networks. 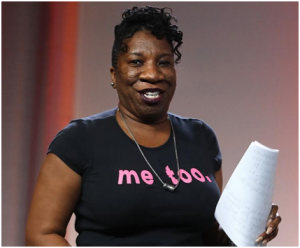 Burke is also the Senior Director of the non-profit, Girls for Gender Equity.  Scroll to page nine of their 2016 990 for their government grants.

Burke is a Democrat American civil rights activist, and those who have joined her activism include #MeToo lawmakers who have slept with colleagues to get information out of them.  Democrat Assemblywoman Bell Gardens allegedly spoke graphically about her encounters, and allegedly urged fellow lawmakers to play “spin the bottle” after a political fundraiser. Link  This is the ilk promoting the poorly written new ERA.

The new ERA bill will do nothing to stop sexual harassment or assault, but what it will do is eliminate rights women have always had, harm our unborn children, and eliminate protections unique to women.

Supreme court Justice Ruth Bader Ginsburg, as an ACLU attorney wrote that the original ERA would strike down over 800 federal laws that favor one gender over the other. Link  Widows will lose Social Security benefits from their deceased husbands, age of consent and parental notification laws will be eliminated, as well as single-sex bathrooms and changing rooms.  Sound familiar?

Past Illinois lawmakers voted this down 13 times, and we need to do it again.  This new bill, like the old ERA, mentions nothing about equal pay or equal rights. It is very poorly written.

In Frontiero v Richardson, Justice Ginsburg agreed with Justice Brennan’s opinion that American men put women, “not on a pedestal, but in a cage,” and that “throughout much of the 19th century the position of women in our society was, in many respects, comparable to that of blacks under the pre-Civil War slave codes.”

Today’s ERA is even more vile than the 1972 original.  Remember, the 1973 Supreme Court decision, Roe v. Wade, legalized abortion by a 7-2 vote. Six of the seven justices in the majority were Republican appointees.

Their new agenda is to 1) codify gay rights and abortion in the constitution and 2) drastically change the military.  The left wants to make us into a unisex society.

This new ERA would expand abortion rights from conception to birth and eliminate states’ laws against Rule 766 taxpayer funding for Medicaid abortions.  The rationale used is that men have access to medical care for issues unique to them, thus women should have the same availability, including abortion on demand.  Both Connecticut and New Mexico have ruled that under the ERA, the regulation prohibiting Medicaid funding discriminates against women, and especially poor women. 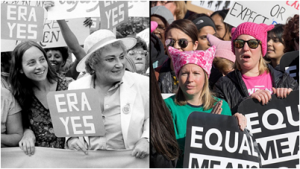 Excerpts from amicus court briefs by the National Organization of Women (NOW) and the American Civil Liberties Union (ACLU) can be viewed here.  (Betty Friedan and Gloria Steinem were on the front lines promoting the original ERA.)  These ERA supporters and abortion advocates agree that the ERA expands abortion rights and will permit Medicaid funding for abortions.

In fact, using ERA sex discrimination logic, scholars have stated that the ERA would eliminate all abortion regulations and restrictions, including partial-birth abortions.  It would also provide a new federal constitutional basis for abortion rights. Rather than Roe v. Wade privacy rights, the ERA would insert into the U.S. Constitution a right to abortion based on sex discrimination and would provide a legal basis for overturning abortion regulations and restrictions in all 50 states.

Conscience protections would be eliminated for hospitals, physicians, and nurses who do not want to participate in abortions.  Add to that the overturning of the Hyde Amendment, (which has not become a permanent law) and the threat of losing tax exemptions for private religious schools that discourage abortion.

In the 18 states that have passed state ERAs, there have not been any benefits for women.  In fact, women have been harmed.  In Maryland a husband could no longer be required to support his dependent wife.  In Pennsylvania, a father was exempted from support for his minor children, and a husband’s legal responsibility for his wife’s medical costs was nullified.  Again, in Pennsylvania, gender-based automobile insurance rates were disapproved by the state insurance commissioner due to a claim of sex discrimination.  Women now have to pay the same higher rates as men even though statistically they have better driving records.

The feminists want to get Illinois passed and they have hopes that it will move to three other states, Virginia, North Carolina, and Oregon. If they get Illinois and one other, they are going to go full force with public relations saying the ERA is “retroactively” passed.  Untrue, but they will try it and it will create unbelievable problems.

Check your state, watch for it, because this ERA is devastatingly dangerous to the welfare of America’s women and their families. The agenda is quite different from what we faced in the 1970s.

Please contact your Illinois state senator and representative and encourage them to vote against the ERA (SJRCA4).

The information in this article is from Phyllis Schlafly Eagles, who are working to brief the administration so they’ll know the dangers in the new ERA.  See also Nancy Thorner’s excellent article in the Illinois Review, Illinois Lawmakers Beware of Deceptive Sweet Talking ERA Proponents.

P.S. NewsWithViews writers work overtime to bring readers the real truth of what is happening in our country.  We donate our time and efforts because the truth is so very rare today, especially in main stream media.  The CEO and publisher of NWVs has put his heart, soul, and personal funds into this effort.  Won’t you please help us by sending your monthly donations here.