Mueller, Rosenstein And Comey: Three Amigos From The Deep State

There is a longtime and incestuous relationship between the fixers who have been tasked with taking down President Trump, under the fake narrative of enforcing the law.  James Comey worked in the DOJ directly under Mueller until 2005. Rod Rosenstein and Mueller go even further back. 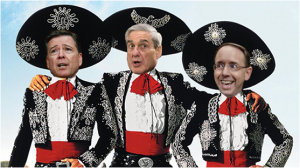 James Comey wasn’t just some associate of Mueller back then, but rather his protégé.  Under the George W. Bush presidency, when Comey was serving as Deputy Attorney General under John Ashcroft, Robert Mueller was Comey’s go-to guy when he needed help.  The two men, as it came to light years later, conspired to disobey potential White House orders to leave Ashcroft alone when he was incapacitated in March of 2004.  These two men, when together, will not obey orders if they think they know better.  Being filled with hubris and almost two decades of doing just about anything they want, they always think they know better.

Rod Rosenstein, current Deputy Attorney General under Attorney General Jeff Sessions, is also a member of the Mueller Gang, having worked directly under Robert Mueller at the Department of Justice as far back as 1990.  When Comey was still working as the Deputy Chief of the Criminal Division for the U.S. Attorney’s office in New York, Mueller and Rosenstein were becoming thick as thieves.

We look back at Rod’s loyal work for Hillary Clinton, when he became a clean-up man for the Clinton Administration as an Associate Independent Counsel from 1995 until 1997. He supervised the investigation that found no basis for criminal prosecution of White House officials who had obtained classified FBI background reports. He did a great job covering for the Team Bill Clinton, including covering for Hillary, as she was one of the people who had access to the reports, and may have even requested them. Convenient for the Clintons, no indictments were filed.

Having proven his loyalty to the powers that be, Rosenstein was appointed to work in the US Office of the Independent Counsel under Ken Starr on the Whitewater Investigation into then President Bill Clinton. By some miracle, or clever work by insiders, the Clintons escaped culpability once again.  Rod wasn’t alone, he had help from his co-worker James Comey, who was also making sure the Clintons were exonerated during the Whitewater affair.

Here is Robert Mueller, sitting in the middle of his two wunderkinds, making sure the path before them is smooth and obstacle free, and practically shepherding their careers along the way.  Is it any wonder that once Jeff Sessions shamelessly recused himself from the Russia Collusion Conspiracy investigation and turned it over to his deputy Rod Rosenstein, that Rosenstein would reach out to his old mentor for help?  Who is surprised when three of the top lawman fixers for the Clinton/Bush cabal have axes in their eyes for President Donald J. Trump?

Enter Lisa Barsoomian, wife of Rod Rosenstein.  Lisa is a high-powered attorney in Washington, DC, who specializes in opposing Freedom of Information Act requests on behalf of the Deep State, err, I mean, the Intelligence Communities.

Barsoomian participated in some of this work personally and has herself represented the FBI at least five separate times.  It would be great to research the specifics of the cases she worked in, many of the documents from the Court Docket relating to these cases have been removed from the D.C. District and Appeals Court, including her representation for Clinton in 1998’s case Hamburg. V. Clinton.

Her loyalties are clearly with the entities that make up the Deep State, as are her husbands.

They are a DC Globalist Power Couple, and they mean to destroy Donald Trump under the bidding of their Globalist Masters.  Rod Rosenstein should not have any position in President Trump’s administration, let alone one with so much power to harm the Office of the Presidency.

Mueller is also a Deep State lackey, even acting as delivery boy for Hillary’s State Department, hand transporting ten grams of highly enriched uranium under the auspices of counter-terror. It must only be coincidence that this happened at the same time as Hillary and her henchman John Podesta were nurturing the Uranium One deal that would see Russia take control over 20% of America’s proven uranium reserves.  Shortly after the Russia uranium deal closed, the Clinton Foundation was showered with many millions of dollars from Russian donors.

Comey, Rosenstein, and their patron Mueller are truly the Three Amigos of the Deep State.  Joined long ago in mutual regard, owing allegiance only to each other and the enshrined bureaucracy that created them.  As their actions show, they desire to thwart the will of the people and depose the duly elected President of the United States of America by using all the powers at their disposal.