So a private citizen “doctors up” a ten year old video of a scripted WWF event where Donald Trump takes down Vince McMahon. Instead of seeing McMahon’s face, we see a CNN logo superimposed over McMahon’s face, giving us an illusion of Trump taking down CNN.

Judging from the absolute hysteria emanating from the “mainstream media” – especially CNN – you would have thought that Trump actually did “take down” one of CNN’s reporters.

“Encouraging violence against the media” has been the mantra since the video’s release.

Really. Such hyperbolic caterwauling. Where was the uproar from the MSM after all of the multiple mock “assassinations” of President Trump that have been occurring on a nearly daily basis? My gosh, even Skakespeare in the Park has been turned into acts of violence against Trump.

Apparently it’s okay to incite violence against the president of the United States, but a fake wrestling takedown of a network logo somehow amounts to a huge threat against the first amendment. The MSM has of course exhibited huge double standards for years, but this is simply ludicrous.

So now here is CNN, so intimidated by a relatively benign video acting as if government agents have shut down their studios. 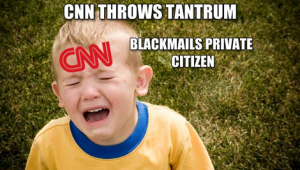 CNN has even gone so far as to track down the individual responsible for the video and effectively blackmailed him by threatening to expose and identify him personally if he didn’t delete all of his postings and shut down all of his social media.

So who is actually the bully here? Who are the brownshirts effectively trying to shut down freedom of speech?

CNN is acting like a bunch of first-grade tattle-tales.

But this is exactly the sort of behavior we have come to expect from the Communist News Network.

They have been publishing any damn thing they wanted to – including a lot of demonstrably fake news. When people who see them for the leftwing propaganda machine that they are start calling them out – instead of threatening private citizens, CNN needs to put on their “big boy pants” and suck it up.