Home/February 2020, Opinions/New Hampshire Colonials Must Be Vomiting In Their Graves

New Hampshire Colonials Must Be Vomiting In Their Graves

“People are unhappy with the direction of this country – we saw that with the rise of the tea party, we saw that when we saw thousands of people at the state house in Concord, New Hampshire, protesting the government over more taxes and spending.”  —Corey Lewandowski

“Live Free or Die?”  Really?  Sadly, one of the oldest of the 50 states, has turned from red to blue.  Yes, today, it has a Republican Governor, but its governing policies have shifted left into socialist territory as far back as the 1960’s when the Democrat Party made a resurgence in the state.  Since 1992, New Hampshire has supported the Democrat candidate running for president with Clinton in 1992, John Kerry in 2004 and Barack Obama in 2008 and 2012.

New Hampshire wasn’t always a left-leaning state.  In December of 1774 the people of New Hampshire supported the armed resistance against the British.  It furnished two brigadier generals to the Constitutional Army.  It provided three regiments of regular troops and hundreds of short-term militiamen.  It created its own government in 1776 and instructed its delegates attending the Continental Congress to vote for independence.  New Hampshire was the ninth and deciding vote in ratifying the U. S. Constitution in 1788.  Its Republican and conservative roots ran deep. 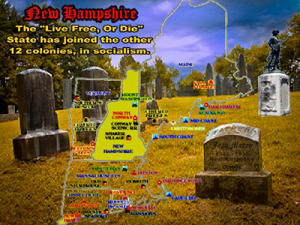 But like Virginia and the rest of the 13 colonies, the “Granite State” has shed most of its conservative roots in favor of the “Slow-Moving Avalanche” of socialism.

The telltale signs of the current shift came in the 2020 Presidential Primary where Democrats cast over 292,000 votes for 35 Democrat presidential candidates.  In the top three-front runners, Sanders received 76,286 votes, Buttigieg received 72,443 votes and Klobuchar received 68,818 votes, for a total of 207,547 votes.  In contrast, the Republicans (Trump) only received a little over 156,000 votes.

The Democratic turnout set record levels and exceeded the 2008 record.  New Hampshirites were really charged up with socialist Democrats in the presidential primary on February 11th, 2020, Democrats that have shifted so far left, they have entered the American forbidden zone of abject socialism.  New Hampshire, one of the 13 colonies that gave birth to American freedom, has joined the mad rush into socialism by naive’ millennials who can’t wait for Bernie Sanders to shower them with “free” health care, free college tuition, pay off all student loans, repeal the Electoral College, allow 16-year-olds and violent felons to vote, free health care to illegal aliens and God knows what else.

By now, most, if not all of the 13 colonies have gone socialist, including New Hampshire.  We’ve have outlined the reasons for this shift in numerous previous articles.  One of the main reasons for the shift is directly related to what happens to high-dense urban cities.  Large population centers, by their very nature, become dependent on government over time.  Dependency on government leads to socialism.  The more the people demand of government, the more government restricts and regulates their behavior.  The more the government gives, the more the people want

We explained further in a previous article entitled: “Urban Dwellers Won’t Save America, They’ll Destroy It.”

“Early America was predominantly an agricultural nation, in the years leading up to the industrial revolution.  An agricultural existence was subsistence on its raw edges for small farms all across the land.  Thus, with the promise of steady wages in manufacturing and out of the weather, the people came off the farms in droves and swept into the ever-growing cities for a better life, or so they thought.”

“Manufacturers built factories in large cities because of being able to access cheap labor.  In the early days of the industrial revolution, the employers egregiously exploited that labor.  From that exploitation came the unions and the adversarial relationship between employer and employee was born on a grand scale.  Both employers and employees became powerful.  Each used the government, local, state or federal, to gain the upper hand and the upper hand shifted back and forth on the winds of politics.”

“Big city governments got into the act in a big way, to answer the dependency of the big-city residents.  They had to keep the rising poor from rioting, so they increased welfare handouts to the poor and un-employed.  Big-city budgets started to rapidly balloon in the social sector.  Police, fire and other essential government duties started to take a back seat to social promises.  With the social burden came government employees to administer to that burden.  With higher densities came more laws and with more laws came more enforcement and with more enforcement came more government employees.  Government employees organized unions and started demanding greater wages and better benefits.  With higher wages and better benefits, city tax revenue was burdened even more.  Taxes were raised on everyone else to pay for the social welfare, higher government wages and better benefits.  Government and unions got even stronger.  Now we have dependent, dumbed-down poor and chronically un-employed, fully institutionalized in our big cities and a heavy, ever-growing tax burden to fund it all.”

Most of the American population is concentrated on the East Coast.  The highest population densities occur in New Jersey, Rhode Island, Massachusetts, Connecticut, Maryland, Delaware and New York, all states being part of the original 13 colonies.   That is where most of the votes are, with the exception of Texas and California.

Take a look at a night picture of the United States and see the concentration of light.  It is all concentrated East of the Mississippi River with the lion’s share of the light on the Atlantic Coast from New York up into the New England states.  That density of nightlight is emblematic of the density of population.

The East Coast (mostly New York City) is not only the financial center of America, it is also the communication center.  Most news comes from the four major most powerful television networks of NBC, CBS and ABC, and now Fox News, all centered in New York City.  The major news services like Associated Press and Bloomberg are located in New York City.

Even Wall Street, the alleged seat of capitalism, donates to and votes mostly Democrat.  Capitalism and socialism are like matter and anti-matter.  When they meet there is a terrible explosion.  In human terms, that explosion is massive riots and violence on the streets of big cities, as observed in France and other countries today.

The East Coast (mostly Washington DC) is the political powerhouse that rules the rest of the country.  What happens in New York City and Washington DC ripples throughout the entire nation.  But most of the Atlantic Coast has gone socialist.  The East Coast socialist bias permeates all news, finances, legislation and high court decisions.

The East Coast (Progressives, Democrats, Liberals in the 13 colonies) has given us the always-growing welfare state.  They have perpetrated one of the greatest frauds on the American people and most of the planet, the fraud of man-caused global warming.  Now they want to shove the “Green New Deal” down our throats and send us back to the dark ages.  Just imagine a life without cars and airplanes.

They have corrupted our public schools and academia with their Progressive agenda.  They have taxed and regulated us to death.

They have let our public infrastructure decay to the point it is a danger to life and limb.

They have allowed our borders to be overrun by illegal aliens, white slavery, human and drug trafficking, at a tremendous cost to the American taxpayer in financial, social, emotional, economic and job losses.

Their anti-American trade policies have driven jobs to foreign nations until Trump started bringing those jobs back to America.

They have nationalized America’s health care system under Obama Care and now want to dump a Medicare-for-all (single-payer) health care system on 330,000,000 Americans at an astronomical cost and loss of freedom and individual choice.

New Hampshire is just an integral part of this East Coast socialist, radical environmentalist and one-world-order cabal.  The thirteen colonies that gave birth to freedom have now given us the enemy of freedom, socialism.

We’ll begin to see which way the socialist wind is blowing in 2020 as more primary votes start rolling in.  The results of the Super Tuesday primaries will give us an indication on whether America is still a Constitutional Republic or a mob-ruled Democracy.

Virtually half of the American people are on some sort of government assistance and they will vote to preserve that assistance.  That means they will most likely vote Democrat.

Only about 53% of eligible voters vote in a presidential election year.  In a mid-term year, less than half of eligible voters vote.  Most of the people that don’t vote are on government assistance.  If all the people that don’t usually vote in a national election were to vote, the Democrats would win in a landslide.  That is how far America has slid towards socialism and the 13 colonies, including New Hampshire, led the way.  The cost has been the loss of individual freedom and liberty.