(TCP News)  Funny how the Left’s “damage control” would be for all “others” a reason to be suspended, banned, deplatformed, tossed into “Facebook jail,” ETC.

The release of the list of names concerning who requested the unmasking of former Lt. General Michael Flynn is big news, and it’s also, pay no attention to this news, and irrelevant news – it all depends on who you ask.

Politico (Leftico) certainly wasted no time in going to bat for Obama and Biden on this.

In recent days, the president has coined the term “Obamagate” to accuse his predecessor of seeking to undermine him and target his top associates — though he has struggled to articulate or prove any specific wrongdoing.

The Wall Street Journal’s Rebecca Ballhaus is another firefighter who’s trying to douse these flames by assuring us that unmasking occurs thousands of times a year to “better understand the context of intercepted conversations.” [Link] 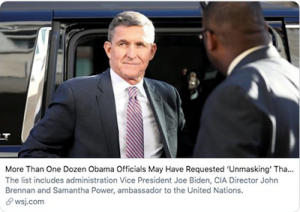 Sounds plausible correct?  Except that Rebecca is glossing over a few small details.

“May” have requested?  There is no “may” about it, they did request unmasking, period.  Low-and-behold, the WSJ “updated” their article and changed the title, note “may” IS in the URL (below) and the above tweet screenshot(preserved in case tweet is deleted), but it’s no longer in the article title on WSJ. [Link]

For the Leftist cabal, yes.

That sums it up well indeed.  What’s good for us is off limits for you.

Exactly, one day Biden knows nothing, next day – well, I may have heard about it. Uh huh.  TOAST.

The issue of unmasking being perfectly “normal” with regard to Michael Flynn is a blatant lie as far as I’m concerned.  First there is now (public) evidence that Flynn was deliberately set up and entrapped by the FBI.Second, Obama and company knew what was transpiring all along – by design.

Low-and-behold a Clinton appointed judge has challenged the decision to drop the Flynn case, AND has ordered another Clinton appointed judge to argue against the DOJ dropping Flynn’s case. Said judge just so happens to have written an op-ed highly critical of AG Barr’s decision to drop the charges against Flynn.  Perfectly normal, nothing to see here.

According to Sharyl Attkisson via The Hill:

Add to all this the report that, during 2016, the Obama administration vastly expanded its searches for information about Americans in the National Security Agency (NSA) database. In 2013, there were 9,500 searches involving 198 Americans. In 2016, that escalated to 30,355 searches of 5,288 Americans.

And then there is this:

From the Wall Street Journal:

The National Security Agency revealed to federal agencies the identities of almost 17,000 U.S. residents or corporations whose information was collected under a foreign surveillance law in 2018, registering about a 75% increase in unmaskings over the previous year, according to an annual transparency report released Tuesday.

So what is the difference here?  The first increase in unmaskings was under the Obama administration, the second under the Trump administration.  Obama and his inner circle weaponized the IRS, intimidated banks to drop customers, snooped on consumers through the CFPB (you can read about all of that here), spied on the Trump campaign, tried to destroy (interfere in) a presidential campaign in order to see Hillary elected, and the Obama holdovers have worked diligently ever since to remove Trump from the oval office from the day he set foot in it.

Who has Trump attacked or targeted, tweets aside of course – then again Trump’s tweets are more dangerous than the NSA is, that is if you are a Leftist Kool-Aid drinker anyway.

Consider also the following from The New York Times:

In a briefing with reporters, Alex Joel, the office’s chief civil liberties officer, cautioned against reading too much into statistical fluctuations, but said that one factor in the surge of unmaskings was that a handful of reports in 2018 contained numerous identifiers of Americans or American businesses that malicious hackers abroad had targeted.

“That could be an important factor in explaining the number here,” Mr. Joel said.

In addition to all of this I would point out that over thirty individuals requested the unmasking information regarding General Flynn (you can see that document here).  Why so many?  What reason was there for six different U.S. Treasury Department officials to request this information?  And of course Joe Biden requested this info when he was vice president, you know – the guy who said he didn’t remember anything about this?

Yeah exactly – move along sheeple, nothing to see here.

Asked by the network if he was responsible for the leaking of the contents of the documents that included Flynn’s name, the video went dead and the anchor was unable to get an answer to his question.

Funny how that happened right when Clapper was supposed to answer the one hundred dollar question now isn’t it?

One thing we can be sure of: General Flynn was taken out of the way by unscrupulous and deeply corrupt U.S. officials with Obama’s knowledge and blessing.

Justice needs to be done, and people need to go to jail.

Only in America: ILLEGALS Suing the U.S. Government Because They did not Receive Coronavirus Stimulus Checks

The MSM, Social Networks, & the Democrats Seem to Have the Hots for the Coronavirus – But I Don’t Want to Play Anymore