Closing a 13-point deficit in four weeks, the originally dark-horse GOP candidate, Sam Carpenter, has taken a decisive lead in the race for the Republican nomination for Governor of Oregon, according to the results of the latest survey from Triton Polling and Research.

In this major scientific poll, conducted among more than 2,000 Oregon likely voters, Carpenter edges out establishment-backed Oregon State Representative Knute Buehler by a fraction of a point, 23.1% to 22.9%, said friend and law-enforcement/intelligence colleague, Dr, Lyle Rapacki.

The surprising poll comes a month after a Feb. 26, 2018, Triton poll, taken shortly after Wooldridge entered the race, showed Buehler leading Carpenter 31% to 18%, with Wooldridge emerging at 8%. Carpenter is now trending steadily upwards as his competition falls. 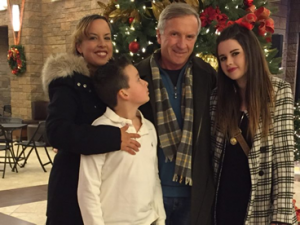 “As we had planned from the beginning, we are gaining powerful momentum at this critical point in the race,” said Carpenter, a Bend-area businessman and turn-around specialist running on a Trump/Pence-like platform to Make Oregon Great Again.

“Oregon Republican voters share our conservative values,” Carpenter continued. “They want a nominee who is pro-life, pro free-enterprise, tough on immigration, supports the Second Amendment, and who stands with our Republican President, Donald Trump.” Voters may also be showing displeasure with Buehler, who has recently come under fire for skipping debates and candidate forums with Republican groups. Oregon state Rep. Knute Buehler, long regarded as the front-runner in the race to win the Republican gubernatorial nomination, is irking many of the party faithful by skipping a string of GOP candidate forums.

“It is raising a lot of questions,” said Baker County Republican Chairwoman Suzan Ellis Jones, after Buehler was a no-show at an event this week sponsored by her county party. “People are asking why. You know, it’s peculiar.” In recent weeks, Buehler also did not attend similar Republican forums in Linn and Marion counties as well as at the Republican state convention in Lebanon on March 17 — although he was at a social event where the candidates had a chance to talk the night before, according to state party spokesman Kevin Hoar. His rivals are starting to take notice.

The poll also showed Carpenter performing best of the three candidates one-on-one against incumbent Governor Kate Brown. In this hypothetical matchup, Carpenter defeats Brown by over 5 points, 45.8% to 40.5%. “These numbers dispel the decades-old myth that it takes a moderate Republican who panders to the Portland elite to win,” said Carpenter. “We are winning this primary race by energizing the conservative Republican base and speaking for all of Oregon.”

Now, with this fifth scientific poll of likely Republican voters, conducted in the last days of March, the Carpenter campaign has taken a substantial leap forward. In a period of just four weeks, Knute Buehler fell by 8 points, while Sam gained over 5 points. This is a 13-point swing in less than four weeks, putting the Carpenter campaign into a slight lead – 23.1% to 22.9%! Over the same period, Greg Wooldridge’s campaign has surprisingly crashed and burned. Wooldridge’s support has been cut in half, down to just 4%. From the beginning of the campaign, back in September, our strategy was to ramp up to a modest and growing lead by early April. We did not want to peak too early. And our aim from the start has been to spend less than $100,000 of our total $250,000 primary race budget in the first six months of the campaign – and then aggressively pump the remaining $150,000 into the last two months, when voters will be paying serious attention to individual candidates. 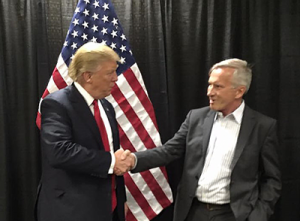 We began that assertive effort March 19th. There is another part of our strategy that has also worked out as-planned. Instead of focusing on fund-raising over these past six months, Sam has spent his time talking with voters – individually and in groups – sharing a consistent message of principled, pragmatic conservatism. Republican voters want to see a candidate who is pro-life, who will defend the right to keep and bear arms, who opposes sanctuary state status, and who supports our President, Donald Trump. See where Sam stands on the issues – Sam IS the conservative candidate who represents real Republican values, and all of the great Oregonians who share them.

Since early September, Sam has expended the majority of his time in communicating one-on-one with Oregon voters. We estimate that over this period, he’s made personal connections with over 100,000 individual Republican voters. The polling shows that voters are responding well to Sam’s open communication, transparency, and willingness to engage. What else did the poll show?

It’s clear that voters who had previously supported Knute Buehler are now starting to reject him. They don’t like that he’s skipping debates (see the Jeff Mapes article), and that he has been focusing more on raising money than on connecting with his own party faithful. And many who initially supported him based solely on name recognition, or his previous alleged “front runner” status, without really knowing him, changed their minds the more they learned.

This important point is sharply evident in these latest poll results. Questions Q8 and Q18 are precisely the same question, and in-between are questions that illustrate some of the main positive and negative aspects of each of the three candidates. Compared to Q8, the answers to Q18 shift dramatically in our favor. (Our goal here with questions Q9 through Q17 was to measure how different messaging might affect voter reaction to each campaign, including our own. We think you’ll see the questions are fair, designed to gauge reaction to valid personal positions and history, rather than to elicit a biased response.)

What happened to Wooldridge? That’s hard to say – but it’s clear that despite an initial splash when he entered the race in February, he has failed to catch on with voters. And what about the large number of undecided voters? Many have been watching and waiting to see how the campaigns progress, and which candidate looks strongest to defeat Kate Brown.

That brings us to another important point: Part of this latest Triton poll matches each of the top three Republican candidates in potential head-to-head races with Governor Brown, with a sample of over 2,000 voters that accurately represents the demographics of the general election. Guess what? ALL THREE Republican contenders beat her – that’s great news for Republicans across the state. But even more telling, Sam defeats her by the largest margin – over 5 points. You read that right: outspoken CEO, conservative political outsider, and unabashed Donald Trump supporter Sam Carpenter has the largest projected margin of victory over the sitting progressive far-left governor, Kate Brown.

Once and for all, this dispels the myth that an Oregon statewide candidate must “swing-left” to win the general election. Over the next several weeks, a heavy majority of undecided voters will move our way. Many have been waiting for a signal that a leader is emerging. Others have already rejected Knute Buehler, but didn’t know enough about the other choices yet to make a decision.

These are the people we are focusing on now in our aggressive multi-media campaign that began mid-March (that includes radio, television, thousands of yard and field signs, volunteer door-knocking and phone-calls, mail, bulk brochure and voter pamphlet distribution, a coordinated letter-writing campaign, and telephone outreach – in addition to our continued focus on social media).

And it’s not just Republicans, either. As the internal numbers on the polls show, significant numbers of Independent/non-affiliated voters – and even more than a few Democrats – will choose Sam over Kate in November. These voters are not going to miss this train…. What is the most amazing thing about all this? We’ve achieved the lead spending only 10% of what Knute Buehler has spent. So far, the Buehler campaign has fruitlessly expended well over a million dollars while we’ve carefully spent just over one hundred thousand. It really is a new era in politics!

How could we possibly be in the lead after having spent so little? It’s the powerful message of course, but especially because Sam has been the CEO of his own campaign, insisting on super-efficiency as he’s carefully led a tight team of managers and volunteers. Creating organizational efficiency is what he does for a living, and he’s very good at it – and as CEO of Oregon, he’ll apply the same methodology to our Salem government.

He says, “I can’t wait to get into the middle of the Salem swamp, to lead the charge to get that bloated monster under control!” (Learn more about Sam’s background as an organizational turn-around expert on his website, www.workthesystem.com.) So, now we begin to focus on the long-goal: defeating Governor Kate Brown. And current polling notwithstanding, we know it’s going to be an epic battle – Brown will have the full support of the media, the unions, and her minions in the Oregon Deep State. And she, and the 15% of voters who make up the no-compromise progressive far-left contingent, will ruthlessly unleash their Clinton/Alinsky-style assaults on all of us.

That’s OK! We’ll be hammering back with equal fervor. In any case, no matter the degree of our success in this primary race, we still must raise a 3-million-dollar war chest to defeat Kate Brown and her progressive far-left in the general election this November. In our estimation, Brown will raise 12 million dollars or more.

Yes, we can remove Governor Brown for a fraction of what she herself will spend. But further, understand this: in the process of beating Kate Brown, we’ll also create an Oregon Red Trifecta, where all three branches of the Salem government will once again be Republican-controlled. The world will be watching as Oregon suddenly transforms into a red state. And this startling transformation will be no less than a dagger in the very heart of progressive liberalism in America.

So NOW is the time for you to help! Send us your contribution today, and get behind our campaign so we can take back control of our government from Kate Brown and the failed progressive far-left – and let’s Make Oregon Great Again!  https://youtu.be/4IaAyWzDUtg