After three years of trying to nail President Donald Trump on bogus charges during two failed attempts at impeachment, the Democratic Party — especially Speaker Nancy Pelosi and her inner-circle of liars, leakers and thugs — as well the dishonest news media are seeking to turn an international disaster into a political sledgehammer to use against Trump in the upcoming 2020 presidential election against the invisible man, China’s true foreign agent Joe Biden.

Speaker of the House Nancy Pelosi, D-California, is creating an ad-hoc committee to investigate and provide Democratic Party oversight of the Trump administration’s handling of the COVID-19 crisis. “This is once again a way for the America-hating leftists to gain access to material to leak to their propagandists at CNN, MSNBC, New York Times and Washington Post,” said a former assistant district attorney, who served a Democratic Party’s Minnesota district attorney.

According to Fox News Channel’s Steve Hilton, Pelosi claims this latest attack on the Trump White House and the Republicans will make certain the billions of taxpayer dollars set aside for relief money was spent the way it was supposed to. “Once again, Speaker Nancy the Hypocrite is playing games. She wants the COVID-19 emergency cash to go to abortion clinics, cultural institution like Lincoln Center in New York, and help in feeding and housing illegal aliens,” said Daniel Franco, a counter-terrorism and WMD specialist for a number of local police and sheriffs’ departments.

“We must make sure that the historic investment of taxpayer dollars made in the CARES Act is being used wisely and efficiently to help those in need, not be exploited by profiteers and price-gougers,” Pelosi wrote in the letter late last month, according to Fox News Channel’s Life, Liberty and Levin.

Seven members of the Covid-19 ad hoc committee whom she selected were Democrats. The committee’s chairman will be House Majority Whip James Clyburn, the South Carolina Democrat best known as the politician who is the likely replacement for the late Elijah Cummings, who was active in covert schemes to silence conservative groups using President Barack Obama’s Internal Revenue Service. 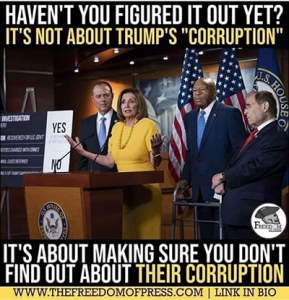 According to GOP Rep. Guy Reschenthaler of Pennsylvania, a legitimate Republican investigation of a New York firm that allegedly sent money to the Wuhan Institute of Virology — believed to be the source of the virus — has been stonewalled by Pelosi and House Democrats.

In a related story about more Democratic Party lawlessness, Rep. Adam Schiff, D-California, in what may prove to be a violation of federal law,secretly subpoenaed the private phone records of innocent Americans and then published the information.

In response, a public-interest law firms filed a lawsuit against Schiff and what is still being called the House Intelligence Select Committee on Intelligence for the controversial subpoenas issued for phone records, including those of former New York City Mayor Rudy Giuliani, who now serves as President Trump’s lawyer.

Schiff is currently serving as the Chairman of the House Permanent Select Committee on Intelligence. “Unfortunately, Schiff and his radical cohorts have turned that committee into The Destroy President Donald Trump At All Costs Committee,” said former police commander Reggie Townson.

“The records are of critical public importance as the subpoenas were issued without any lawful basis and violated the rights of numerous private citizens.

“Disclosure of the requested records would serve the public interest by providing information about the unlawful issuance of the subpoenas.

“The requested records fall within the scope of the public’s right of access to governmental records as a matter of federal common law.”

“What else is Mr. Schiff hiding? He and his committee ran roughshod over the rule of law in pursuit of the abusive impeachment of President Trump. This lawsuit serves as reminder that Congressman Schiff and Congress are not above the law,” noted Tom Fitton, president of Judicial watch/.