One of the most often quoted statements attributed to the father of Communism, Karl Marx, is that Religion is the opium of the people, a translation of his German statement “Die Religion … ist das Opium des Volkes.”

In a 25-page letter delivered to Francis last month and provided Saturday to The Associated Press, the 62 signatories issued a “filial correction” to the pope — a measure they said hadn’t been employed since the 14th century. 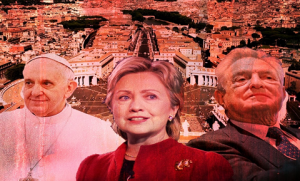 Under Pope Francis, the Roman Catholic Church has been subtly changing the Holy See’s positions on the definition of sin. He has also opened the Vatican’s doors to some of the most radical people one can imagine such as the multi-billionaire leftist George Soros and his henchman and associates.

Instead of speaking out against America’s abortion industry or issues such as transgender bathrooms and same-sex marriage, this Pope has condemned people who are prosperous and successful, sided with illegal immigrants even though they break laws, and suggested the church should be a refuge for the poor.

Pope Francis — who has become the progressive and far-left Democrats’ favorite Pontiff –reportedly “sidelined conservative cardinals, installed like-minded allies in key jobs, taken personal control of the Knights of Malta for defying him, and generally sent the signal that behind his amiable smile and humble talk lurks a radically liberal agenda,” according to Fox News and Newsmax.

What troubles many Catholics in the United States is the Church’s adversity towards President Donald Trump and his stands on U.S. sovereignty, border security, illegal immigration and radical Islam. “There appears to be no doubt that Francis dislikes Trump who is pro-life, charitable and given to personal expressions of being a Christ-centered American. The Pope despises Trump but supports and likes Hillary Clinton, who believes in government-paid abortion programs, and who can’t get through one day without lying and proved herself to be a greedy and hugely dishonest politician who bilked Haiti’s suffering population out of millions of dollars in aid money. Her? The Pope likes. Her and her adulterous husband,” said former police captain Charles McMillan, who claims to be a devout Catholic and whose brother is a Catholic priest.

During President Trump’s first year in the White House, the United States is dealing with what’s arguably the early stages of rebellion.  Political turmoil and social tumult followed eight years of a federal government run by aging campus-radicals such as President Barack Obama and his appointees who openly defied the U.S. Constitution. They were aided by members of the mass media and big-pocketed radicals such as multibillionaire George Soros

For example, while preparing for a Papal visit to North and South Americas, the Pope’s minions working in the Vatican went out of their way to get cozy with what’s commonly called the radical fringe of the U.S. Democratic Party.

“Basically, from what we’ve gleaned from the Wikileaks and DCLeaks material, the Pope is actually colluding with one of the world’s wealthiest — some say wickedest — neo-Socialist who is hell bent in creating a single ruling entity for the entire planet. His vision dwarfs even the world described by George Orwell in his cautionary tale 1984,” claims political consultant and attorney Michael Baker.