Let every nation know, whether it wishes us well or ill, that we shall pay any price, bear any burden, meet any hardship, support any friend, oppose any foe to assure the survival and the success of liberty. John F. Kennedy 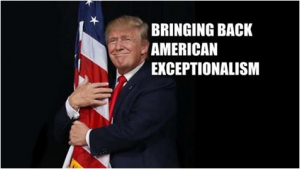 When the American spirit was in its youth, the language of America was different: Liberty, sir, was the primary object. Patrick Henry

John Kennedy was a Democrat president who today sounds more like a Republican than our Republicans.  Liberty…yes liberty, that is what America has meant and needs to mean again.  We have a chance to bring our country back to glory, freedom and yes, liberty, but it’s up to all of us, not just the President we soundly elected.

I am the same age as our President.  We were both born in 1946, and we both saw the best of this country in our youth. This man who gave up years of his comfortable life with his family and prosperous business did it to try to save the America he knows and loves, the America of our youth.

His memories of being raised in New York are probably different than my memories of being raised in Chicago, but I wouldn’t think they’re that different.  We both loved John Wayne, and we both knew all the celebrities in this two-minute video made 47 years ago in the closing scene of Wayne’s show, “Swing Out Sweet Land,” where they sing Irving Berlin’s God Bless America!  This video is baby boomer nostalgia for what our country once was…

We have been blessed with someone who wants to take us again to glory, and if we don’t help him, then we are just as guilty as the globalist insiders who are willing to destroy this great nation for their own personal gain. 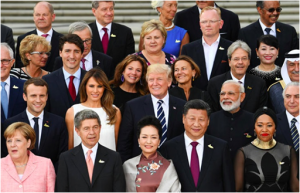 At the recent G20 summit in Hamburg, Germany, leaders were gathering for a photo op, and were sporting a G20 pin on their lapel.  Not Trump. He was wearing an American flag, and I was so proud of him.

This article will not be like my normally researched articles.  Why?  Because one of the finest education researchers in America who I have long loved and respected recently told me that she would not again vote for President Donald J. Trump.  She is not the only one, but the fact that she has joined the ranks of these people who are one-issue voters makes me so very sad.  She stated that she felt someone else would run who would be better.  There is no one else.  Another Trump would be an anomaly, unless it’s Donald Jr.

Don Jr. is being excoriated for another false Russian story which now makes my eyes glaze over.  Wonder why?  They want to destroy him, because Don Jr. is even more of a conservative ideologue than his daddy, and he has political aspirations, and I love the guy!  Even Maggie Haberman of the NYT’s says this latest story is bunk. She’s right and I won’t waste ink on anymore of this media garbage.  Nevertheless, be prepared for a full four years of this media bull dung.  There is NO EVIDENCE of collusion.

Another dear friend who I have loved and honored for 30 plus years never voted for Trump because he is wrong on education, and I agree with her, but she has divorced me because I supported Trump.  Her close friend wrote me some of the most odious emails because I would not “dump Trump.” This person even said she’d prefer Jeb Bush!  The choice of Betsy DeVos was horrid, but believe me, Samuel Blumenfeld makes it clear that education has been dying in America since the late1800s.  Educate your children at home like my neighbors have done, and save them from the filth of common core and charter schools promoted by lying devious Betsy DeVos.

I hate to tell my friends, but there hasn’t been anyone better in our White House since Calvin Coolidge.

Did you expect our President to be perfect?  If you did, you were whistling in the wind.  No one is perfect, but I thank God every single day that it is not Hillary Rodham Clinton who is again in our White House.  I suffered through this woman in high school and as a fellow Goldwater girl, and I don’t want her anywhere near our government ever again.  She is an abomination to the freedom and liberty our founders bestowed upon this wonderful country.

I hear people saying Trump hasn’t built the wall, he hasn’t repealed Obamacare, he hasn’t dumped NAFTA.  And just who does he need to help him do this?  The Congress!  And we know many of our so-called conservatives are nothing more than Democrats in Republican drag.

Every person who voted for Trump has two Senators and one Representative.  That’s three people in Congress that should be called, emailed and harassed into doing what our President promised he’d do.  If you detest Betsy DeVos, then call Congress, emailing each other about how vile she is doesn’t get rid of her.  It’s all up to us to help this President, and to educate him. 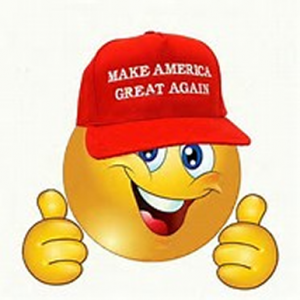 In six months, the accomplishments of our 45th President are staggering.  We should be rejoicing!

We no longer have the horrid TPP trade deal which would have absolutely destroyed our sovereignty.  Trump was right about TPP and China.  Thank God, it’s gone.

We no longer have the UN Paris Accord climate deal that would have skyrocketed our energy costs and destroyed our sovereignty. [Link] Thank God, it’s gone.

Refugees entering America have been stopped from six countries, albeit it took the Supreme Court to overrule the lower courts filled with Bush, Clinton and Obama appointees.  Trump’s immigration plans are forging ahead. [Link]

Trump overturned The Johnson Amendment with an EO, allowing the pulpits the freedom to speak.  So, why aren’t they?

Trump has advanced pro-life policies. [Link] Save the baby humans!

There are so many other accomplishments.  Check out the sub-lists of his continuing achievements.  This is a reason to smile!

Trump and Putin had a cordial two-hour meeting while in Hamburg at the G20 meeting.

Jackie Calmes at the LA Times said she was saddened to see Putin not looking confident when he met Trump, as he had when he met Obama. She expected a steely confidence from Putin, and she didn’t see it, and she was distressed. She said she was surprised.

I’m not surprised because I believe these two men will respect each other.  All the phony Russian involvement in our election has moved the left to want war with Russia.  That’s the last thing we need.  Tomi Lahren believes that the left wants to start aggressions with Russia because Podesta and Wasserman Schultz couldn’t protect their emails.

How quickly they forget the Clinton relations with Russia when Hillary sold them 20% of our uranium and made herself a fortune for the Clinton Foundation, and Bill got $500K for a speaking engagement…of course, that’s okay.

When Russia Was Our Ally

Let’s go back to the late 80s and look at some of our WWII survivors from both Russia and America.

An American film crew accompanying Ronald Reagan on his 1988 trip to the Soviet Union chanced upon an amazing story.

Contacted by a Russian dentist in Moscow, he told them he wanted help reaching out to the Americans who had helped him and his comrades survive terrible conditions in German POW camp Stalag III B.

Each Friday in the camp the Americans received 5 kilos of food from the American Red Cross.  The Russians only received one liter of turnip soup and one liter of water from the Nazis.  They were dying of starvation, and when one of them passed, they would carry out the dead soldier to be counted so they would get more food.

The Americans could see this, and two American brothers got together with the Russian dentist and figured out a way to smuggle food to them.  After the guards passed at night, the Americans would throw food over the fence to the Russians.  If they had been caught, they’d have been killed immediately.

When the Nazis found out, they had all 8,000 American prisoners stand in the hot sun for three hours demanding to know the Russian behind the scheme.  They never spoke.

The dentist whom the Americans loved and did not betray wanted to find out if any of the men were still alive, and gave their names to the reporter.  He had taken an oath to find and thank those Americans.  Watch what happens…it’s only 10 minutes long, and amazing.

It turned out to be an incredible tale of cooperation and human sympathy whose lesson is badly needed today.

Don’t miss this video, it’s an incredible and beautiful story of compassion to humanity.

Fellow writer, Lloyd Marcus, had a recent article entitled, Tweet On, Mr. President, and I fully agree with Lloyd’s take on Trump’s tweets.  Here is the first paragraph of his article.

President Trump is criticized from all sides for sparing with fake news media via tweets. Some say Trump’s tweets are a distraction from getting out his message. The truth is fake news media are relentlessly 24/7 distorting and misrepresenting Trump’s agenda and message. Tweeting is Trump’s direct line to the American people which is the reason his tweets infuriate and frustrate fake news media. 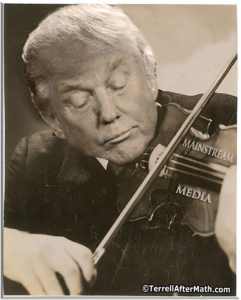 Oh yes, tweeting is the President speaking directly to the people, and the media is infuriated because they can’t spin it before the people get it.  Trump is playing them like a fiddle, and it’s made me laugh many times over.

There is no reason he can’t speak to us directly, and neither is there any reason he should stop.  Donald J. Trump is a blue-collar billionaire.  He’s one of us, and he talks like regular Americans talk to each other.

Support our President-Contact Congress, tell them to fight!

Republicans are AWOL on standing up for our president who is doing his best to create jobs and protect America. Shame on them!

P.S.  We must fight for what is right, if we don’t, then the loss of this great nation will be on our shoulders.  The same goes for NewsWithViews.  It is up to all of us to keep the free flow of information available.  Thank you for continuing to help NWVs stay alive and coming into your mailbox every morning.  You can donate here.