When asked how they managed to stay together for 65 years, the woman replied, “We were born in a time where if something was broke, you fixed it…not throw it away.”  —Anonymous

We must dare to be great; and we must realize that greatness is the fruit of toil and sacrifice and high courage.  —President Teddy Roosevelt

I shall set my course to the end that no man need fear to speak the truth. I could not do less, for the opportunities for service my country has given me and the honors it has conferred upon me have imposed an obligation which is not discharged by the termination of public service.  —General Douglas MacArthur

Duty, Honor, Country, those three words reverently dictate what you ought to be, what you can be, and what you will be.  —General Douglas MacArthur

As I said in my last article, Americans need to get back to work.  We are not ones to sit idle, we have to work, we have to be active, and we do not want to be holed up in our homes for weeks on end because of fear, hysteria and panic.  That’s not our America. Our America needs 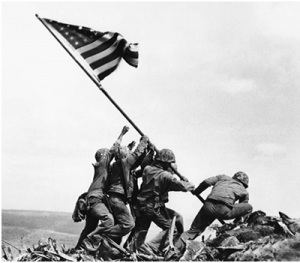 to be the America that General MacArthur and all those like him fought to preserve for our descendants. The real Americans are those who on Iwo Jima raised our grand old flag.

There is a strength born of our heritage even in our youngsters that once again needs to be nourished to blossom into the patriotic and stalwart hearts for America who will protect her liberties and freedoms unto death.  Americans never quit, not ever…and neither shall our children and their children.  Our Judeo-Christian faith and patriotism shall endure.

Today, the 24th of March, 2020, President Trump said that he wants the shutdown over by April 12th, and that’s fine with me because that covers both Passover and Easter. Yes, there are probably more people who will become ill with this virus, but it is nothing like the devastation of our yearly flus that kill thousands and put half a million in hospitals.

What we’re dealing with today, is actually miniscule compared to the viruses of the past and our yearly flus.  Yet, the mainstream media has blown everything out of proportion via propaganda and brainwashing in order to destroy Trump’s legacy of a soaring economy and a 3.7 percent jobless rate last November, the lowest level since December 1969.

We’re strong, we’re survivors, and we need to teach our young to be like those from our “greatest generation.”   My parents and my grandparents on both sides were from that wonderful generation, they worked hard all their lives and survived countless challenges before they went home to glory.

Both of my grandfather’s fought in WWI and their sons fought in WWII. My mother’s oldest brother even hitchhiked across Czechoslovakia to meet up with his cousin, both of whom were in the Army. My paternal grandfather fought in both WWI and WWII; he re-upped at age 50 for WWII.  My family, like so many others, went through the 1929 and 1931 depressions.

My maternal grandparents kept their dairy farm by paying the bank only the interest, which actually was quite high for those years, at seven percent.  And yes, they had plenty of chalk marks on their fences.  Those chalk marks were put there by those who had no home, no job, no food and it let others like them know that if they stopped and offered their services, my grandparents would feed them for help on the farm, and feed them well.  Unemployment was at 25 percent during these years.  The unemployed slept wherever they could during this time…in hay bales, in ditches, under bridges, and in places we’d never think of sleeping.

Those past Americans were strong, they were survivors, and we are too, but many of our children and grandchildren don’t know sacrifice, 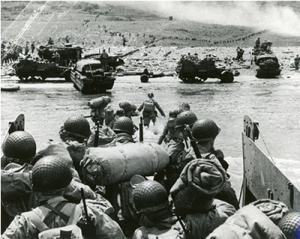 they never have. Only those who put their lives on the line through our military service know true sacrifice, and many have come home as disabled veterans.  Too many of today’s young people would never be able to face what 18 to 21-year-olds were sent into battle to do in June of 1944 when they landed on Omaha Beach in Normandy where so many died.  D-Day was hell and death for too many of our youngsters that day on Omaha Beach.

Apart from faith in God and obedience to Him, there is no ultimate security, might or power to sustain a great culture, civilization, or military supremacy, however advanced they may be.

America has her heroes, those who made the ultimate sacrifice for their country…so many who never came home to their families. There are 71 living Medal of Honor recipients who belong to MOH soldier, Gary Luttrell’s Tribute to Valor Foundation. Please watch this short three-minute video by Gary about these men who have given so much for our nation.  This “Tribute to Valor” asks the question, “Who Am I?”

These soldiers and their brothers in arms truly represent the history of our great nation. Will future generations follow them?  I believe they will.

Not long ago I received the following email that told of today’s young.  Yet, I feel there is a core underneath their exteriors, a core that belies their dumbed down education and their faithless love of God and our nation, a core that will rise to protect and defend our country, a core they may yet not know exists in their hearts.

I received this email a few days ago, and wanted to share it because it speaks of truth.  Here is what an 80-year-old man said when asked if there was anything he needed to help him during this Covid-19 scare gripping America.

When asked, he simply smiled, looked away and said:

I need to know this generation will quit being a bunch of sissies…that they respect what they’ve been given…that they’ve earned what others sacrificed for.

The old man continued while the gentleman who asked sat there, quietly observing.

You know, I was a little boy during WWII. Those were scary days. We didn’t know if we were going to be speaking English, German or Japanese at the end of the war. There was no certainty, no guarantees like Americans enjoy today.

And no home went without sacrifice or loss. Every house, up and down every street, had someone in harm’s way. Maybe their Daddy was a soldier, maybe their son was a sailor, maybe it was an uncle. Sometimes it was the whole damn family…fathers, sons, uncles…

Having someone you love sent off to war…it wasn’t less frightening than it is today. It was scary as Hell. If anything, it was more frightening. We didn’t have battlefront news. We didn’t have email or cellphones. You sent them away and you hoped…you prayed. You may not hear from them for months, if ever. Sometimes a mother was getting her son’s letters the same day Dad was comforting her over their child’s death.

And we sacrificed. You couldn’t buy things. Everything was rationed. You were only allowed so much milk per month, only so much bread, toilet paper. EVERYTHING was restricted for the war effort. And what you weren’t using, what you didn’t need, things you threw away, they were saved and sorted for the war effort. My generation was the original recycling movement in America.

And we had viruses back then…serious viruses. Things like polio, measles, and such. It was nothing to walk to school and pass a house or two that was quarantined. We didn’t shut down our schools. We didn’t shut down our cities. We carried on, without masks, without hand sanitizer. And do you know what? We persevered. We overcame. We didn’t attack our President, we came together. We rallied around the flag for the war. Thick or thin, we were in it to win. And we would lose more boys in an hour of combat than we lose in entire wars today.

He slowly looked away again, but there was a small tear in the corner of his eye. Then he continued:

Today’s kids don’t know sacrifice. They think sacrifice is not having coverage on their phone while they freely drive across the country. Today’s kids are selfish and spoiled. In my generation, we looked out for our elders. We helped out with single moms whose husbands were either at war or dead from war. Today’s kids rush the store, buying everything they can…no concern for anyone but themselves. It’s shameful the way Americans behave these days. None of them deserve the sacrifices their granddads made.

So, no I don’t need anything. I appreciate your offer but, I know I’ve been through worse things than this virus. But maybe I should be asking you, what can I do to help you? Do you have enough pop to get through this, enough steak? Will you be able to survive with 113 channels on your tv?”

The gentleman smiled, fighting back a tear of his own…now humbled by a man in his 80’s. All he could do was thank him for the history lesson, leave his number for emergency and leave with his ego firmly tucked in his rear.

That gentleman talked to a real man…an American man from an era long gone and forgotten. We will never understand the sacrifices. We will never fully earn their sacrifices. But we should work harder to learn about them. Learn from them…to respect them.

Our America still has the seeds of faith, the seeds of patriotism, and the seeds of honor and glory.  She still stands for truth and righteousness.  Teach your children the history of the many sacrifices of those who came before us…go back all the way to our founders and how much they sacrificed to give us liberty and freedom.  Instill in your young, the truth of America, and what she has given her people, more than any other nation on earth…the many freedoms granted by God.  Teach them from their very youth…it will save our country, our descendants and our future and will ingrain in our young the truth of America’s glorious founding that was so blessed by God.

And how blessed we are to have a president who loves America and her people. He is young by today’s standards, but he knows our history and the glory of our nation. He needs the strength of Samson, the wisdom of Solomon, the patience of Job and the counsel and guidance of the Lord God Almighty.  Pray for him as he does battle to save the nation.