Just a few months ago, in an article entitled “Still the Smartest Guy in the Room,” I wrote the following about President Trump:

Well, whaddaya know? In the midterm elections of November 6, 2018, the American people rewarded the president—for only the third time in almost a hundred years—with a net gain of three and possibly four Senate seats, lost half the House seats that his predecessor lost, and left the radical leftwing Democrats not rejoicing at their meager gains, but still chomping at the bit to bring down the president who has effectively destroyed everything they believed in, worked for, and thought they achieved over the past 75 years.

Yes, President Trump posed a mortal threat to the Left’s very raison d’être––a globalist one-world order controlled by them! And so way back in 2015, when he announced his intention to run for the presidency, the “connected” guys of the D.C. swamp ––to use the vocabulary of the mob––decided to pool their formidable resources to “clip” the billionaire business mogul, if not physically (although I wouldn’t put it that past them), then by proving that their manufactured fiction of candidate Trump’s collusion with Russia to win the presidency was, in fact, true and therefore impeachable. 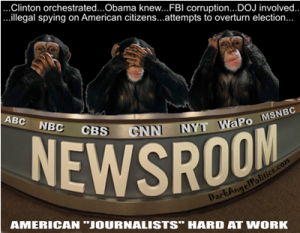 In that article, I listed all the fanatical Detectives Javert––the top dogs at our top-secret intelligence agencies (and many of their wives who also played central roles)––and elaborated on their impressive credentials, privileged educations, vast experience, and, oh, their appointments to high office by the former occupant of the Oval Office, Barack Obama.

Special Counsel Robert Mueller took his time––more than two years––as he hired almost two-dozen partisan Democrats (who contributed to the Obama and Clinton campaigns) to join his “objective” truth-finding effort. Here is a breakdown of the invasive colonoscopy he performed on the President of the United States.

The net result, as we all now know––the president committed no collusion and no obstruction, although the Regressives who continue to pursue some bogus crime––I refer to the obsessed Representatives Jerrold Nadler (D-NY), chairman of the House Judiciary Committee, and Adam Schiff (D-CA), chairman of the House Intelligence Committee, and a few others, who, as they say, can’t let go!

But why? Most of these people once figuratively kissed the ring of businessman Donald Trump when he was a Democrat and they groveled for the campaign cash he generously doled out and lusted for an invitation to play golf with the mega-mogul or to dine in the company of his exquisite wife at the palatial Mar-a-Lago resort or at numerous other residences, including his Manhattan penthouse in Trump Tower.

Why then the wild-eyed, ferocious animosity when he announced for the presidency and––to their horror––was elected America’s 45th president?

IT’S NOT ABOUT THE BENJAMINS, BABY!

In most cases in politics, when you peel back the layers of the onion, it’s all about the money. But not in this case.

And it’s not about the bogus excuse that Hillary lost the election. Most people can’t stand the woman. While some women would have reflexively voted for any person with the right plumbing, who can take feminists seriously anymore, now that they’ve embraced infanticide as a “human right”? In truth, most people cringed throughout Hillary’s coughing-fit, seizure-plagued, issue-impoverished campaign and were––and are––happy, finally, to have her off the national stage.

And it wasn’t candidate Trump’s “treatment” of women or his locker-room talk, when Americans had already endured eight years of Bill Clinton spitting in Hillary’s face every day with his serial philandering or, without his Secret Service detail flying 26 times on the “Lolita Express” to Jeffrey Epstein’s private island.

And it wasn’t the right-of-center platform candidate Trump was running on because Democrats had already raised to an art form the softening up and watering down of other Republican presidents’ wish lists. And they’d already succeeded in inflicting Americans with socialized medicine (Obamacare) and socialized education (Common Core), with degrading our military, contaminating the public imagination with the hoax of global warming, and actualizing the Cloward-Piven strategy to overload the welfare system by establishing Sanctuary Cities with the  goal of segueing from socialism to their preferred system of government, communism.

And it wasn’t about the power of the media to shape/influence/determine public opinion. As I wrote in a former article, “Media Whores,” people who have the conceit to call themselves journalists are really employees who take direct orders from their employers. Today, only six media empires rule radio, TV and print publications––five of them run by globalists and only one by soon-to-retire conservative Rupert Murdoch (Fox TV, the NY Post, the Wall St. Journal, et al)––and now by his liberal sons, Lachlan and James…hence the unfortunate leftist infiltration of Fox.

And it wasn’t even my original theory, which was that Mr. Trump threatened to disrupt the globalists’ One World Order. The powers-that-be in the D.C. swamp are too arrogant and narcissistic to entertain the notion that a single individual could upset their decades-old, carefully constructed apple cart.

None of these things inspired the predatory animus of the Democrats that we’ve witnessed for the past three years. Instead, as candidate Trump’s campaign proceeded and he summarily withered “Low-energy Jeb,” “Lyin’ Ted,” “Little Marco,” “Crooked Hillary,” “Crazy Bernie,” “Pocahantus,” on and on, a cold chill began to rise in the ranks of the left: Nothing can touch this guy!

They knew that the brash billionaire certainly couldn’t be bought by lobbyists or Arabs––Qatar is but one dramatic and damning example––like so many of our legislators have been. 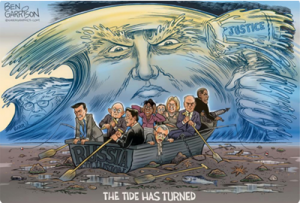 They saw that even before the election he could single-handedly destroy a hot career like Megyn Kelly’s.

And nothing they threw at him succeeded in denting the natural ebullience and epic energy that infuriates them to this day.

And then it happened! The Kiss of Death, so to speak––the nine words that locked the Regressives in combat with candidate and then President Trump forever.

It was in early October of 2016 when Mr. Trump was engaged in one of the campaign’s many debates that he said the following: “If I were president, Hillary would be in jail.”

That was it––simple as that!

Now you know what this three-year safari for Big Game has been all about! It’s been about all the deeply corrupt––indeed criminal––swamp creatures creating so much chaos, so many dirt roads, so many bogus accusations and innuendos and tabloid headlines in order to keep the real collusion experts and the real obstructers of justice out of the spotlight, out of the courthouse, and out of Leavenworth! 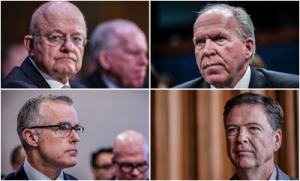 There are so many crimes––or potential crimes––involved in what the Obama White House orchestrated through his Justice Department and FBI (among other departments) that it’s impossible to list them all.

In a stunning analysis in the World Tribune entitled Justice: Suddenly, the hunters have become the hunted, historian Victor Davis Hanson is quoted as saying that those “who cried the loudest about leaking, collusion, lying, and obstruction are themselves soon very likely to be accused of just those crimes.” Among them, Hanson lists the following:

Hanson has also written at length about the bogus Obstruction of Justice accusation, the illegally obtained FISA warrants, the phony Steele dossier paid for by Hillary Clinton, the fishy “coincidental” meeting of Bill Clinton with AG Loretta Lynch on a Phoenix airport tarmac, and the wrongness of Andrew McCabe, Ron Rosenstein, and so many others ever having been in charge of investigations that smacked of conflicts of interest and other malfeasances––all worthy of criminal investigation and, from what I’ve read, indictment! 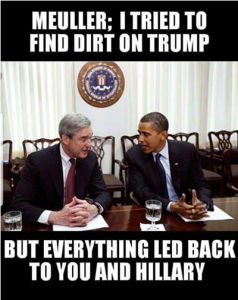 And that is not to omit the destruction of 33,000 e-mails by Ms. Hillary, and the much more egregious and criminal issue of Benghazi!

MEANWHILE, BACK IN REALITY….

President Trump has been rightfully credited with 289 amazing accomplishments,  including:

For President Trump’s deranged enemies, I suggest hiring good attorneys and hoping for decent obituaries in the now-tabloid NY Times.

For the rest of us, get out the popcorn!