Protect The Flock With A Glock

That is the way I described the recent church massacre in Texas.

“Like shooting fish in a barrel” one of my friends quipped.

I wish it was funny…but it is not.

It is time to admit that it is getting more and more dangerous to be a Christian in America today.  In the nearly 20 years in which I have been fighting in the cultural war I have never seen the LEFT so unhinged.  We will live to see the day where the White Anglo Saxon Christian becomes the most hated citizen in this land.

In fact, we already are.  We just have failed to recognize it.  For the most part our pastors and church leaders are oblivious to the god-hating army that is forming on the horizon.  Despite what the LEFT preaches to everyone they are motivated by rage and their 40 year march against everything Christian is coming to a grizzly climax.

I wish I had better news for you, but this won’t be the last group of Christians to be mowed down by a member of the tolerance spewing hate-mongers on the left.  The LEFT, despite their peacenik masquerade, still covet the thrones of society from where they can impose their diabolical agenda.

They don’t take losing well.  They throw a fit when things don’t go their way.  They have graduated from peaceful protests to mob violence.  They have traded in their cardboard signs for physical weaponry.  They have traded peace for violence in their attempt to force their dastardly ideology on God fearing people of faith.

Yes, my friends, the Devil is coming to church.

He arrived with a bang (sorry) last month.  Although we are told in the Scriptures that he “masquerades as an angel of light” he boldly removed his peaceful costume for everyone to see.  The Devil’s kids have thrown off any pretense of peace.  Murder is in their heart and they are determined to take it to a new level.

Meanwhile, the church plays patty cake.  Caught up in the euphoria of love Christians have failed to heed the call of the Savior.  He warned us that while the LEFT cries “Peace Peace”…sudden destruction cometh.  The hoards of hell are being released upon the peace-loving, God-loves-everyone American church.  What will it take to awaken our pastors?

Jesus told us the “greater love hath no man than this, that he would lay down his life for his friends.”  But He never meant for us to lie down and allow them to murder our family and friends.  Love is demonstrated best through protection.  Christians think non-violence is Godly.

Well the Devil is coming to church and it is high time for the MEN in the church to decide if they are going to answer the call to defend their neighbors.  “There is a time to kill” the book of Ecclesiastes tells us.  Am I the only one who thinks it is about time to fight back?

I don’t condone offensive wars.  It is not our call to randomly kill…to go on the offensive and start shooting everyone we disagree with.  But it also is not the time to cower sheepishly in the corner while the wolf ravages the flock.  Are you your brother’s keeper?   Would things be different in Sutherland Springs if a few good ole boys in that congregation had been packing?

Let me cut to the chase.  The LEFT loves death.  They will kill you to get their way.  If you have not come to that realization then you are auditioning for a role as a sitting duck.  I love you enough to shake you out of your comfort zone.

It is time for you to start carrying a gun.  Maybe you don’t care if someone picks YOU off during the singing of “Amazing Grace” but is it possible that your neighbor would like to hang around the earth a little bit longer?  If you loved your neighbor wouldn’t you want to do everything you could to protect him? 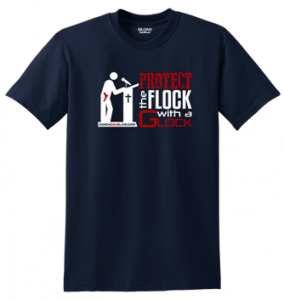 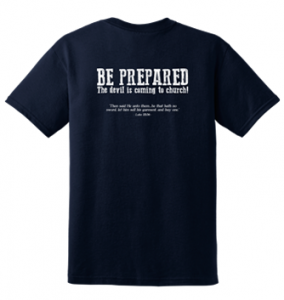 Start carrying a gun in church.  Hide it under your jacket.  Teach your wife to do the same.  Let your pastor know that when some dude comes walking into the church guns a blazing that you are prepared to introduce him to the Lord.  Get a security team organized in your local church.  Stop being as presumptuous as to expect the Lord to protect you when you won’t take steps to protect yourself.

It is time we put the pressure on our pastors and told him to man up.  Tell him to get his conceal carry permit.  Ask him if he is prepared to defend the flock against a sin ravaged Antifa member.

Wear this shirt to church.   Order one for your pastor as a Christmas gift.  Dare him to wear it.  It is time for the world to realize that men who defend their families are welcome back into the church. The church has played sissy long enough.  Let’s make manhood “Christian” again.

You can order the shirts here.  Just make a donation and we’ll send one your way.  The Devil is coming to church.  Protect the flock with a Glock.