The Left in America has been very frisky this month, and a lot less bashful about showing us who they are and what they want to do. We wonder why. 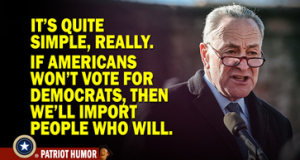 Through their many surrogates—the colleges, the nooze media, Hollywood, wacko judges, and, of course, the Democrat Party—they’ve been uncharacteristically candid about their plans for us. What gives them so much confidence? Is it genuinely delusional, or do they know something that we should know, but don’t?

George Washington University, for one, has held a seminar on “Christian Privilege,” which is sort of like “White Privilege” and has to be abolished. Christians in America—that would be the majority of Americans–have all these “unmerited perks” that must be done away with if we’re ever to create Utopia. GWU is here to lead the jihad.

Many of our looniversities, meanwhile, are participating in the 19th Annual White Privilege Conference, which will feature such illuminating workshops as “Breaking the Chains of Capitalism.” Held this year in Grand Rapids, the wingding “brings thousands [of idiots] together to discuss privilege, primarily though not exclusively, racial privilege”—in addition to laboring to break the chains of capitalism, a la Venezuela and North Korea. Your sons and daughters will receive academic credit for attending these workshops online. Your hard-earned money pays for it.

Our wonderful high schools don’t want the colleges getting all the glory; and at a high school in Nebraska, they’ve done something about that. They’ve put up a poster in a classroom saying “Republicans=Nazis”. Do these schmendricks even know what a Nazi is? Like, it’s short for “National Socialist.” Yes, socialist. No, they don’t know: “Nazi” just means anyone who’s not them, and is therefore really, really bad.

So how un-bashful are they now? For the answer to that question, we turn to the social media.

Jack Dorsey, CEO of Twitter, already in hot water for censoring and “shadow banning” conservatives, has praised an article by two San Francisco dunderheads in a publication called “Medium,” in which the authors call for “a civil war” to put the Republican Party out of business for as long as it takes to wipe out all non-leftid thought.

As incredible as it may seem to anyone but a foaming-at-the-mouth leftid, “California is the future,” prattle the authors, to enthusiastic praise from Dorsey. California is “about 15 years ahead” of the rest of America, but not to worry—the other 50 (or is it 56?) states are bound to catch up—and in a mere 15 years, your state, too, will host impoverished tent cities swarming with illegal aliens. Comin’ your way!

Really, now—this is what they want? For all of us?

I make it a rule always to believe bad people when they say they intend to do bad things. If they don’t do them, it won’t be because they didn’t try.

These people on the Left are coming right out into the open, telling us what they mean to do to our country. They declare that this year’s national elections will metastasize into a Great Blue Wave that will give them power to do all those things they want to do—erase our nation’s borders, trash our economy, wipe out our civil liberties—federal prosecution for Climate Change Denial, anyone?—and complete that “fundamental transformation” which President *Batteries Not Included started and which Hillary Clinton, in between drinking bouts, was supposed to finish.

Well, they mean to finish it! Having tantrummed their way into our hearts since Election Night of 2016, they are convinced that we will flock to the polls to give them the keys to the kingdom. Why we would even think of doing that, who knows?

Either they think that we’ve gone mad, or they’ve got something more than usually wicked up their sleeves.

I have discussed these and other topics throughout the week on my blog, http://leeduigon.com/ . Why not stop in and visit? A single click will take you there.