In April, NewsWithViews.com published a news story about Islamic indoctrination in the San Diego, California, schools. Now we have discovered the indoctrination is spreading to school districts such as Maryland, Massachusetts and New Jersey. 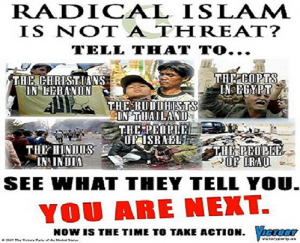 Parents throughout the U.S. have been objecting to a school program called “Access Islam.” The federally-funded program is directed at grade-school children is also featured on various websites. States such as Maryland and Massachusetts are now joined by New Jersey, where Morris County’s Chatham Township has jumped into the legal fray.

The Thomas More Law Center (TMLC), a non-profit, public interest law firm based in Ann Arbor, Michigan, announced that it is representing two Chatham Township (Morris County), New Jersey mothers who are being lambasted by members of their own community.

“Their crime: appearing on Fox TV’s Tucker Carlson Show to voice concerns about the Islamic indoctrination of Chatham Middle School seventh graders,” according to a TMLC press statement.

While seventh graders in this public school are taught: “May God help us all find the true faith, Islam,” they are prevented from even mentioning the name Jesus Christ even during the Christmas season.

Richard Thompson, Chief Counsel of the Thomas More Law Center, commented: “The promotion of Islam is worse than what the mothers presented to [when they appeared on Fox News Channel’s] Tucker Carlson show. After viewing one of the videos which the seventh graders were directed to watch, I can’t imagine any objective person saying this is not Islamic indoctrination. Clueless school administrators across our nation are allowing this type of indoctrination to take place and it’s up to vigilant parents to stop it. Libby and Nancy should have been praised, not pilloried.”

Libby Hilsenrath and Nancy Gayer, with sons in different classes in the seventh grade, detailed their concerns in person to the Chatham Board of Education at their public meeting. Superintendent Michael LaSusa indicated that any change to the curriculum was unlikely, and the next day also refused their request to meet privately with him to discuss their concerns, according to the Clarion Project.

According to their attorney Richard Thompson, Libby Hilsenrath and Nancy Gayer were subjected to personal attacks throughout their campaign to stop Islamic indoctrination at the Chatham Middle School. They were defamed as “bigots” and “Islamophobes”, “hateful”, “ignorant”, “xenophobes”, “intolerant”, “racist”, “closed minded”, “sad and ignorant” in social media, and the list goes on. The attacks significantly intensified after their appearance on the Tucker Carlson Show.

Commenting on the community’s reaction, Nancy Gayer stated: “It’s just not fair that within this unit of study the Chatham school district taught one religion to the exclusion of all others, and for the community to be so unkind and unwelcoming towards us, just for having raised legitimate questions as concerned parents.”

Libby Hilsenrath added, “One of my fundamental obligations as a parent is to guide the religious and secular education of my children. That’s why I will continue the fight against the Islamic indoctrination now taking place at Chatham, regardless of the personal attacks.”

Nancy Gayer contrasted the World Cultures and Geography lessons on Islam to her son’s previous experience in fourth grade when he was precluded from including a short quote from the Bible, “he who lends to the poor, lends to the Lord.” (Prov 19:17)

The quote was a part of his video presentation related to gathering warm clothes for underprivileged children. Nancy said that her son’s teacher informed him that the brief Biblical quote “belongs in Sunday school, not in the classroom.” Obviously, based upon the World Cultures and Geography lessons being taught to children within the same school district, this abridgment of religious speech does not apply to Islam.

As part of the school’s “World History” curriculum, high school students in Maryland were taught extensively about Islam — without any context of current events — and required to list the benefits of the religion.

In one homework assignment obtained by a news outlet, the question was asked: “How did Muslim conquerors treat those they conquered?” The correct answer was, “With tolerance, kindness and respect.”

His wife, Melissa, noted, “We cannot discuss our Ten Commandments in school but they can discuss Islam’s Five Pillars?”

The couple asked that their daughter be excused from this part of the curriculum and given an alternative assignment, a request which was refused. The father was told that the assignment must be done or his daughter would receive a zero. Students are allowed to opt out of other modules in the high school, for example, sex education.

Charges that teaching materials about the Middles East are biased and funded by Saudi, Palestinian, and other Arab states were levied against Newton high schools.

One of the books the schools recommend as reading material included extremist writings by Muslim Brotherhood leaders Sayyid Qutb and Yusuf Qaradawi, who is known for his sermons calling for the murder of Jews and homosexuals.

Public pressure previously forced the high schools to discontinue using the Saudi-funded Arab World Studies Notebook, which makes spurious charges against Israel. The book has been rejected by a number of other school districts as well.

A number of anti-Semitic incidents were reported in Newton high schools during use of the book. School officials, in violation of mandatory reporting procedures, failed to inform parents and police of the escalating incidents.