The Gray Lady has become bald since, by a hair, the New York Times has scored it’s greatest triumph, so it thinks.  By publishing an elaborate thought out piece proclaiming that Trumps’ own cabinet hate him and wants to force him out, stimulates public suspicion about him. (Why even his own cabinet sees what he is!! my my)

Yep, that’s the idea which is a typical Communist strategy to destroy those they wish to destroy: using suspicion, confusion and of course, downright lies. Again, typical communist strategy; This is what’s in their lunch boxes.

HOWEVER, this columnist is pushing for a defamation lawsuit to be filed against the writer of the piece, New York Times Op-Ed editor, JAMES DAO.  And the case is there.

The writer of a news piece is identified with the story by his or her name being listed under the title. One cannot  publish a story without the writers name connected with it, even with the name ‘anonymous’ as the ‘source.’ This does not make if legit. 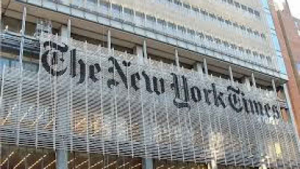 Didn’t anyone from the New York Times go to journalism school? A reporter cannot publish defaming-libel claims on someone and then state that the writer is anonymous, or in other words, secret, as a way to attribute dirt assault on someone they do not like.  However, that N.Y Times writer is not anonymous.

The person who writes the story is RESPONSIBLE for the story. And in this case, his employer, The New York Times, was the instrument of making these claims to the world, so they are responsible as well.

So who is the actual writer? Everyone in the president’s cabinet denies writing and having that piece published. We know who the writer is, James Dao, since his own name is on the story.

It was not anyone in President Donald Trump’s cabinet who was the traitor to publish that story as an ‘insider’ who wants Trump to be taken out of office as every Communist wishes.

The New York Times’ manufactured, created, wrote that story and published it in what was at one time America’s most respected newspaper.  Pity.

This is now a legal problem. A lawsuit is proper under these circumstances. Subpoena James Dao and The New York Times and charge them with slander. The intent was there by the very publishing of this false story in order to undermine our president.

The reason for such prattle is, according to the law, a reference to one who is engaged in trade or business. It is defamatory and actionable per se’. because a business man must have credit to succeed in his calling.

This would certainly apply to the President of The United States. Plus threatening the president is a serious crime which can bring stern punishment.

The law states: Defamatory statements actionable per se’. There are three classes of defamatory statements which are actionable per se’ in themselves; that is, without proof of special damages. These are: words imputing crime, words disparaging a person in his trade (running the country), business, OFFICE, or profession, and words imputing a loathsome disease.  Special damage is not required to be shown, probably because these are among the most serious charges that can be made; the law allows the plaintiff to sue at once without making sure that he can prove damage, and thus gives him better legal protection. (This is straight out of the law books.)

Read that carefully for this is the law. And this shows that James Dao and the New York Times itself can be sued and rightfully so. Let us insist that this happens.

We urge ALL NEWS SITES and readers to get on this and demand that these charges be filed without delay.