Sen. John McCain said he did “what any citizen would do” in turning over to the FBI a so- called dirty dossier, that allegedly contained unconfirmed secrets about president-elect Donald Trump, over to the FBI. The Arizona Senior Senator has gained a reputation as a “reasonable conservative” but his critics say he is “neither reasonable nor is he a conservative.”

“If you look up the political term RINO in a dictionary it should carry a picture of McCain with the definition ‘Republican In Name Only,'” said police adviser for the National Law 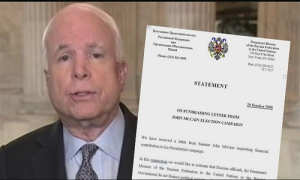 A former intelligence officer told NewswithViews.com that the left-leaning British newspaper, The Guardian, described how the dossier came to be and how McCain got his hands on the super-secret documents.

“I first heard about this mysterious dossier when I was checking out an Inside the Beltway private detective and security firm. The firm allegedly tapped Trump‘s campaign staff and his allies hoping to find negative ammunition against the true Republican Maverick, Donald Trump,” said former military intelligence operative and New York police detective Michael Snopes.

“I know… I know… Senator John McCain is the guy the Democrats love to use to slam the GOP because most of the time he has cooperated with the Democrats, especially now,” said Iris Aquino, a former police official and now a director of security for a major corporation. 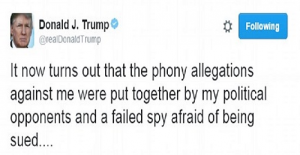 Shortly after the election — that left Donald Trump the winner and Hillary Clinton the loser — John McCain attended a Canadian conference and spoke with a ‘former senior western diplomat’ who knew of the dossier’s existence, claims the United Kingdom’s Daily Mail.

Sir Andrew Wood described to reporters his dealings with McCain: “I would like to stress that I did not pass on any dossier to Senator McCain or anyone else and I did not see a dossier at the time.” However, it’s what Wood did not say that was interesting: He didn’t deny telling McCain about the dirty dossier.

On Tuesday, the Wall Street Journal exposed the ex-spy who actually obtained the documents as being British subject, Christopher Steele.

The unnamed contractor was later identified by the Wall Street Journal  as being Christopher Steele. He and another ex-British diplomat, Christopher Burrows, run their own company, Orbis Business Intelligence.