A group of angry lawyers and investigators for a top public-interest law firm voiced their outrage on Thursday when the non-profit group announced that the U.S. Senate Select Committee on Ethics is refusing to take any action against Sen. Cory Booker (D-NJ). The man who called himself “Spartacus” admitted to “willfully violating Senate rules by releasing confidential records regarding then-Supreme Court nominee Brett Kavanaugh’s time as a White House counsel.”

A number of observers are comparing Booker to another Democrat with a history leaking classified documents to the leftist news media – Sen. Patrick “Leaky” Leahy,

who was kicked off the Senate Intelligence Committee for leaking President Ronald Reagan’s secret military strategy during the Cold War.

The documents were marked “Committee confidential,” meaning they were not for public distribution. Unfortunately, Sen. Booker was given membership on some of the most sensitive and important Senate committees including the Judiciary and the Foreign Relations committees. Before winning his Senate seat, Booker was the mayor of Newark, New Jersey, one of the most impoverished and crime-ridden cities in the United States. The city is still considered a mess according to both black and white police officers. 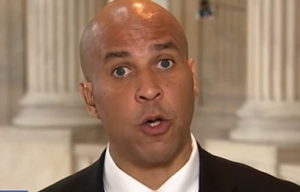 In his flamboyant diatribe against one of the nation’s leading scholars, Booker is said to have “played to the cheap seats” and foolishly compared himself to the legendary gladiator who built an army that threatened the Roman Empire.

“I laughed my head off listening to Sen. Booker with his usual ‘eyes-bulging’ facial expression comparing himself to a great soldier and commander. This is one of the stars of the Democratic Party who is being touted as a presidential candidate? I think the Democrats scraped the bottom of the barrel heading to Hades for their next radical, empty-suit,” said Martin “Marty Mayhem” Jackson, a retired federal agent and sheriff who now teaches martial arts. “Saints preserve us from such mediocre candidates being pushed by the fake news people,” he added.

Judicial Watch’s September 2018 complaint to the chairman and co-chairman of the U.S. Senate Select Committee on Ethics called for an investigation after Sen. Booker admitted to violating Senate rules about leaking confidential material. Ethics Committee Chief Counsel and Staff Director Deborah Sue Mayer responded with some sad but not unexpected news: 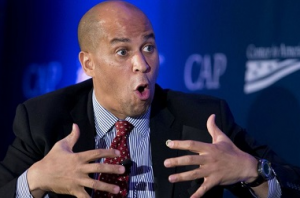 “The Select Committee on Ethics (the Committee) has reviewed the complaint you filed against Senator Cory A. Booker, dated September 12, 2018. The Committee carefully evaluated the allegations in the complaint and, based on all the information before it, determined that no further action is appropriate. Thank you for your correspondence with the Committee.”

“And the classification of many documents as “Committee confidential” is a sham… I willfully violate these sham rules. I fully accept any consequences that might arise from my actions including expulsion.”

By violating the rules in releasing Committee confidential records, Sen. Booker appeared to have violated provisions 5 and/or 6 of Rule 29 of the Standing Rules of the Senate (Rev. Jan. 24, 2013), which stipulate that he should be subject to expulsion from the Senate:

“Whenever, by the request of the Senate or any committee thereof, any documents or papers shall be communicated to the Senate by the President or the head of any department relating to any matter pending in the Senate, the proceedings in regard to which are secret or confidential under the rules, said documents and papers shall be considered as confidential, and shall not be disclosed without leave of the Senate.” (See pp. 48-49)

“While the FBI SWAT Team sent more than 25 agents to raid the home of political consultant Roger Stone and his wife, no one in the U.S. Senate will take any real action against a Senator who shows a propensity for leaking classified information and has been caught in numerous lies,” said former police internal affairs investigator L.B. Quazara. “It’s amazing how the feds have all but destroyed the lives of cops through their penny-ante investigations of good cops in the name of fake justice,” Quazara added.

According to the president of Judicial Watch Tom Fitton, “[It’s] an absolute disgrace that the Senate Ethics Committee is giving Senator Booker a pass for willfully violating Senate rules by leaking confidential information [in order to smear] Justice Kavanaugh.”

“The Senate continues the abuse of Kavanaugh and his family by refusing to act against a Senator who, pretending to be Spartacus, violated the rule of law and our Constitution in trying to destroy him,” Fitton added.