Merrick Garland has a long record, and, among other things, it leads to the conclusion that he would vote to reverse one of Justice Scalia’s most important opinions, D.C. vs. Heller, which affirmed that the Second Amendment confers an individual right to keep and bear arms. 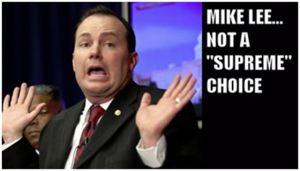 Or is the Senator a moderate leftist himself?  Lee is tweeting Trump that he should nominate Merrick Garland for Director of the FBI in order to quell the hatred from the left.  Really Mikey?  There is nothing that would stop the globalist’s hatred of political outsider, Donald J. Trump!

And why the hell should we cave to them time and time again?  Has caving to the left produced anything worthwhile in the past?  No, of course it hasn’t, and it never will.  Tell me one time Senator when the left has caved to the right!  They are fighting tooth and nail to derail and destroy this presidency, something you also tried to do.  Giving them anything is pure asinine stupidity showing weakness and lack of judgment.  They need to be destroyed, not encouraged.

Senator Mike Lee is no Conservative

Before we look at Judge Garland’s background, let’s take a closer look at Mike Lee.

In early October, 2016, Senator Mike Lee said to Trump, “I respectfully ask you, with all due respect, to step aside. Step down, allow someone else to carry the banner of these principles… rather than weighing down the American people.”

Does anyone who supported our new President believe he should listen to Senator Lee?  And just who did you want to carry the banner Senator?  Your globalist buddy, Dominionist Ted Cruz?

In September of 2016, Trump put Lee on a list of possible Supreme Court nominees; Lee rebuffed him, saying he preferred to stay in the Senate.  Good Senator, we don’t want you on the high court.

The Deseret News said Mike Lee has lost credibility to speak on financial issues…because he did a short-sell on his home that us regular folks can’t do because we don’t have pull with the banks.

We also remember what you did at the Republican Convention Senator!  You and your wife, Sharon Lee were rules committee members at the RNC, both of whom supported Ted Cruz and hoped to change the rules to derail Trump. That did not happen.

Ken Cuccinelli of the Senate Conservatives Fund and Mike Lee both sold out grassroots conservatives so they could make a spectacle on the floor of the Republican National Convention as part of the last dying breaths of the “NeverTrump” collective.

As a so-called pro-life senator, you didn’t care about Flint, Michigan babies drinking water laced with lead, did you?   Lee fought to prevent any federal funding from going to help the city of Flint, Michigan replace the old lead pipes that are causing their water to be contaminated.

Back in September of 2016, Lee was one of only three Senators to oppose a $10 billion water bill that included $100 million in aid to Flint — specifically because of that part of the bill. In March, he blocked another $220 million emergency aid package to Flint. He supported a Republican stopgap budget that included aid to flood victims in four states, but not the aid to Flint.  Link

We remember that you told trade experts that you were looking for ways to curtail the president’s wide-ranging powers to impose tariffs…you’d rather foreign governments have manufacturing rather than American corporations, which would offer American jobs.

In 2013, Lee introduced bills that would eliminate the per country percentage caps on all H1B visa holders. The second bill would extend the amount of time certain agricultural workers are allowed to stay and work.  Sorry Senator, but this doesn’t help American workers or high school and college kids looking for part-time work.

Lee also supported legislation that would bring more Muslims into America. In January of 2015, a handful of Senators quietly introduced new legislation in Congress that would allow for virtually unlimited Muslim immigration into the United States – lifting caps entirely on several categories of visas favored by immigrants from Muslim countries. The Mark Zuckerberg-backed legislation, S.153, was called the Immigration Innovation Act (or I-Squared). [Link] 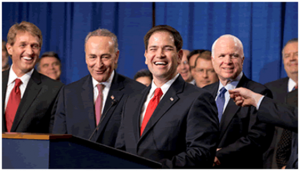 The I-Squared bill is significant for a second reason. One of the Senators who introduced the bill, former Presidential candidate, Marco Rubio, won reelection to the Florida Senate. Remember the infamous Gang of Eight?

According to Politico, Mike Lee was aligned with liberal Democratic Sens. Patrick Leahy of Vermont and Dick Durbin of Illinois to ease mandatory minimums for certain crimes, and is uncomfortable with such binding punishments for immigration offenses. He even threatened to oppose sanctuary cities legislation that includes mandatory minimums.

In Michelle Malkin’s book, Sold Out, she covered the I-Squared Act, S.153. She stated, “If you are an American worker, that bill is more appropriately called the ‘I’m Screwed Act.’” This rotten legislation had 14 sponsors back in 2015, and Senator Mike Lee of Utah was one of them.

The Senator isn’t nearly as conservative as many believe.  In fact, he’s very much like establishment globalist, John McCain.

Garland is the chief judge of the D.C. Circuit Court of Appeals who was nominated by Obama for the Supreme Court seat vacated when Judge Antonin Scalia died.  But Garland never received a hearing or a vote, his nomination was stalled by Senate Republicans who argued a justice should be nominated by whoever won the upcoming 2016 presidential election.  Thank God, the Republicans kept him out, for once they stood their ground against the left, a miracle in itself.

Not only is Senator Lee pushing Garland, but the judge was also floated by the so-called conservative Daily Caller, which speculated Garland’s confirmation would clear a coveted seat on the influential D.C. Court of Appeals, allowing Trump to appoint a right-leaning judge.  Definitely not an argument that holds water in my book.

According to a ranking of Supreme Court and appeals court judges, Garland was rated as ideologically similar to Elena Kagan and Sonia Sotomayor, President Obama’s previous picks for the court, and this is who Senator Lee wants for FBI Director? 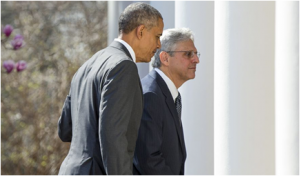 Garland and the Second Amendment

If you want a judge who hates the second amendment, Garland is the man. Mike Lee framed Garland’s “long history of prosecutorial experience” as “an exciting pick” to head the FBI.  Really?  Obama’s choice for the high court is an “exciting pick?”

Garland’s extensive record leads to the conclusion that he would vote to reverse one of Justice Scalia’s most important opinions, D.C. vs. Heller, which affirmed that the Second Amendment confers an individual right to keep and bear arms, and there is history to prove it.

In 2007, Judge Garland voted to undo a D.C. Circuit court decision striking down one of the most restrictive gun laws in the nation.  Most gun owners remember this decision.

The socialist District of Columbia government had passed a ban on individual handgun possession, which even prohibited having a firearm in your own home for self-defense. A three-judge panel struck down the ban, but Garland wanted to reconsider that ruling. He voted with another liberal on the court, Judge David Tatel, who by the way, sits on the board of the liberty destroying Carnegie Foundation.

Earlier cases had signaled their strong hostility to gun owner rights.  Fortunately, they didn’t win the vote, and the Supremes had a chance to hear and rule on the case, for the people and the Constitution.

And in an earlier case Garland voted with Tatel to uphold an unlawful Clinton-era regulation that created an illegal gun registry. Congress prohibited federal gun registration mandates back in 1968, but the Clinton Administration had been “retaining for six months the records of lawful gun buyers from the National Instant Check System.”

By storing these records, the feds created a registry that violated the 1968 law. It even violated the 1994 law that had created the National Instant Criminal Background Check System (NICS) in the first place. Congress directly forbade the government from retaining background check records for law abiding citizens.

Garland, however, thought all of these regulations were legal, which doesn’t say much for his judicial abilities! Obviously, he has a very liberal view of our second amendment rights and his ability to trample the Constitution, since he apparently wanted to undo a key court victory protecting them. And he had no problem upholding illegal executive actions that violate our rights as gun owners.

He’s no moderate, that’s for sure.

Much of the above info is taken from Carrie Severino’s excellent article in National Review.

As for the abortion issue, it rarely came up in the D.C. Circuit Court.  Their rulings were mostly on regulations, so finding where he stands is unlikely as his stance on social issues is very murky.  Americans United for Life believe he’s pro-abortion.  Their proof however, is weak, but I’d bet AUL is right.

Apparently, Garland once spoke at a gathering celebrating the 2005 release of a book on the late Justice Harry Blackmun by veteran New York Times Supreme Court reporter Linda Greenhouse. After Blackmun’s death, Greenhouse had drawn heavily on the release of a huge treasure trove of Blackmun’s papers—papers Garland called “a great gift to the country.” Blackmun was the author of Roe v. Wade.

According to a ranking of Supreme Court and appeals court judges, Garland is ideologically similar to Elena Kagan and Sonia Sotomayor, President Obama’s previous picks for the court.  Needless to say, I wouldn’t want him on the high court, and neither would I want him as Director of the FBI.

Roger Stone’s choice for FBI Director is Jeanine Pirro.  Sounds good to me!

P.S.  In today’s world everything costs, but rarely do we stop to count the cost of liberty and freedom.  Our mainstream media is fully owned and controlled, and truth is a rare commodity.  NewsWithViews works diligently to bring you up-to-date information on what is really happening in our country, and like everything else, costs have risen.  Won’t you please help us keep the truth coming into your homes every morning…no matter the size of the donation, every little bit helps.  You can donate here, and keep freedom alive.