But the framers were not visionaries. They knew that rules of government, however brilliantly calculated to cope with the imperfect nature of man, however carefully designed to avoid the pitfalls of power, would be no match for men who were determined to disregard them.  Barry M. Goldwater, Conscience of a Conservative

The race between Roy Moore and Doug Jones was a close one, and Moore still has not conceded.  The current law in Alabama requires a mandatory recount when there is a half of a percent margin, but Moore remains 1.5 percent behind his opponent, Doug Jones, who was declared the winner with 99 percent in.  However, the military votes had yet to be counted. Moore is about 22,000 votes short, but it is uncertain whether the uncounted votes will tally up to that number. 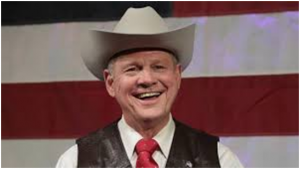 Drudge is reporting that Luther Strange would have won, and he’s probably right.  An establishment insider like Strange is far preferable to the globalist politicos than someone like Moore.  However, the only conservative candidate in the primary for this race for Sessions’ seat was Mo Brooks, and the electorate of Alabama made the mistake of not choosing him.

Like the presidential races of the past where Republican candidates such as Dole, McCain, and Romney are less than desirable choices, the same went for Moore.  Unfortunately, the American people as a whole may lose because of Alabama’s choice of Moore as the Republican nominee.  We needed Moore, if nothing else to vote against the baby murderers, to help our president’s agenda, and to keep the Senate at a 52 to 48 majority.

The Cost of Hubris

Moore has always been an abrasive oddball, and when the accusations of sexual misconduct with teenage girls hit the news, Moore’s hubris got the best of him.  Instead of simply stating that the accusations were false and that he’d sue, he agreed to an interview with Sean Hannity on his radio program.

When Sean asked Moore if he remembered dating young teens, Moore answered, “Not generally, no.”  Really?  What did that mean?

Moore should have had the counsel of a good attorney who told him to keep his mouth shut, to deny the allegations and to keep campaigning, but he didn’t.

As I explained in a previous article, Moore’s reputation for arrogance goes back to his law school days.   Guy Martin, Jr., a minister and former law professor who taught constitutional law to Roy Moore, had an op-ed in an Alabama newspaper speaking out against Moore’s candidacy. What he had to say about Moore was not the least bit surprising, both professors and fellow students found him illogically pigheaded and obdurate.

Mitch McConnell, Paul Ryan and a host of other establishment globalist Republicans failed to support Moore and called for him to step down.  Senator Shelby (R-AL) actually told people to write in a candidate of their choice rather than voting for Moore, thus dividing the vote so Doug Jones would win.

It’s like Rush Limbaugh says all the time, the Republicans have the perfect opportunity to destroy the left, but they sit on their hands and refuse to go for the throat of the enemy and destroy them.  By now most knowledgeable Americans know why … the left and right have been in bed together with the same agenda for decades.

I’ve stated many times that Carroll Quigley’s 1966 book Tragedy and Hope, A History of the World in our Time told the globalist plans. Tragedy being that so many people have to die, and Hope being the New World Order. He was the official historian for the Council on Foreign Relations (CFR) and was privileged to study the elites’ plans for the world for nearly two years. Quigley taught at the School of Foreign Service at Georgetown University from 1941 to 1976, and was Bill Clinton’s mentor. On page 1247 of his massive tome, he wrote this:

The chief problem of American political life for a long time has been how to make the two Congressional parties more national and international. The argument that the two parties should represent opposed ideals and policies, one perhaps, of the Right and the other of the Left, is a foolish idea acceptable only to doctrinaire and academic thinkers. Instead the two parties should be almost identical, so that the American people can “throw the rascals out” at any election without leading to any profound or extensive shifts in policy. The policies that are vital and necessary for America are no longer subjects of significant disagreement, but are disputable only in details of procedure, priority, or method…Then it should be possible to replace it, every four years if necessary, by the other party, which will be none of these things but will still pursue, with new vigor, approximately the same basic policies.

We needed Roy Moore, but he helped to destroy his own candidacy, the left bankrolled Democrat Doug Jones, and the Republicans never came to his defense until it was too late. Now the American public is stuck with a Schumer/Pelosi Democrat who believes in aborting human babies up to the very minute of their birth.

We’re now stuck with Doug Jones until 2020 when Jeff Sessions’ term is up.  One would hope that in two years, Alabama would choose conservative Mo Brooks as their candidate.