What’s going on in America today stands as a hallmark of sheer, pure, utter and complete stupidity.

We’re allowing less than one percent of the country to dictate their criminal way of life on the rest of us.  Take for instance, we’re prosecuting 300 rioters on the U.S. Capitol on January 6th, 2021 for walking into the Capitol with no guns, no firepower, no nothing.  Then, certain politicians and talking heads called it an “insurrection.”

Definition of an insurrection by Webster:  INSURRECTION implies an armed uprising that quickly fails or succeeds.

No one was armed on January 6, 2021.  But when you look back at 2020 with the BLM along with Antifa anarchy, those anarchists set fires to everything, killed people, and caused $2 billion in destruction of our cities. Not one of them was brought to trial.  What color of stupid would you call that?

Last year with Joe Biden, over 2,000,000 illegal alien migrants invaded our borders against our laws and against everything we stand for in the U.S. Constitution.  Where are they now?  Biden bussed, flew and ferried them to cities around America where they live on our welfare dollars that’s costing us BILLIONS.  And will continue costing us billions of our tax dollars.  What price this form of stupid by a stupid U.S. president?

Last week, I spent a lot of time in California in Los Angeles and San Francisco.  I witnessed 66,000 homeless in LA and another 35,000 living in tents and sleeping on cardboard boxes in San Francisco.  Nothing is being done to solve that massive American problem. NOTHING!   In fact, it’s getting worse by the day.  What color of stupid would you pull out of your Crayola box to paint that situation?

We’re paying $5.00 a gallon for gas all over the country in 2022 because of choices in 2021 to shut down the Keystone Pipeline that destroyed our energy independence.  In California on the Big Sur, I paid $8.55 a gallon. I even took a picture of the gas pump.  What form of stupidity would you call that when our leaders are strangling us at the pump? 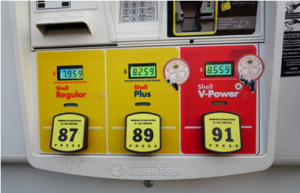 (Where I filled up on Big Sur, California two weeks ago.) Photography
By Frosty Wooldridge

Last week, two black guys smashed a 60-year-old man in the head, who was walking down the street, minding his own business in NYC, and killed him as his skull fracture on the pavement. They robbed him and casually walked away.  Why? Because DA Bragg, also black, wants to be a kinder and gentler person with the mobs that rule the streets.  What color of stupid would you call that?  How about “African tribal law.”  Perhaps there’s only one color you can assign it.

In the past month, Biden has given $53 billion to Ukraine, a country 10,000 miles away from us. But we’re $31 trillion in national debt as we pay billions in interest rates weekly.  We’re so far in the red that there’s only one color of stupidity that you can call his actions: Bloody, stupid, asinine, ridiculous and ugly RED!

We suffer dozens of gun killings in Chicago, NYC, Detroit, St. Louis, LA and more big cities every week.  Sometimes, the death rates reach over 100 per weekend.  What do the DA’s of those cities do?  They give  “no bail” allowances to hardened criminals who get back out onto the street within hours.  You think Uvalde or Sandy Hook were terrible, but in fact, more people are killed with fists, ball bats, crowbars and knives than guns.  Why don’t we get back to the basics like citizenship, peaceful communication and civility to settle our differences?  What color of stupidity would you choose to call the fact that we haven’t, and we won’t teach personal accountability and personal responsibility?  Why haven’t we put armed security professionals at the doors of all our schools?  What color of stupid is that?

What does it all mean?  It means that our multicultural society fractures more and more by the day.  We’ve got too many cultures that are incompatible with Western Thought and Laws.  We’ve got too many angry inner-city criminals with no other way to express themselves.  We’ve got a “too complicated” society and “too fast” society for anyone to maintain a mental, physical and spiritual balance. We revere TOO much violence on TV, Video Games, and the movies to even expect that anyone would peacefully settle a dispute.

Are there any solutions to the stupidities across the nation? Answer: of course!  We need swift, complete and effective policing in every city. We need to stand by our police.  Then, we need swift, severe and total jail time for all those criminals.  No easy bail, no pat on the back, and effective jail-time to give those criminals 20 years to think about their deeds. I’m happy to pay for their three squares and a cot as long as they’re not out there robbing and killing my friends and family.

Once we reestablish the rule of law, and respect for the law by enforcing our laws, we have a chance to change to a much kinder, simpler and more peaceful society in the coming years.  What color of stupid do you think we’ll finally end up?