States Are No Longer States Under The Constitution

“The powers delegated by the proposed Constitution to the federal government, are few and defined. Those which are to remain in the State governments are numerous and indefinite.  The powers reserved to the several States will extend to all the objects which, in the ordinary course of affairs, concern the lives, liberties, and properties of the people, and the internal order, improvement, and prosperity of the State.” —James Madison, Federalist Paper No. 45

Oh what a difference 231 years can make (1787 to 2018).  The U. S. Constitution was finally ratified in 1787.  Ever since then the federal government, (FEDS) in its Hell bent drive to fairness, equity, “regulating commerce“, “promoting the general welfare” and increasing federal power, has exceeded its 17 enumerated powers contained in Article 1, Section 8 of the U. S. Constitution as to render the Constitution almost meaningless.  Federal powers are not now limited they are virtually unlimited.  The states were supposed to be the fourth check on federal power, after the executive, legislative and judicial branches of the federal government.  The 9th and 10th Amendments are but mirages of their original intent. 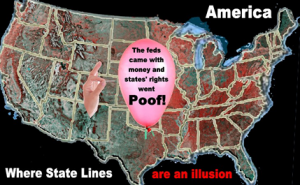 have willingly abdicated their unalienable rights for money that was theirs in the first place.  Every admonition by the Founding Fathers has been realized and several generations of once-free Americans have no clue as to the depths of the profound loss of their freedom and the irretrievable dilution of state power.  State lines and state autonomy under the 9th and 10th Amendments are an illusion.  We are the nation of federal America, not the United States of America.

The enumeration in the Constitution, of certain rights, shall not be construed to deny or disparage others retained by the people.

The [limited] powers not delegated to the United States by the Constitution, nor prohibited by it to the States, are reserved to the States respectively, or to the people.

Just to see how powerful was the financial grip on the individual states with federal contributions, we examined the states of California, New York and North Dakota to determine how much the federal government was “kicking back” to the three states for Welfare, Education and Transportation, as compared to the total state budget for those three items.  The FEDS kicked back 36% to California ($75 Billion), 42% to New York ($44 Billion) and 29% ($1.4 Billion) to North Dakota.  That is a lot of financial clout and leverage to get the states to do the FEDS bidding. (To see the FEDS contribution to the rest of the states, click in the following link.)

It gets worse.  The FEDS, along with their partners in crime, the media, academia, the socialists and the environmentalists, convince the states that if they don’t comply with federal socialist and environmental mandates and agendas, their own money will be withheld from them.  Some might call that blackmail, extortion, or even grand theft …. or all three.

Many of America’s states have turned blue and are run by Democrat Socialists.  The blue states are mostly dominated by big cities.  Big cities, by their very nature, become dependent on government and are easily trapped in blatant, in-your-face socialism.  The blue state governors and legislatures are willing partners in the federal mandates and heavily tax the state citizens to pay for them without any cost benefit analysis, valid science, or any objection or negotiations under the power of the 10th Amendment.

All three Western states, Washington, Oregon and California, have formed a compact to fight alleged man-caused global warming by taxing carbon dioxide emissions from industry, even though their efforts will have no appreciable effect on the overall planet-wide reduction of carbon dioxide and even though the whole subject and science of man-caused global warming is largely unsettled no matter what you hear from academia or the news media.  (See “Climate“)

California has turned so blue and so overrun with illegal aliens and the homeless, that it might just as well be its own country whose native language is Spanish.  As we wrote earlier, California gets $75 Billion kicked back to them to support those homeless and illegal aliens. 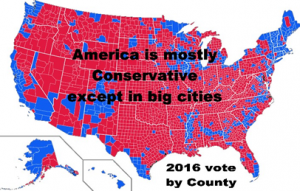 But America is not all blue.  If you look at a county map of America, the majority of the counties are red.

Nevertheless, little by little, the people’s freedoms have been washed away by rivers of federal money, money that the FEDS steal from the people in the form of taxes.  The FEDS then bribe the people and the states with their own money to force them to comply with federal mandates.  Their freedoms have been hijacked for piles of cash and the shaky promise of security.  The people and the states, to their discredit, just look the other way, or are complicit in the fraud.

As we have said many times before:

America is a unique country, more unique than any other nation since civilization began.  Its people are unique because generations have benefited from the concept of individual freedom and unalienable rights.  Those benefits of freedom have created the most powerful, the wealthiest and the most generous nation on Earth.  But all that can be taken away in a heartbeat if individual freedom and unalienable rights are not defended by the masses.  If we let the 10th Amendment of the U. S. Constitution, which codifies the rights of the people and the states to stand in the way of rising federal power, America’s Constitutional Republic will die a tortured, wrenching, violent death.

But then, who is listening?  Most Americans are looking the other way, just like the German people did ….. twice in the Twentieth Century.  From their folly and apathy close to 100,000,000 soldiers and civilians died in two world wars in a single Century.  If Americans look the other way again, history will be repeated in what could become a biblical prophecy ….. Armageddon.

If American freedom, power and courage die, the world will probably descend into never-ending violent chaos and anarchy and perhaps the extinction of the civilized human race as we know it.  China and Russia can’t wait to fill the void we will leave behind and they care not one whit about individual freedom or unalienable rights.  America is the glue and the force that holds the future of world peace in its hands on the ever-fragile foundation of liberty.  If we let that foundation crumble, we do so at our own and the world’s peril.