Stop the #1 Method of Election Fraud

A very dangerous company in East Lansing Michigan that does not appear on the above list (and there could be others), is also deeply involved in both election software and even recruiting, training and managing more than a million poll workers across the country.

The U.S. Election Assistance Commission (EAC) was established by the Help America Vote Act of 2002 (HAVA). The EAC is an independent, bipartisan commission charged with developing guidance to meet HAVA requirements, adopting voluntary voting system guidelines, and serving as a national clearinghouse of information on election administration. The EAC also accredits testing laboratories and certifies voting systems, as well as audits the use of HAVA funds. Other responsibilities include maintaining the national mail voter registration form developed in accordance with the National Voter Registration Act of 1993. HAVA established the Standards Board and the Board of Advisors to advise the EAC. The law also established the Technical Guidelines Development Committee to assist the EAC in the development of voluntary voting system guidelines. The four EAC commissioners are appointed by the president and confirmed by the U.S. Senate. The EAC is required to submit an annual report to Congress as well as testify periodically about HAVA progress and related issues. The commission also holds public meetings and hearings to inform the public about its progress and activities. 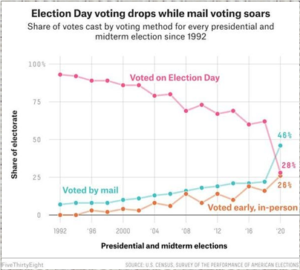 Throughout history, here and abroad, the #1 method of election fraud has been and remains “paper balloting.” The graph below demonstrates what has really happened to elections in the USA over the past thirty years, allowing massive paper ballot fraud to take place, resulting in a number of “stolen” elections since.

As shown in the graph above, a short thirty years ago in 1992, almost 100% of American voters voted in person on election day, during the legal time allowed. The 2000 presidential election was almost stolen by Al Gore in Florida, as the democrat party tried to block the counting of overseas military ballots and spent weeks knocking “hanging chads” out of paper ballots to overcome the Bush victory in Florida on election day.

By 2016 and 2018, approximately 20% of Americans were voting remotely via paper mail-in ballots. But in 2020, remote paper ballot voting skyrocketed to 46% of all American ballots counted. Meanwhile, only 28% of American voters voted in-person on election day, while 26% voted via early voting options.

This means that almost 50% of the 2020 election was open to numerous forms of election fraud, fake ballots, unregistered voters, ballots with no ID, empty lots listed as home addresses, multiple jurisdiction voting, dead voters, illegal voters, illegal ballot harvesting, Mark Zuckerberg’s $400 million in fraudulent drop-boxes, boxes of real ballots dumped in ditches, truckloads of ballots delivered after hours in the dark of night and all of it, “paper ballot” fraud.

These indisputable facts alone make it impossible to intelligently argue on behalf of returning to antiquated paper ballot elections for more than 300 million Americans, unless the facts simply don’t matter to you. Some can’t fix the future, due to hanging on to the past in error.

Once you pencil in your paper ballot and hand it in, what proof do you have of how you voted? Can the person you handed it to, be counted upon to register your vote properly, or at all? What if your paper ballot is in one of the boxes dumped in ditches like in 2020? What’s your ability to confirm or audit your vote?

How many “coincidental” fires across the country have taken place under Joe Biden…food processing plants, fuel refineries, gas lines, stores, warehouses, etc.? What if all the boxes of paper ballots burn after the election results are reported?

Face it, with more than 300 million in the USA today, there’s no way to think for even a second that 20th century voting systems are up to the task.

At this point, you can safely totally ignore all global Marxist democrat claims of how secure the 2020 elections were. A Dominion voting machine from Michigan (2020) was just dumped at a Goodwill store, sold on their website, and resold to a private citizen in Ohio via eBay for $1200. The lying Michigan Secretary of State was on CNN this morning trying to preempt the impending fallout by suggesting it must have been stolen by some “MAGA” terrorist.

On August 20, 2022, North American Law Center, an important organization that I contribute to, issued a detailed report on how to secure elections in the future. It’s a detailed overhaul of how elections should be held in the future, which I agree with in principle, due to the facts presented in this column. But it will take longer than November 2022 to enact that plan in the fifty States.

This means that we have a lot of work to do before November 2022, to secure the current mid-term elections, most of which will take place using numerous forms of “paper balloting” again. We have no choice but to STOP fraud found in multiple forms of remote paper balloting, as listed above in this piece…because more than 80% of election fraud took place via paper ballots and remote voting in 2020. This must be a primary focus in November 2022 to prevent another 2020 steal.

Yes, current elections systems are also a problem, but allow me to be clear on that matter.

Election systems basically come in two parts, hardware, the actual “machines,” and software, the “operating systems” installed in the machines to do the real work. The following must be addressed in an effort to prevent software fraud come November.

This means that every “Make America Great Again” patriot has a critical role to play in the 2022 election, beyond just casting a vote and waiting to see what happens.

This time, we have no choice but to directly engage in making secure elections happen. Find election integrity groups in your area to connect with and get involved.

The buck stops with us! If the 2022 elections are as fraudulent as the 2020 elections, it will be our fault. We all know better now. Doing your part far exceeds just voting. If we continue to vote in fraudulent elections, we will continue to get fraudulent results.

Act professionally and peacefully. Evidence is our friend, and the enemy of those currently overthrowing our Republic via fraudulent elections.

Although it has been made so today, due to leftwing cancel culture democrat policies everywhere, this really isn’t a partisan issue at all. Every American Citizen should want, in fact demand, lawful secure elections, no matter their political leanings. We can no longer allow our future to be determined by those who believe their cheating means, is justified by their ends.