Supreme Court Betrays the American People, But State Legislatures Have a Higher Authority

No wise man ever thought a traitor should be trusted.  —Marcus Tullius Cicero

I have learned to hate all traitors, and there is no disease that I spit on more than treachery.  —Aeschylus

A nation can survive its fools, and even the ambitious. But it cannot survive treason from within. An enemy at the gates is less formidable, for he is known and carries his banner openly. But the traitor moves amongst those within the gate freely, his sly whispers rustling through all the alleys, heard in the very halls of government itself.  —Marcus Tullius Cicero

Liberals denounced Senator Joseph McCarthy because they were afraid of getting caught, so they fought back like a clan of hyenas to hide their own collaboration with the evil regime they so loved. We now know from a variety of sources, including Soviet archives, since the end of the Cold War in the early 1990s, that McCarthy’s charges were, in numerous cases, neither false nor hysterical, but correct.

The communist infiltration of America’s politicians and federal government has escalated exponentially since McCarthy’s efforts in the 1950s to expose the murderously evil nature and the massive espionage penetration of the U.S. government.

The socialist democrats and their comrades in mainstream and social media have executed the same kind of war against President Trump throughout his campaigns and his first term in office as they waged against McCarthy. The left hates President Trump because he has never belonged to their globalist establishment cabal, and he knows a communist when he sees one. Media’s propaganda, outright lies and censorship of the truth is a hallmark of communism.And it was our own Supreme Court who helped them.

The 1964 Supreme Court case, New York Times v. Sullivan, in a 9-0 decision by the liberal Warren court, gave media the right to lie with impunity about public figures unless actual malice could be proven.  And media has used this decision to destroy every vestige of liberty, freedom and truth.

These evil and destructive entities have permeated every front, environmentally, economically, agriculturally, socially, mentally and spiritually.  And both foreign and domestic traitors are throughout the upper echelons of our federal and state governments.

Everyone with half an ounce of brain matter knows that President Trump won the 2020 election in a landslide, except of course the overweight bagpipe playing Deep State impresario who runs the Department of Justice.  Just one statistic would show any fool who doubts the theft of this election that Trump won.  The five states who stopped counting late on November 3rd, all had the same percentage of Biden votes come in during the alleged “shutdown” hours.  This is a mathematical impossibility.

First the supreme court denied the Pennsylvania case brought by Congressman Mike Kelly et al. v. Pennsylvania et al.  The case was presented to the court by Justice Alito, but the court denied the request by Pennsylvania Republicans to block certification of the commonwealth’s election results, delivering a blow to the GOP’s bid to invalidate the alleged Biden win.  The theft was openly planned in advance and brazenly executed, which is why Biden calmly stayed in his basement while our President took on an extensive campaign schedule to be with the American people he so loves.

Senator Ted Cruz argued that the Pennsylvania case was not as good as the Texas case wherein 18 states joined the suit, but the Supremes denied the Texas effort that would have essentially nullified the presidential elections in Pennsylvania, Michigan, Georgia and Wisconsin.  Legal experts claimed the case was flawed in several areas and likely to fail. Ironically the three judges placed on the Supreme Court by the President were missing in action and joined the far-left judges in throwing out the Texas case.

The crux of the Texas case was the argument that the four states it is suing, all four of which swung for President-elect Joe Biden, unconstitutionally changed their election statutes in their judiciaries or executive branches, when only the legislature is allowed to make election law. The reply brief from December 11th says that the four states failed to adequately dispute their point that this makes their entire elections invalid.  The justices could have agreed to hear the case and promptly dismissed it or ruled in favor of Texas, or they could have requested oral arguments before ruling. They declined to hear it outright. Far too many judges rule by party rather than by law.

In 2017, we heard that the Heritage Foundation and the Federalist Society were putting together a list of conservative judges for President Trump. Neither of these organizations are truly constitutional conservatives…both are “controlled opposition.”

The idea of the North American Free Trade Agreement (NAFTA) originated with Heritage Fellow Richard Allen and has long been advocated by Heritage policy analysts. American manufacturing and jobs went south to Mexico.

Assuring Affordable Health Care for All Americans was the Heritage Foundation plan, written by Republicans and endorsed by the so-called conservative right. Stuart M. Butler wrote the Heritage monograph. Butler is a Brit who is a senior fellow at the liberal Brookings Institute, the same Institute promoting the privatization of education. Pay particular attention to Item #2 on page six of this document wherein it states, “Mandate all households to obtain adequate insurance.”  President Trump eliminated this unconstitutional mandate.

Heritage has a strong Rockefeller and United Nations connection. They have received grants from Amoco, General Motors, Chase Manhattan Bank and right-wing foundations like Olin and Bradley.  Heritage was/is funded by former board member Richard Mellon Scaife to the tune of $30 million, and Scaife was a devout supporter of Planned Parenthood even taking out a full page ad in the WSJ promoting taxpayer funding of same.  Kathryn and Shelby Cullom gave over $26 million to Heritage; Kathryn was a member of the CFR as well as the League of Women Voters.

Kellyanne Conway and her husband George are members of the Federalist Society, so it would seem logical that as counselor to the president, she recommended them.  The Conways give $50 to $100K to the society every year.  Conway has stated she’d be interested in working for the Biden/Harris administration.

Although the society started out with ultra-conservative and stellar members, it has devolved from its inception.  Members now include pro-constitutional convention Professor Randy Barnett of Georgetown University; Former Energy Secretary, David Schizer who clerked for Ruth Bader Ginsberg; board member Edwin Meese who in 1967, when Ronald Reagan was Governor of California, urged Reagan to sign an abortion bill.  State legislators introduced a therapeutic abortion bill which allowed abortion when it would impair the mental or physical health of the mother.  Reagan signed it.  Meese was also instrumental in the theft of Promis software from Bill Hamilton’s company, Inslaw.

Spencer Abraham is also a member who worked for George W. Bush and was given an award by the National Council of LaRaza.

Another member is David McIntosh, head of Club for Growth, who launched a $1 million smear campaign against Trump in Iowa on Trump in 2016.  As a Congressman from Indiana, he was in trouble with the Ethics Committee. 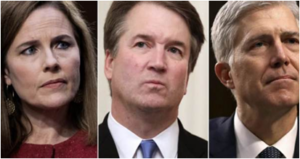 Justices Gorsuch, Kavanaugh and Barrett were in absent ia regarding the Texas case.  All three had helped George W. Bush in his 2000 election case.  I had hoped they’d join with the two constitutional originalists on the court, but once again, they sided with the enemies of freedom.  Gorsuch and Kavanaugh have flip-flopped over and over on cases where they should have sided with Justices Thomas and Alito.

When Gorsuch was nominated, I wrote a number of articles about him.  He and his family belonged to an Episcopal Church with a female priest who attended the pussy hat march and loved it.  She supports abortion and has married same sex partners.  Gorsuch also clings to stare decisis and bad precedent and was a term member of the Council on Foreign Relations.

Kavanaugh was put through a miserable ordeal via Diane Feinstein and nemesis Christine Blasey Ford’s absurd and invalid attempts to derail the nominee.  Ultimately, he was confirmed, and later I felt the entire ordeal was theatre for us dumbed down masses.  Much the same had been done in 1991 to Justice Thomas.

Amy Coney Barrett was confirmed to replace Justice Ruth Bader Ginsburg.  Many preferred Justice Barbara Lagoa, who would have been the first Hispanic nominee with stellar conservative credentials.  Amy belongs to a small offshoot of Roman Catholicism called People of Praise.  I’m not worried about her religious affiliation; I’m worried about the fact that she doesn’t seem concerned that our election was fraudulent, treasonous and stolen.

Yes, there is a higher court and authority than SCOTUS…and I’m speaking of two entities, the Lord God Almighty and in this instance, the state legislatures who have higher and final authority.  But will they go against their state’s electors.  We don’t know.  Republicans have consistently and notoriously been weak; they never fight like the Socialist Democrats.  State GOP lawmakers in Arizona, Michigan, Pennsylvania and Wisconsin have all said they would not intervene in the selection of electors, who ultimately cast the votes that secure a candidate’s victory.

And time is of the essence…

Yes, President Trump won in a landslide.  Demonic and treasonous entities colluded to steal the election from the American people, including the Deep State Socialist Democrats, China, Iran and Serbia…all who worked together via Dominion Voting Systems, their Smartmatic software and programmed algorithms.

We know this…and yet the DOJ, the judiciary and the media are silent.  Treason is swept under the rug never to be mentioned.

I fully believe that the Lord God Almighty put President Trump in power to show us exactly what justice, righteousness and a love of liberty means.  He has been a president like no other.  He is a man loved and adored by every freedom loving American.  The Lord may still see to it that President Trump remains in our White House for another four years, but if He does not, then that means He has another plan for our nation.

Throughout history, when God’s people turn their backs on Him, they lose His blessing and evil thrives.  We never seem to learn.  It’s time for America’s people to realize that the God of Abraham, Isaac and Jacob, and His Son, Messiah Jesus Christ is our salvation and glory.  Without Him, we are lost.

As a final note, write the legislatures of these battleground states…tell them to stand up for righteousness, truth and one person, one vote.  And pray for our beloved Republic which stands at the threshold of the abyss.