The Character Assassination Of Justice Kavanaugh

If Senators fail to establish reasonable rules of evidence, then it becomes a matter of how clever an accuser is at lying. Courts of law do not allow spectacles of irrelevant, unprovable accusations, and the Senate should not have a standard that is lower than that of traffic court. —John Schlafly and Andy Schlafly

When debate is lost, slander becomes the tool of the losers.  —Socrates

When men yield up the privilege of thinking, the last shadow of liberty quits the horizon.  —Thomas Paine

In a July conference call to Democrat leaders, Ricki Seidman, an operative who also advised Anita Hill in her charges against Justice Clarence Thomas, laid out a strategy to defeat the nomination of Judge Brett Kavanaugh.  Seidman is also a former Clinton White House official and current advisor to Dr. Christine Blasey Ford.  Link

Democrats are hoping their second try at slandering a supreme court nominee will be effective.

In a recent article by John and Andy Schlafly, they perfectly describe the attacks on Judge Brett Kavanaugh.

When Clarence Thomas went through this in 1991, it was found that the allegations bore an uncanny resemblance to the book, The Exorcist.  This time the allegations may be inspired by a book by Mark Judge concerning his own drinking binges at the same high school Kavanaugh attended.

But Mark Judge himself described the accusations against his classmate Kavanaugh as “absolutely nuts. I never saw Brett act that way.”

It was a mistake to schedule a special hearing, and delay it by a week, which gives the story-tellers more time to practice and embellish. Allegations about the distant past which lack details are not credible, and the Senate should proceed to vote on Judge Kavanaugh.

Unfortunately, the Senate has again caved to the democrats, and the accuser’s testimony is a week away. 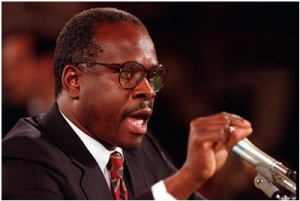 Judge Clarence Thomas was nominated on July 1, 1991 by George H. W. Bush to fill Thurgood Marshall’s seat on the United States Supreme Court.  Thomas’s confirmation hearings were bitter and intensely fought, centering on an accusation that he had sexually harassed attorney Anita Hill, a subordinate at the Department of Education and subsequently at the Equal Employment Opportunity Commission (EEOC). The Senate ultimately confirmed Thomas by a vote of 52–48.

Judge Kavanaugh is experiencing a high school lynching by a woman who can’t remember where or when and can’t even decide if she’ll testify regarding her accusations.

If Ford had truly been “nearly raped,” she would remember it.  Her hazy memory is most likely a cover story, and a way for the democratic socialists to help destroy a truly magnificent jurist. If she testifies, she says she wants Judge Kavanaugh barred from the room.  This is not a trial, albeit media believes it is, but the Judge has a right to face his accuser.  Brett Kavanaugh says he didn’t even know who she was and he’s not sure now that he knows who she is.

When Dr. Ford failed to state whether or not she’d testify by 10 p.m. on September 21st, she was given another 24 hours at the behest of her lawyer and the democrats.  This gives the left more time to embellish their lies so that the Never Trump Republicans can join with them to defeat this eminent jurist.

National Review writer David French takes issue with how Ford’s current recollections diverge slightly from those in 2012 notes from her therapist. The notes say four boys were involved in the incident. Ford told the Washington Post there were two. “That suggests that her memory of the event may be suspect,” French writes.

There is a kernel of truth to this: Human memory is notoriously faulty. It’s a pervasive, frustrating human flaw, one that has led to false convictions, false confessions, and the misidentification of perpetrators in a police lineup.

Judge Kavanaugh, a singularly qualified and brilliant jurist, is purposely being targeted for destruction by the socialist democratic party.  Russia, racism or rapist, that’s the left’s mantra to target any conservative they wish to destroy.  They tried it with Justice Clarence Thomas who believes in the original intent of the Constitution, and now they’re trying it with Judge Brett Kavanaugh. Today’s culture is far different with the zealots of the MeToo gang.

In an effort to increase pressure on Republicans, all 10 Democrats on the Judiciary committee signed a letter to Chairman Sen. Chuck Grassley, R-Iowa, demanding a more thorough investigation. Link  Of course they did. This great nominee is hated by the left and the majority of the Never Trump progressive republicans.

The Daily Caller found “a new political advocacy group that vowed to put $5 million behind an effort to stop Kavanaugh’s confirmation has significant ties to the liberal financier,” Soros.

Debra Katz, the attorney representing Kavanaugh’s accuser, Christine Blasey Ford, is vice chair of the Project on Government Oversight, an organization that has been directly funded by Soros’ Open Society Foundation.  Link

Frontpage Magazine states, “Katz has donated thousands of dollars to Obama, Hillary and the DNC!”  She has even spoken in defense of Clinton and Al Franken.

Fox News reporter/anchor Shannon Bream confirmed the reported that the Ford team wants no questions from lawyers; questions will only be allowed from Committee members, Kavanaugh cannot be in the room when she testifies, and the Judge must testify first. 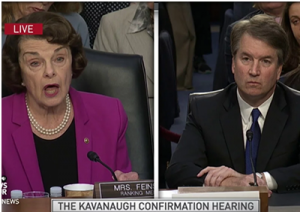 When the Democrats couldn’t derail Judge Kavanaugh via hearings, on the eve of the vote that would lead to the confirmation of Judge Kavanaugh to the Supreme Court, Senator Diane Feinstein decided to pull a rabbit out of her hat.  Combine these democrats with the lingering bitterness and rancor in the Republican Party over the fact that Trump won, and the vote for this amazing jurist is stopped in its tracks.

Sen. Dianne Feinstein orchestrated the leak and subsequent release of Ford’s letter, not merely to sink Kavanaugh and level accusations in a way that would make it difficult for the judge to defend himself, but also to try and delay Republican efforts to confirm any nominee until after the midterms.

The democrats were in possession of Ford’s letter for months and sat on it. Feinstein personally met with Kavanaugh and didn’t bring up this “extremely serious” charge of sexual assault. Why not? She could have asked him about the allegations while keeping the accuser’s name confidential.

Ford allegedly sent an anonymous letter to Senator Feinstein stating that Judge Kavanaugh had shown bad behavior in high school.  Still they needed more.  So, she came forward and allowed Feinstein to use her name.

Most tellingly, before Dr. Ford came out as the accuser, she spent what must have been days, scrubbing her social media accounts of all the lefty activities and statements she must have been involved in. [Link] She is a leftwing political activist and donned one of those stupid vagina hats at anti-Trump marches.  Christine Blasey Ford also signed a letter fighting Trump’s “Zero Tolerance” policy at the U.S.-Mexico border.

Another interesting tidbit is that Ford’s brother, Ralph Blasey III, once worked for the law firm of Baker & Hostetler LLP who made payments to Fusion GPS, but left that firm in 2004. The Daily Caller reported on the connections of this firm with both Fusion GPS and Planned Parenthood. Link

Ford’s lawyer, Debra Katz, is demanding an FBI investigation of Judge Kavanaugh when he’s already been investigated by them six times.  The FBI refused. Katz, is a big-time Democrat donor and has spoken in defense of sexual perverts Clinton and Al Franken.

A friend of Dr. Ford was contacted by Debra Katz hoping she would corroborate the story.  However, she has denied that she was at the party where the alleged assault occurred.  Link

Congress has paid out over $17 million taxpayer dollars for workplace complaints, many of which were for sexual harassment and abuse of women.  We need legislation that would require public disclosure of previous settlements and forbid taxpayer funding in the future.  It appears as though those sitting in judgment of Judge Kavanaugh the real guilty parties.

On Friday, September 21, 2018, 65 women who knew Kavanaugh in high school joined at least 131 other women who testified to his integrity and character over the years.

When an accuser can come forward after 36 years, with no evidence beyond her own murky and rather nebulous account and is unable to remember key details, she should not be allowed to ruin the life and career of Judge Kavanaugh with her unsubstantiated claims. Christine Blasey Ford is a lone accuser who has been strongly denied by both people she implicates.  Proving a negative is impossible, especially four decades later and the timing of all of this is highly suspect. Even those who want to defeat Kavanaugh due to politics should be careful about embracing a precedent under which this approach is ‘rewarded’ as effective.

It all seems so convenient that California’s doddering, crusty senator (Diane Feinstein is the least stupid of California’s two senators, and she’s astonishingly ignorant, especially of the Constitution, the law and protocol) decided to announce this claim in such a manner that Kavanaugh has no way to defend himself. Maybe the red Chinese spy Feinstein had on staff for 20 years gave her some pointers.  Keith Ellison, Al Franken, Bill Clinton and Ted Kennedy were all unavailable for comment.  Link

Does this seem too harsh?  Well the hell with it.  When we have former FBI Director James Comey who admitted he was a communist, along with former CIA Director John Brennan who actually voted for Communist Party head Gus Hall in 1976, we must realize that the entire democrat party and a majority of the republican party have become traitors to our founders, our Constitution, our God, and the American people.

Socialist democrat Christine Blasey Ford will allegedly testify next Thursday in her “hail satan” pass hoping at the last minute to destroy the finest nominee for the supreme court that we have seen in decades.

Remember the Duke lacrosse players? (they were all accused of rape and it was all a lie)

Contact your senators, tell them to vote for Kavanaugh and stop this insanity.