The Decay In America’s Culture, Politics, Media And The Pulpits

Evangelist Leonard Ravenhill said, “Great eagles fly alone; great lions hunt alone; great souls walk alone…alone with God. Such loneliness is hard to endure, and impossible to enjoy unless God accompanied. Prophets are lone men; they walk alone, pray alone and God makes them alone.”  Ravenhill died in 1994, yet if he were alive today, I believe he could easily attribute this quote to President Donald J. Trump.

The rot throughout our society and the disintegration of our once respectful and courteous culture is now obvious even to the most passive.  We’ve become a crass, rude and obnoxious culture. Those in Hollywood, media, and politics show no respect or restraint and spew the most venomous filth publicly against our President.

The socialist left and the majority of the right are outraged that an outsider has disrupted their globalist agenda.  Ill-mannered and uncivilized attacks occur daily throughout America, we’ve all seen it, not just on our highways, but in everyday interactions.

The mere fact that the American people said, “Enough!” and voted for Trump has angered the establishment and the media to the point where they foam at the mouth with their hatred for our President, his family, and his administration. Fox News anchors who support him and the Americans who voted for him are also targets.

Worse yet is the fact that the majority of Republicans are in bed with the left and are doing their best to hinder President Trump from keeping his campaign promises to the American people. 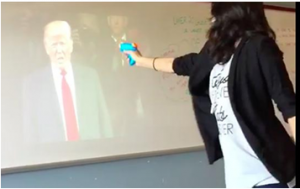 When a teacher openly acts out shooting our President in her classroom and yells, “Die,” she should be arrested not only for sedition but should never be allowed in another classroom.

We’ve all seen the disgusting photo by Kathy Griffin, and we’ve heard the foul-mouthed Samantha Bee who uttered an obscene and sexist misogynistic term about Ivanka Trump on national TV.  How far we’ve come from the days of “I Love Lucy,” when they used infanticipating instead of pregnant when Lucy was expecting her first child.

The vitriol expressed by the left will affect today’s children and our culture will disintegrate to even lower levels.  As goes our language and our courtesies, so goes the country.

Where are our pulpits?

The Culture of Death

Since the great cultural-social revolution of the 1960s, there has occurred what Nietzsche called the “transvaluation of all values.”  What was once morally repellent… promiscuity, homosexuality, abortion and transgenderism is now seen by media and many in our nation as natural, normal, healthy and progressive.

In early 2012, I wrote The Culture of Death and exposed what was being done to the bodies of aborted babies and how aborted fetal cells are in food, cosmetics and vaccines.  In 2015, David Daleiden and Sandra Merritt captured unbelievable videos exposing Planned Parenthood’s apparent practice of selling the body parts of aborted babies.  James O’Keefe of Project Veritas has also exposed this horror.

It was nearly a year before I could tackle the seven-part article entitled, Killing Us Softly about what American Hospice has become, and how the elderly and infirm are disposed of in a timely manner in what is described as both passive and aggressive euthanasia.

The decay and moral turpitude of our nation shows how far we’ve sunk in depravity. There is no sin anymore. The churches no longer preach sin and salvation much less Biblical truth. Not only are we murdering the innocents in the womb, but euthanasia is accepted as a kind and caring way to pass the elderly from life to death with deprivation of food and hydration. Dehydration is, in fact, a terribly painful death. This form of passive euthanasia has been practiced for many decades in America’s nursing homes and by hospice.

Sin used to slink around in the back allies of America, but now the broken sewer spews its filth down Main Street America and no one seems to notice.

Here’s the meat of this whole filthy deep-state spying sedition…the story is not the Trump campaign. The story is not the Russians hacked the election. The story is not the Trump campaign was working with the Russians. The story is the effort by Barack Hussein Obama — and the Democrat Party, and the New York Times, and Washington Post, and Politico, the entire leftist media — to sabotage and destroy the Trump presidency.  Why?  There are many reasons President Trump is hated, but at the top of the list is the fact that Donald J. Trump is not one of the globalist elite insiders.  He is not one of “them.”  But will we ever see the DOJ and FBI corruption exposed and brought to justice?

Where is Director Christopher Wray in cleaning up the corruption of the FBI?

Dwight Moody said the best way to revive a church is to build a fire in the pulpit, and there’s a whole lot of pulpits who need to be set fire to! 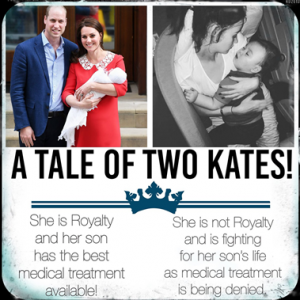 Shirley Edwards’ recent articles on the death of Britain’s little boy, Alfie, are heartbreaking.  Italy offered to help this child, free of charge, but the British health care system would not release the child, for fear of exposing their rotten government-controlled healthcare.  Where was the outcry from the British pulpits?

My Irish Catholic ancestors are rolling over in their graves with Ireland’s annihilated future of their unborn.  A new poll by Pew Research Center indicates European Christians, once the driving force behind the faith’s expansion worldwide, no longer are Christian…at least in terms of what they believe.

They may call themselves Christian, but Pew describes them as “non-practicing” and found that they “drifted away,” “were alienated” or just “stopped believing.” They only rarely walk in the doors of a church.

A referendum in 1983, the Eighth Amendment had been inserted into Ireland’s constitution to safeguard the rights of the unborn. Through it, Ireland had effectively banned abortion. The decision to remove this constitutional safeguard now opens the door to legislation which many believe will usher in one of the most permissive abortion regimes in the world. An unborn baby’s life soon could be destroyed for a mere $350 in Ireland now that the Eighth Amendment has been repealed. The powers that be use the excuse of domestic violence to thrust murdering the unborn down the throats of Ireland’s Catholics.

“Ireland will now join that sad community of nations who throw away irreplaceable human beings through abortion on demand,” Students for Life of America (SFLA) President Kristan Hawkins said in a Saturday press release. “I personally know the pain of abortion and how something sold to you as a simple solution actually becomes a life-long regret.”

“A nation that kills its own children has no future,” said Pope John Paul II.  If that be true, the Republic of Ireland signed away not only its future on this vote, but also the last vestiges of what had been the most distinctive and morally coherent culture in Europe.  Watch this video of life in the womb at nine months, and this video of conception to birth.

The BBC contrasted Pope St. John Paul II’s “triumphal” visit to Ireland, which preceded the adoption of the Eighth Amendment, with Pope Francis’ upcoming visit, during which he will “find a country undoing part of the legacy of a previous papal visit.”

Leading pro-life campaigners from around the world are dismayed at the results from Ireland, which show that the long-time pro-life nation has abandoned its legal protections for unborn children and will eventually approve legislation that will legalize abortions on babies as old as 6 months.  Many parents fight for the lives of their babies born at six months, and pray for them to survive!

The Catholic News Agency states, “The respect for the sacredness of life in the womb originates in Christianity’s Jewish roots. The ancient Jewish world was much different from the surrounding cultures of Palestine where infanticide, infant sacrifice and abortion were not uncommon, and in some cases prevalent. For the Jewish people of those times and orthodox Jews to this day, all human life has as its author in the one God whose creative power produces the child in the mother’s womb and brings it step-by-step to full life. The Old Testament revelation, which the Church inherited and accepted, gives clear evidence that life in the womb was considered as sacred.”

God alone is the Lord of life from its beginning until its end: no one can under any circumstance claim for himself the right directly to destroy an innocent human being” (“Donum vitae,” 5).

Eugenics is Alive and Well in America

Pope John Paul II was right, and it’s happening in America as well.  Our 1920 eugenics operations adopted by Hitler are still alive and well and too numerous to list here. 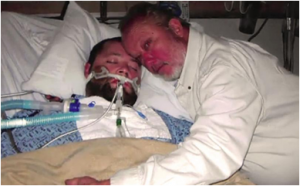 Father Mark Hodges tells the story of an armed father who saved his son’s life.  The doctors said the son had no hope of recovery, but his father believed differently.  Hospital staff even notified an organ donation organization that George’s organs would be imminently available.   George Sr. took a gun into Tomball Regional Medical Center, barricaded himself in with his son and began a three-hour standoff with staff and police, seeking to give his son more time on life support.

Even after he was disarmed, the father remained barricaded in, and even threatened staff and officers, to buy George time on life support.  After three hours, George Jr. surprised everybody, except his dad, by squeezing his father’s hand, on command, three times.

The son the hospital said was brain dead, the son they wanted to harvest the organs of, the son the father knew was not gone…is now alive and well, all because his father protected him at a cost of arrest and imprisonment.  Life…God said, in Deuteronomy 30:15-20, Choose Life!

The pulpits are responsible.  Methodist, Presbyterian, Episcopalian, and Baptist Pastors lead rallies for abortion…understand this, they lead rallies for killing our most innocent in their mothers’ wombs.  The culture of death has permeated the pulpits, where is our hope for Godly truth?

Older Americans remember the victories and their celebrations; they remember Norman Rockwell men standing motionless for the national anthem in baseball stadiums with fedoras held over their hearts; a government that did more than regulate or arrest you; politicians who were revered; newscasters who were trusted; and music that dripped syrup over our spirits and made them sweet and sticky. They remember when there was a right and wrong and who and what belonged with each, whether it was true or not. They remember a time when those in power lied and were actually held accountable. Times have changed.

There was a time not so long ago when the nation was united on a common faith, morality, history, heroes, holidays, holy days, language and literature. Now we fight over them all.

Donald Trump is trying to bring us back to those good times, and we must help him fight for them…or all of our once great country will truly be lost.

[Editor’s Note: You people better wake up and get involved, because if the Democrats take over you will surely lose your country]