The False Accusations And Character Assassination Of Dr. Ronny Jackson

You do what you can for as long as you can, and when you finally can’t, you do the next best thing. You back up but you don’t give up. —Chuck Yeager

Inside many liberals is a totalitarian screaming to get out. They don’t like to have another point of view in the room that they don’t squash and the way they try to squash it is by character assassination and name calling. —David Horowitz.

The Political Demise of Adm. Jackson

Admiral Ronny Jackson was nominated by our President to head the Veterans Administration.  He has a stellar past and amazing countenance. Dr. Jackson is an American physician and a rear admiral in the United States Navy.  First appointed to the role of Physician to the President on July 25, 2013 by Barack Obama, he was retained by Donald Trump after his inauguration in 2017.

President Trump nominated Adm. Jackson to be the U.S. Secretary of Veterans Affairs and to succeed 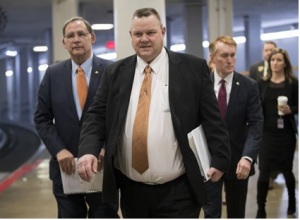 David Shulkin.  However, after a libelous and slanderous attack on the Admiral’s character by Senator Jon Tester (D-MT), Jackson withdrew his nomination on 26 April 18 amidst widely publicized anonymously-sourced, unsubstantiated allegations of misconduct and mismanagement while serving the White House.

Tester went on Trump hating TV Networks to characterize Jackson as a reckless, dishonest, mean spirited drunk.  Asked if he could corroborate these charges he said, “Well, we’re waiting for people to come forward.”  Tester should have proven or shown evidence before going public and maligning a public servant who has been praised throughout his career for treating presidents, including Obama.  The left’s Trump Derangement Syndrome shows they will stoop to anything to resist the Trump team.

The Secret Service has proven every single charge made by Tester to be false.  The Senator owes Admiral Jackson an apology and the American people an explanation. 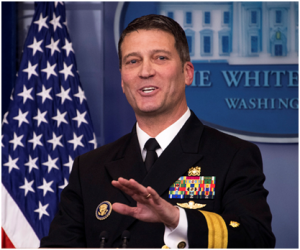 Allegations made by Senator Jon Tester against Admiral/Doctor Ron Jackson are proving false. The Secret Service is unable to confirm (in fact they deny) any of the phony Democrat charges which have absolutely devastated the wonderful Jackson family.

The great people of Montana will not stand for this kind of slander when talking of a great human being. Admiral Jackson is the kind of man that those in Montana would most respect and admire, and now, for no reason whatsoever, his reputation has been shattered. Not fair, Tester!

And Sheriff David Clarke tweeted this:

Dr. Ronnie Jackson’s lynching had nothing to do with thorough vetting. It had everything to do with a WITCH HUNT. If DEMS can’t find any dirt, they’ll just make sh*t up.

According to four administration officials, the main allegations were brought forth by Vice President Mike Pence’s Army physician Dr. Jennifer Pena, who is assigned to Pence by the White House Medical Unit and does not work directly for the office of the Vice President.

Those officials contend Pena has held a long-time grudge against Jackson because of his continuing promotions in the White House. She began her career at the White House during the Obama administration. According to the officials, Pena, who is still active military and assigned to the White House Military Office, did not follow proper protocol to report on the allegations. Instead, she went directly to the Senate with the support of some current and former White House medical staff who were her loyalists. None of the allegations she allegedly brought forth have been substantiated.  See Sara Carter’s article, VP Pence Physician Behind Ronny Jackson Attacks.

Virulent Attacks on Everything Trump

President Trump has repeatedly disallowed the venomous and pernicious attacks on him from the democrats and their cohorts in the media to derail him from doing his job.  And these attacks have continued unabated from the very day he announced his candidacy on 16 June 15.

Trump has tweeted about the lies of James Clapper, and John Brennan has the temerity to tweet back to the President the most disgraceful Alinsky attack on a President I’ve ever seen in public by a former CIA Director.

Mr. Trump, your hypocrisy knows no bounds.  Jim Clapper is a man of integrity, honesty, ethics and morality.  You are not.  Jim Clapper served his country for over half a century, including Viet Nam.  You did not.  By your words and behavior, you diminish the Office of the Presidency.

John Brennan is just as much a liar as Clapper because everyone now knows that buried within a newly declassified congressional report on Russian meddling in the 2016 U.S. elections is a shocking 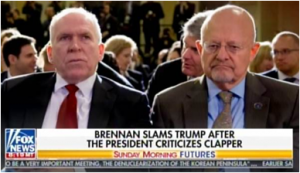 revelation: former Director of National Intelligence (DNI) James Clapper not only leaked information about the infamous Steele dossier and high-level government briefings about it to CNN, he also may have lied to Congress about the matter.

As stated in my previous article, Clapper testified during a March 2013 Senate Intelligence Committee hearing that the NSA was “not wittingly” collecting “any type of data at all” on millions of Americans which turned out to be very much untrue.

Then Brennan goes on to tweet a subtle threat to the President after the House Committee states there was no colluding in the 2016 election:

A highly partisan, incomplete and deeply flawed report by the House Committee means nothing.  The Special Counsel’s work is being carried out by professional investigators, not political staffers.  Special Counsel’s findings will be comprehensive and authoritative.  Stay tuned Mr. Trump.

President Trump didn’t understand this was a fight he had to win. The Trump White House has been repeatedly weakened by leaks and has lost a number of staffers. The Democrats don’t just smell blood – they are drawing blood, and it needs to stop and stop now.  Dr. Jackson will no longer even be the President’s physician!

The Trump administration did make a tepid fight of it but it certainly wasn’t strong.  President Trump also called in to “Fox & Friends” to say that Tester “has a big price to pay” in Montana.  Maybe he will, but Trump’s counterpunches were thrown from an off-balance position when the Trump administration should have been on offense.

These Democratic ploys are stall tactics to keep the President from pushing forward with the agenda that voters put him in the White House to enact.

This isn’t trivial. The Department of Veterans Affairs is in need of a hero to resurrect it from the throes of a corrupt bureaucracy. President Trump heard this firsthand when he met with the veterans organized by Wounded Warrior Project.  Link

Both Trump and Jackson were at fault for not telling Tester and the media to go to hell with their lies.  And that goes for the Republican traitors in the Senate as well, led by the biggest traitor of them all, Mitch McConnell.

Back in February of 2017, a huge lie was propagated by the Obama regime inside the DOJ/FBI.  The set-up was on General Michael T. Flynn because the intelligence community is afraid of him and Flynn knows all about their obfuscations and outright lies.  McCabe and Strzok contrived to Destroy General Flynn and they succeeded.

When the two globalist establishment shills, VP Mike Pence and former Chief of Staff Reince Priebus told the President that Flynn lied to the FBI, they probably knew it was a hatchet job on the General.  Right then our President should have said, “All of you get back to work.  I trust Mike Flynn and we’re not going to allow this to happen in my administration.”

In doing so, he would have stopped the ongoing attacks, told them their bull dung would not work, and the sharks would have circled and gone away.  That was our President’s first mistake.  He’s not perfect, but he has cost one of the finest American patriots and knowledgeable intel officers both financially and personally, and he apparently has not learned from that mistake.

Now another great patriot, Ronny Jackson, was the target of libelous and slanderous attacks on his reputation and person.  He and his family have suffered because of it, just like General Flynn.

We all suspect Schumer was responsible for Tester’s attack, just as we know McCabe and Strzok were responsible for the attack on Mike Flynn.  These two military men are returning heroes who fought valiantly for our nation.  President Trump, you need to stand and fight for them…every single time.  Never ever give up.