“The Message” Reveals Truth About Eugene Peterson But Not God

When the new “modernized” version of the Bible titled, The Message written by.Eugene Peterson suddenly materialized in the bookstores with lots of press attention, my own thinking was, “Here we go again. Why do we need another version of the Bible?” It was a proper question. It seemed like every other month another ‘modernized’ version of the Bible was popping up somewhere. Every new arrival would belch out the same pitch, “written in modern up to date language (many words were changed altogether missing precisely what that sentence intended to convey.)“But,” they proclaimed, “this new and changed language can be better understood.” 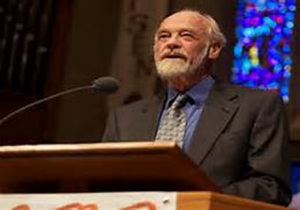 This new ‘Bible’ was needed, say they, since many people cannot grasp the King James Language of the original Bibles. “This is why we need a clearer up to date Bible that everyone can understand which will result in more decisions for Christ.”

When the New International Version (NIV) was birthed in the 1970’s it appeared that everyone associated with the Assemblies of God Church felt that this was the greatest new thing since corn flakes. Pastors immediately began preaching from the NIV re-written texts. The theological errors were numerous and disturbing. For example, they left out the blood of Christ. It came off like a Cliff Notes of The Bible but, the content was faulty on every other page.

I did a class one night where Scriptures were read from the King James Bible and then someone else read the same Scriptures from the NIV. Attendees began to gasp as the readings went on and the total difference in the Scriptures became so obvious that at one point it almost became scandalous as it could be seen that these NIV people had basically re-written the entire Bible, leaving out key issues.

THEN the ultimate re-written Bible of all was introduced and exploded on the scene like fireworks at an outdoor popcorn party.  Notice I used “re-written,” NOT paraphrase. At one time I had 26 translations of the Bible in my library, such as The Phillips Bible and too many others to mention. These were not re-writes to change a particular meaning or word or simply edited in an attempt to clarify words. Those translations were real and absolutely valuable when seeking deeper meaning of a term used in the texts or simply to clarify a word. These were not cheap knock-offs of The Bible itself.

Peterson (we won’t refer to him as ‘Reverend since he does not have the heart of an authentic pastor) then received so much attention that he felt he had star status and could say anything he wanted. THEN the fireworks finale lit up the screens of the internet.

He began giving interviews and the trap was easily set.  He was asked by the interviewer of Religious News Service if he would ever officiate at a same-sex “marriage.” He said,’yes,’ than stated that the Presbyterian Church USA performs many same-sex “marriages.”  (This is very sad for this columnist who grew up in the Presbyterian Church, which at one time was THE church, where ‘proper’ God believing people attended.

Peterson often spoke in favor of LGBT people, once stating publicly, “There are gay and lesbian people who seem to have as good a spiritual life as I do.” Then he latched on to ‘situational ethics” by blubbering, “There is no right or wrong.” Really?

Wait! Isn’t he a minister? Doesn’t  he have “Reverend” in front of his name? There is no way he can claim those titles when he lets it be known that he will participate in any perversion that comes along, something that God specifically prohibits. This is made clear throughout the Bible. The first chapter of Genesis tells how and why he created MAN and WOMAN who would leave their parents and cling one to another.  They were to procreate. God allows for NO sexual deviancy. He made it clear that sex is only to be between a man and woman who are married. That is when sex is the most exciting.

When sex is pure it has a sacred thrill to it. Those on the prowl never know the genuine excitement that God-given sex can provide. And they remain frustrated throughout their lives since they will never know what true satisfaction is.

Of course, the moment Peterson’s perverted statements went out it started an uproar. Within 48 hours, Peterson retracted his statement. Too late, He had already exposed the secrets of his inner-being.  Bookstores like Lifeway Christian Books, a huge chain, has said they will discontinue carrying his books. Other book stores have said the same.

So what do you think? Should a pastors’ books be banned from Christian book stores when they prove to be insincere, not living a biblical life, indeed exposing themselves as hypocrites?

Here is the answer from this writer: I have a great respect for books and for authors, even authors I disagree with, such as many philosophers I read who are atheists. They are writing their thoughts sincerely. I am intrigued how the thought process of scholars function as they analyze a social issue and work toward a conclusion.  I am fascinated by epistemology directing scholars to reach their final thoughts.

I also know what goes into a book. It is an endeavor where the author pours his very being into the book, revealing his deepest thinking process that leads to his breakthrough ideas.

HOWEVER it is an entirely different matter when someone claiming to be a minister and theologian is actually a hypocrite who uses words, not from the heart, but words he has picked out of the air to make a book that will appeal to believers. When I read a Christian book I want to read words that are pure, that come out of a pure heart, not from a deceptive heart  that defies the wishes of God.

Yes, the Christian book stores should not carry his books. This is rare for me since I love my library. However, I’ve already gotten rid of my own copy of The Message. None of Peterson’s books will be in my library again.  If I had the space available I would fill several pages of “Scriptures” as written and given to the world by Eugene Peterson so you can see for yourselves. And to think I have seen respectable pastors preaching their sermons from that abominable Bible re-write, not the Bible itself.

Quick Question: Why do Christians think that we have to constantly make new versions of the Bible? Ask yourselves this question. Have the Muslims ever re-written their so-called sacred texts?  Can you imagine them ever doing so?  The original Bible should be what is on the pulpit, which is what first came to us and will never be out of date.

Am I being too judgmental and harsh for the feelings I have about a pastor committing or endorsing sin? No. We must confront sin and uphold God and His Word. And what about the criticism of us calling some sins more serious than others, like homosexuality?

Homosexuality is a completely different category of sin. It affects everyone. It affects children (who should be allowed to grow up without exposure to deviancy in their formative years. We are guilty for allowing this to happen.

PASTORS, MAN YOUR PULPITS. Christians, let’s get rid of these phony pastors like Eugene Peterson who are not only illegitimate but are hypocrites. More people leave the church and even a relationship with Jesus Christ because of these bogus preachers than any other single reason.

And each of those arrogant frauds will have to stand before the White Throne Judgment.  Read Ezekiel 3. This tells how anyone you turn away from God by your actions and personal conduct will require their blood on your hands. You will be held totally responsible. This is a serious offense that will be punished severely, especially those pastors and ‘reverends’ who falsely use those titles.

Mr. Peterson has a unique take on the Bible. He believes that we are to love the sinner…AND…love the sin. He may as well create The Church of Evasion..Perhaps he already has. We don’t really believe that God had that in mind.

There are only two choices to make in life: Do it God’s way–or don’t do it at all. This is what gives validity to the titles of ‘Reverend” and or Pastor..The preacher who does not do it God’s way is a con-man who has no right to refer to himself as a Reverend or a Pastor.

Get involved with a Bible believing church and join a Bible study class. Fill yourselves totally with God. Our relationship with God is what will be our strength and guide us in these coming last days.

And please, readers, show this story to every pastor you know. It is time to hold the microscope up to ourselves.