Home/November 2022, Opinions/The Rainbow Is The Miracle Sign of God That He Wants Us To See

I have done avid research into the rainbow for many years. There is so much information that I feel called to share with the world. This will open people’s eyes to understand the spiritual significance of the rainbow.

The rainbow is the sign of the son of man. In the Old Testament King James version, it is called a token in the book of Genesis and a sign in the New Testament. The Holy Spirit directed me to do the proper research to connect the rainbow to the sign. 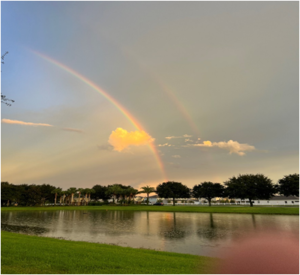 The word token used in Genesis comes from the original Hebrew word “owth” which can be looked up in the Strong’s Concordance. It means a signal, mark, miracle, sign, or token.

The Greek word for sign used in Matthew 24:30 is “Semeion” which means supernatural miracle, sign, token, wonder. Here are the scriptures that connected the rainbow to the sign.

A mystery that has long been hidden is the sign of the Son of Man referenced in Matthew. I have often asked myself what this sign is. I prayed on it and pondered it for many years. Then one day I started looking some of the words up in the Strong’s Concordance and it sent me on an exploration journey. The most magnificent aspect of this journey was all the rainbows I began to see after doing this research. The scriptures opened my eyes to connect all the dots and I began to see all these connections with rainbows, clouds, signs, tokens, and Jesus as the Light of the world.

The clouds of heaven have the rainbow and represent the glory of God. His light shines in those clouds. That light is the rainbow. God is telling Noah that when he brings a cloud over the earth that the rainbow shall be seen. There is no way that a covenant of this magnitude isn’t linked to Jesus when it says that Jesus comes back in the clouds.

“Behold, he cometh with CLOUDS; and every eye shall see him, and they also which pierced him: and all kindreds of the earth shall wail because of him. Even so, Amen.” – Revelation 1:7

“And immediately I was in the spirit: and, behold, a throne was set in heaven, and one sat on the throne. And he that sat was to look upon like a jasper and a sardine stone: and there was a RAINBOW round about the throne, in sight like unto an emerald.” – Revelation 4:2-3 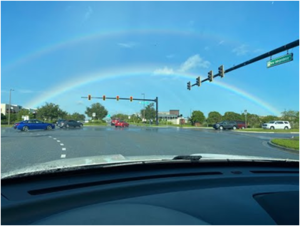 More biblical validation to prove that the rainbow will be in the clouds when Christ returns comes from the book of Ezekiel.

“And I looked, and, behold, a whirlwind came out of the north, a great CLOUD, and a fire infolding itself, and a brightness was about it, and out of the midst thereof as the colour of amber, out of the midst of the fire.” – Ezekiel 1:4

The brightness within this cloud is the Rainbow. The dramatic passages that prove this and link the cloud and the rainbow together which also is linked to Revelation where the rainbow is over the throne proves that this is the greatest miraculous sign from heaven that God wants us to see and understand.

You can watch this powerful sermon that I made to fully grasp and understand the miraculous rainbow connections and signs.

What has given me amazing validation of this teaching has been all the rainbows I have seen personally over the past three years. If you go to my ministry website page here, you can see some of them. 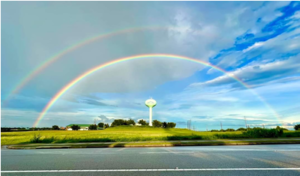 One of the most dramatic ones is a rainbow that my sister’s friend took in Clermont, FL in September 2022. It was right near the top of the high hill. They know that I am passionate about the rainbow so she sent me the picture. It is a wonderful looking double rainbow.

As I looked intensely at the picture I saw what appeared to be a face. Then I enlarged it, and this is what I saw.

One of the biggest battles going on between God and Satan is over the rainbow. Before the devil fell, he was the light bearer in heaven. You can read more about this in Isaiah chapter 14 and Ezekiel 28. When he fell and was kicked out, he lost his access to the light. He is now the son of darkness. The power of darkness is Satan and Jesus came to deliver us all from it.

“Who hath delivered us from the power of darkness, and hath translated us into the kingdom of his dear Son:” – Colossians 1:13

Almost all the rainbow symbols being used around the world are mockeries of the truth. Satan is using the six colored rainbow flag as his master symbol to promote the most vile and despicable movements that have ever existed in history. The real rainbow is seven colors not six. Jesus is the Light of the world. That light is the rainbow. All pure white light from heaven breaks into the seven colored rainbow.

Satan is trying to lock mankind into his 666 system of darkness. The true light of heaven is Jesus Christ. His light will be put into everyone he resurrects or transfers to his kingdom. The deep mystery of God is that once that light gets put into those that are linked to heaven, they will never be able to die. They will have bodies of perfection with the seven colors of the rainbow linked to the DNA and cells of all those saved.

The devil knows this, so he is doing all in his power to try to block and stop all of mankind. Therefore, the world’s anti-biblical sexual revolution agenda worships the six colored rainbow. Anyone caught up in this evil who doesn’t repent and turn to the truth and the real Light of the world, who is Jesus Christ, will be blocked from heaven. There is much more I will cover in future articles. I hope you enjoy and share what I’ve covered thus far.

About the Author: Gregory Ciola

Greg Ciola is the editor and publisher if Crusader Magazine, a powerful alternative health publication that supports a coalition of activists around the world who are deeply concerned about important health issues. Ciola's publication has built a reputation for journalistic honesty and integrity. Ciola believes that there is a conscious effort going on to sabotage our health. He feels compelled to inform people about the truth so that we can all be more empowered to make healthy decisions towards wellness.