“Surrender unto me the Little Children” emanates from biblical sources surrounding the life of Jesus, but what we mean here is far removed from any biblical connotations.  Children are like clay, you can mold them into anything you want; good, just men and women, or murders, killers, thieves and brutal dictators, provided you start early enough in their life, like at birth, or in their formative years in the elementary, middle and high school grades.  As many of you know, Hitler was very aware of this fact and established what was called “Hitler’s Youth”.

The Hitler Youth was a logical extension of Hitler’s belief that the future of Nazi Germany was its children.  The Hitler Youth was seen as being as important to a child, as school was.  Nazi education schemes partly fitted in with this but Hitler wanted to occupy the minds of the young in Nazi Germany even more.  Movements for youngsters were part of German culture and the Hitler Youth had been created in the 1920’s. By 1933 its membership stood at 100,000.  After Hitler came to power, all other youth movements were abolished and as a result the Hitler Youth grew quickly.  In 1936, the figure stood at 4 million members. In 1936, it became all but compulsory to join the Hitler Youth.  Youths could avoid doing any active service if they paid their subscription, but this became all but impossible after 1939 because of the war.

Most Americans are unaware what the Federal Government has done and is doing to America’s youth, is tantamount to what Hitler did during his rise to power, only on a lesser scale.  You can decide if the motives of the American government are evil or benign. 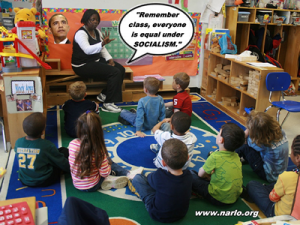 that mandated the teaching to children of 5th through 8th grades, the U. S. Constitution and how the U. S. Government works, purportedly as lessons in civics.  We investigated further.  In the legislation, two textbooks were mentioned as being required for study.  The first was “WE THE PEOPLE” and the second was “PROJECT CITIZEN”.

Upon a brief review of the subjects we found that the texts and supporting literature kept mentioning the term “Constitutional Democracy” and yet anyone familiar with our American History knows full well that America was created as a “Constitutional Republic”.  You won’t find any mention in the textbooks of a Constitutional Republic.  But the distinctions are significant to American freedom and liberty.   A Democracy gives the majority absolute power and creates what has been called an “Absolute Democratic Monarchy“, very similar to what American government has evolved into today.   But a Constitutional Republic protects the minority from the tyranny of the majority, the well-defined design of the Founding Fathers.

At first we thought these were textbooks created for the state of Washington.  But to our surprise it turns out they are published by the Center for Civic Education (CCE), a non-profit, non-governmental organization (NGO), that is almost wholly funded by the United States Government.

Here is a truncated history of CCE:

1969    The Center became affiliated with the State Bar of California.

1969-74  The Center was funded by the Law Enforcement Assistance Administration of the U.S. Department of Justice and the California Council on Criminal Justice to develop and implement the Law in a Free Society professional development program in ten major school districts in California. The program was based on concepts fundamental to an understanding of politics and government. It was conducted under the auspices of the Extension Division of the University of California at Los Angeles.

1974    The Center became a program of the State Bar of California.

1979 The Center became part of a consortium implementing civic education programs throughout the nation funded by the U.S. Department of Education under the Law Related Education Act. Other members included the Constitutional Rights Foundations of Los Angeles and Chicago, Street Law, and the Special Committee on Youth Education for Citizenship of the American Bar Association.

1982    With funding from the U.S. Department of Justice, the Center began the Youth for Justice program in conjunction with the Constitutional Rights Foundation, Street Law, the American Bar Association, and Phi Alpha Delta. The Center promoted the implementation of its Foundations of Democracy program through this funding.

1994    The Center published the National Standards for Civics and Government, developed in conjunction with more than two thousand scholars, educators, and members of the general public. The National Standards have been widely used as a model for state curricular frameworks and standards throughout the country and in a number of other nations describing what students should know and be able to do in the field of civics and government at the end of grades 4, 8, and 12.

1996     The Center started the Campaign to Promote Civic Education, a fifty-state effort to encourage states and school districts to devote systematic attention to civic education from kindergarten through twelfth grade.

2007    The Center published Elements of Democracy, a resource for high school, college-level, and adult audiences that consists of the range of ideas that make up the vocabulary of democracy.

As we said, throughout CCE documentation a Constitutional Republic is never mentioned.  They instead refer to government in America as a “Representative Democracy.”

“Representative Democracy in America: Voices of the People is a national project designed to reinvigorate and educate Americans on the critical relationship between government and the people it serves. The project introduces citizens, particularly young people, to the representatives, institutions, and processes that serve to realize the goal of a government of, by, and for the people.”

“The project is implemented by the Alliance for Representative Democracy, a collaborative effort of the Center for Civic Education, the Center on Congress at Indiana University, and the National Conference of State Legislatures. Representative Democracy in America: Voices of the People provides innovative educational materials for K-12 classrooms, conducts the Campaign to Promote Civic Education, and informs the general public about representative democracy through a variety of media. To learn more, visit the program’s website or download the RDA brochure.”  (the links are “hot”)

The total influence of CCE on the educational process in America and internationally cannot be understated.  They are the bible, the dictionary and Black’s law all rolled up into one neat giant Progressive organization funded by your tax dollars.  Most of you never heard of CCE.

The federal government took control of the curriculum in our schools in 1994, with the passage of three bills.  The “Goals 2000 Educate America Act”, the “School-to-Work (STW) Opportunities Act”, and the “ESEA reauthorization Bill” (the infamous H. R. 6).     The people who designed the 1994 laws knew exactly what they were doing.  They put part of the package in one law, part of it in another law, and the remainder in the third law.  The language in Goals 2000 states about 20 times that everything is “voluntary.”  But H.R. 6 says that, if a state doesn’t comply, it will lose all its federal education money.  These bills and laws are deliberately deceptive.

Like so many federal laws in today’s government, they filter down to state and local levels because of the leverage the federal government has over the purse strings.  Comply or lose federal dollars is hardly a voluntary program.  None of the states are independent enough to resist federal blackmail.

This brings us back to the Center for Civic Education (CCE).  CCE has been authorized by federal law to determine the federal curriculum in civics and government.  Under H. R. 6,  CCE is being funded with our tax money.  There were no public bids for publishing these textbooks.  So one company, whose board of directors and advisors lean heavily towards the left’s agenda, is determining what is being taught to our children in public schools about how our government works, mandated by federal law and then followed up by enabling state law, as the State of Washington has done.  The curriculum is further implemented by tailoring testing to the new paradigm.

Every day, as we search deeper and deeper into the bowels of the operations of our government, at every level, we find a premeditated effort by government to dismantle American constitutional law, American culture, American sovereignty, American freedom, American liberty and American property rights.  As we connect the dots with the accumulation of more information, we can come to no other conclusion that this is being done with malice aforethought and a specific one-world-order agenda by an elite cadre of international and national individuals who have designs on manipulating all of the humans on this planet, by controlling the law, the money, the food, the water, the energy and mineral resources, and the land.

America cannot survive as a sovereign, free nation with this continuous and draconian assault on our sacred institutions of liberty, by our own government, while the “Consent of the Governed” stands idly by and does nothing.  Unless the people wake up to what is being done to them by stealth and by traitors to the American experiment with freedom, that experiment will disappear into the opaque dust of history, as have all other such experiments since the dawn of human civilization.  The people will one day awake to the chains that have been wrapped around their feet, their ankles, their necks and their very way of life, and they will be the “property” of the government, if they aren’t already.

It is the explicit goal of the National Association of Rural Landowners to awaken the masses and encourage them to take action, before it is too late.  We will be conducting further research into these programs and textbooks that are being published by CCE, as mandated by federal and state law.  We intend to get to the bottom of this government conspiracy to control and mold our children by brainwashing and indoctrination to a mindset that is without question, un-American.

“Surrender unto me the little children, for they will be the leverage and the means to enslave their parents and all future generations.”    Ron Ewart

But that’s OK.  No one is going to do anything about it anyway until someone finds a way to re-educate three lost generations.  The task to re-educate that many people is so formidable that sadly, it may take a civil war to undo what government and special interests have done to what once was a Constitutional Republic.