Part 1: The Dark Agenda of Hillary’s Russian Involvement As Secretary of State and Why No Investigation

Why are American technology companies in cahoots with the Russians? What are their future plans? What was Hillary Clinton’s part of the agenda? 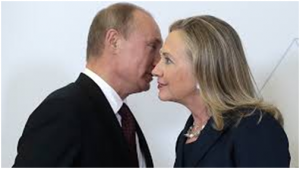 Hillary’s Russian Reset in 2009 happened to be more intense than most people are aware. The entire bizarre conspiracy of the Russian/Trump fiasco in American politics may be a smokescreen for Russian ties hidden under the Obama administration. Russian turbulence continues to hang over the Trump administration even after ex-FBI Director Comey testified to Congress that President Trump was not being investigated.

But, here’s the reality: Former President Obama and former Secretary of State Hillary Clinton have the REAL extensive ties to Russia. Together they created an open beltway under the radar for Russia to exchange technology transfer, nuclear energy, neural brain research, and an assortment of extensive research. This was done via a bilateral agreement that would strengthen the Russian economy. The bilateral agreement lasts until the year 2020. This exchange has both countries cooperating in business mergers and acquisitions, multiplying investments in venture nano- 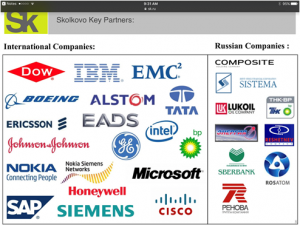 technology, education, urban development, and nuclear waste energy. [Link one] and [Link two] Key businesses in the United States have already invested millions of dollars flowing into a new technology corridor, dubbed the “Russian Silicon Valley,” called SkolKovo. The following is a Who’s Who rocking the Russian borders to invest in Russia’s SkolKovo: CISCO paid $1 billion to be on the ground floor of technology gained by Russian influence. American investors and key universities such as MIT, are capitalizing on this, cooperatively converging vast scientific and technological advances made by Russian scientists. (Sources: Source one and Source two)

The hoopla created by Hillary Clinton at the 2016 Presidential debates, and trying to connect Donald Trump to Russia, has obscured the issues. There is actually a complete opposite tale of the real truth that has not been exposed. The piling-on by the media, zealous to connect President Trump to Russia, is a clever ruse to obstruct the facts. The public is not aware of the extent that Hillary Clinton was involved with the Russian Reset, involving millions of dollars and multitudes of businesses and universities, all advancing the United States in partnership with Russia. What did Hillary Clinton get in return? Donors for the Clinton Foundation.

Once you glance through the lists of high tech businesses and higher ed cooperating with Russia, you will have to ask yourself the obvious questions. Can we really trust Russian motives? What do they want from us? And what do the techies want from Russia? (More on this in Part 2.)

The Russian Reset began with the Presidential Bilateral Commission to improve relationships and cooperation between the governments of Russia and the United States. No longer would Russia be radioactive to American interests. Although President Obama pushed the supposed agenda of Russian interference with the election, it was the former President and Secretary of State Hillary Clinton that finagled business deals with Russia prior to that time. Lucrative, under-the-table pay-outs to the Clinton Foundation, and paid speeches for Bill, served as the ultimate incentives. Many start-up companies notably had deep Clinton ties.

The Bilateral Commission would work at identifying areas of cooperation and pursuing joint projects and actions that strengthened strategic stability, international security, economic well-being, and the development of ties between the Russian and American people. Scientific talent would also be siphoned off of Russia and transported to the US.

In March of 2009 Hillary Clinton met her Russian counterpart, Foreign Minister Sergei Lavrov, in Geneva, Switzerland. Secretary of State Clinton presented Lavrov a yellow box with a red button to symbolize a “reset button.” Two years later in March of 2011 Vice President Biden met with Putin in Moscow, in an act which reaffirmed the US-Russia ‘Reset’.

The first major part of this technological cooperation included Russian plans to create their own version of Silicon Valley. Their research facility on the outskirts of Moscow, named “Skolkovo,” would be developed with the cooperation and investment of major U.S. tech firms. In May of 2010 the State Department facilitated a Moscow visit by 22 of the biggest names in the U.S. venture capital market. Cisco pledged $1 billion to Skolkovo, with Google, Intel, and Bill and Melinda Gates entering into agreements. The cooperative would match Russian brainpower with U.S. investment dollars, and provide the entrepreneurial know-how to spark technological breakthroughs in a wide variety of start-ups.

It is interesting to note that Cisco, Google, Intel, and the Bill and Melinda Gates Foundation happened to be major Clinton Foundation supporters, with dozens more companies becoming involved with Skolkovo after the Hillary involvement. It was Secretary of State Hillary Clinton who arranged meetings with the high tech companies. Emails, of course, were deleted on Secretary Clinton’s computer, so the exact communications between Russian operatives and donors are supposedly missing. This missing information appears to be indicative of a massive cover-up to conceal the violation of the Espionage Act by using an unauthorized server.

The key to the Bilateral Agreement is:

“…technology transfer and investment, and the Commission played a key role in everything from intellectual property sharing to export licensing to facilitating American investment in Russia and Russian investment in America.

“The FBI warned tech companies about Rusnano, a Russian venture capital firm that technology would have dual use between the defense and civil sectors where technology could be used for revolutionary changes in weapons and defense.” (Source:)

“The opening of a Russian Innovation Center (representing Rusnano, Russian Venture Company, and Skolkovo) in the Silicon Valley will act as another bridge connecting American and Russian high tech companies, investors, and scientific research institutions.”

“To get American companies to participate in Skolkovo, the Russian government promised to give American firms special access to research and projects taking place in Russia. Companies participating in Skolkovo would receive special tax status and access to the Russian market. They would also receive special access to research in Russia. For example, one investment firm received “priority access to the database of the Skolkovo Foundation projects and companies, enabling it to select the most promising projects early in their development.” It further allowed companies to “refer their existing portfolio of companies to Skolkovo” for research. There was also the prospect of gaining access to Russian markets, which had been hampered by export licensing issues involving the export of sensitive technologies. The U.S. State Department had major responsibility for the issuing of export licenses and maintained the list of restricted technologies.”

“In 2014, the FBI sent letters to a number of firms involved with Skolkovo in what was called “an extraordinary warning issued to technology companies. The FBI’s Boston Office warned U.S. tech companies that Skolkovo could draw them unwittingly into industrial espionage.” (Note: The following report hashes out a vigorous discussion and complete details of the close ties of the Clinton’s to Russia:)

Many believe the Kremlin’s motives for attracting cooperation from hundreds of foreign technology companies aren’t entirely benign. Among those who would benefit from the “huge honey pot” for the Russian technology industry, says Seattle-based cybersecurity expert Jeffrey Carr, would be the security services who monitor every byte of Internet traffic. “If you’re wiring a facility,” he says, “the best time to do it is while it’s being built.” Skolkovo, he says, would provide an information-gathering “coup.” (Source:) 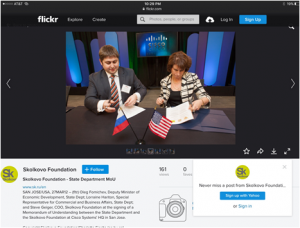 The “danger” information was given to the tech companies by the FBI Boston office. Was that information heeded? It appears not. Hillary’s State Department actively and aggressively encouraged American firms to participate in Skolkovo. The State Department developed numerous and alarming relationships with this Kremlin-controlled entity. Plus, Hillary’s controversial campaign manager John Podesta, who was also Bill Clinton’s Chief of Staff, has woven many paths passing the “honeypot” with Putin’s investment company, Rusnano, which invested $35m in Joule Global Stichting where Podesta was a member of the board which also included Anatoly Chubais, the Chairman of Rusnano, who also joined the Joule board of directors. Genetic Engineering and Biotechnology News reported that Rusnano invested $35m to build a research center in Russia. (Source: Source one and Source two)  It appears the honey is dripping everywhere while deepening economic and technological ties to Russia.

There was no need for Russia to conduct industrial espionage. We were giving them business partners and technology. Many Memorandums of Understanding (MOUs) signed by U.S. companies to invest and cooperate in Skolkovo were signed under the auspices of Hillary Clinton’s State Department. (Sources: Source one and Source two)

Is it any wonder that former Secretary of State John Kerry stated, “Buy Rosetta Stone and learn Russian,” at his recent Harvard speech in May of 2017?

Who’s watching? Tech firms including CISCO, IBM, and SAP allow Russian authorities to review product source codes. Are we in a downward spiral?