The Clowns Entertaining the Goats! How do you Justify the Unjustifiable?

The chief danger that confronts the coming century will be religion without the Holy Ghost, Christianity without Christ, forgiveness without repentance, salvation without regeneration, politics without God, Heaven without Hell.” –William Booth, Founder of The Salvation Army

It has been brought to the light that there are those in this country that want to make the following Monday after the yearly “Super Bowl Sunday” a national holiday. They have found that more people in this country lie to their bosses using that day as a “sick day” than any other day of the year (Exodus 20:16).

I can see why that may be when it comes to the American church of today, teaching a false grace (Galatians 5:13) and teaching them, or rather not teaching them, what it means to obey the Lord’s 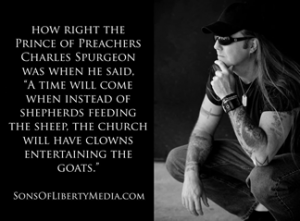 commands. They are teaching a counterfeit Gospel and have become an absolute embarrassment and reproach to those that are true Christians.

“Yea, and we are found false witnesses of God; because we have testified of God that he raised up Christ: whom he raised not up, if so be that the dead rise not.

For if the dead rise not, then is not Christ raised:

“Beloved, when I gave all diligence to write unto you of the common salvation, it was needful for me to write unto you, and exhort you that ye should earnestly contend for the faith which was once delivered unto the saints.

For there are certain men crept in unawares, who were before of old ordained to this condemnation, ungodly men, turning the grace of our God into lasciviousness, and denying the only Lord God, and our Lord Jesus Christ.” -Jude 1:3-4.

Last week on Super Bowl Sunday, I sent a quote from George Orwell to an acquaintance of mine concerning those that were all caught up into what was going on with sports and how they are simply being controlled, and might I add, enslaved.

“Football, Beer….  filled up the horizons of their minds. To keep them in control was not difficult.” –George Orwell

The response was, “It’s a form of entertainment.”

However, did you know that the word “tain” is derived from the word entertainment, actually means to stop from entering in?

He went on to say, “When people decide to attend the event, they are exercising their freedom in making that decision.”

Then, he attempted to justify the unjustifiable by “Overlooking the deeds of the wicked” (Jeremiah 5:28) such as abortion, sodomy, corruption in our Church and Governmental institutions etc., by saying that these events also provide jobs and cash flow into our economy.  Of course, to be taxed more to pay for the abortions on demand (Proverbs 6:17), same sex couples (Leviticus 18:22, 20:13; Romans 1:24 etc.) and ungodly and corrupt politicians.  He said it is not my god, it’s an activity that brings people together and creates memories.

Let me share with you the memories that it is creating for a godly family.  Last week, I took my family to dinner and, of course, wherever you go today, you are surrounded with televisions at every turn to keep you diverted away from the family that you are attempting to spend time with.

My son, who is 12 years old, caught a commentator talking of the Super Bowl and a coach that had the courage to deflect all of the criticisms from the media.

My son then heard them talking of how the players are going to be escorted from the Mall of America to the stadium in Minneapolis (That the tax payers paid for without my approval) which was 9 miles away.

After hearing this, my son blurted out, “They treat them football players like they are rock stars.” He said, “Dad, they get paid millions of dollars and our military guys only get paid about $38,000 a year.”  I responded with, “This is all about diversion and control to keep people entertained from what they should be doing.” (John 14:21)

Firstly, courage and the coach is nothing compared to courage on the battlefield. This is about stealing honor from those that are on the field from them that fight to give them the privilege to be there!  I also said, “Keep in mind that these are the same football players that refuse to stand for the veterans that paid the ultimate price to give the gift of freedom through their sacrifices for them to even be there in the first place!”  (John 3:16)

And people wonder why Jeremiah 1:16 has to come into play?

“And I will utter my judgments against them touching all their wickedness, who have forsaken me, and have burned incense unto other gods, and worshipped the works of their own hands.”

This falls to the lot of those that do not understand that their money, their adoration and loud praise that they give up to a bunch of grown up men in tights fighting over a pig ball, is an offense to the God that gave us all things to enjoy.

Then this justifier of the Super Bowl said to me, and I knew that it was coming, “What about the churches that held Super Bowl parties?” He then proceeded to send me his Sunday morning service itinerary. Here it is….

The Salvation Army (not what it was under William and Catherine Booth mind you) February 4, 2018

Now after looking at this itinerary, we can clearly see at every given step of the way, its aim is the Super Bowl football game!

Thou shalt not make unto thee any graven image!

Oh, how right the Prince of Preachers Charles Spurgeon was when he said, “A time will come when instead of shepherds feeding the sheep, the church will have clowns entertaining the goats.”