TRICK OR TREAT:
A children’s custom of calling at houses on Halloween with the threat of pranks if they are not given a small gift.

TRICK OR TRUMP:
The Democrat Party’s custom of using any means necessary during election season to attain political power with threats of violence and anarchy if they are not elected in order to stop Trump’s pro-American agenda.

Midterm elections have often meant the loss of House and Senate seats for a sitting president. For the upcoming midterm election, voters will have to decide between trick (Democrats) or treat (Trump).

TRICK OR TWEET:
TRICK: The mainstream liberal media has removed all pretenses of impartiality. They believe they are the only legitimate arbiters of truth and news and think it is “un-presidential” for a sitting Republican president to refute them using tweets.
TWEET: President Donald Trump has labelled many in the mainstream media as FAKE NEWS. Trump says he uses his Twitter account to tweet out the truth about stories which the media twists and lies about him.

TRICK OR TRUMP:
TRICK: Abortion. The Democrat Party is pro-abortion (baby killing) on demand, without restriction, and wants all abortions to be funded by taxpayer dollars.
Trump: Life. President Trump and the Republican Party stand against abortion, to restrict abortions, and are against paying for abortions with taxpayer revenues. 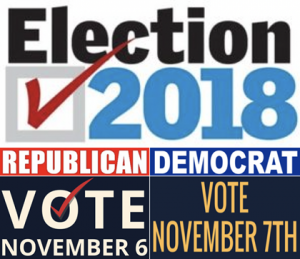 TRICK OR TRUMP:
TRICK: Socialist communism. The Democrat Party is now the party of socialist communism. They believe in and implement government control of private businesses, if the businesses are indeed allowed to remain public (until government takes them over), and government regulation and takeover of businesses that they decide to run (healthcare) or bankrupt and put out of business (coal).
TRUMP: Free market capitalism. Deregulate government control of businesses. President Trump has implemented a policy which states that for every new regulation placed upon private industry, two regulations must be abolished.

TRICK OR TRUMP:
TRICK: Atheism. The Democrat Party has embraced atheism as its core faith and is hostile to all things Judeo-Christian. From time to time Democrats embrace the faith of Islam, not because they believe in Islam, but as the old Islamic proverb goes, so too go the Democrats: “The enemy (Islam) of my enemy (Judeo-Christianity) is my friend.”
TRUMP: God. President Trump believes in openly declaring his faith in the God of the Scriptures and proudly declaring that the united States is “One nation under God.”

TRICK OR TRUMP:
TRICK: Same sex marriage and gender fluidity. Democrats support homosexual marriage and celebrate the U.S. Supreme Court’s approval of it. Since then, they have pushed an even way more radical agenda of gender fluidity, proposing that male and female sexual identity is not fixed at birth, but can be changed according to a person’s desire.
TRUMP: Marriage is between a man and woman and gender identity is defined at birth. The Trump administration wants to define a person’s gender, male or female, at birth.

TRICK OR TRUMP:
TRICK: Anti-gun and anti-NRA. The Democrat Party wants guns restricted and confiscated from American citizens. Every time there is a mass shooting in somewhere, USA, the Democrats propose stricter gun laws, which would serve to disarm lawful gun owning citizens from protecting themselves against law breaking gun wielding, mass-murdering criminals.
TREAT: Pro-gun. President Trump has encouraged more citizens to lawfully possess firearms. Whenever there has been a mass shooting during Trump’s presidency, he rhetorically asks, “Wouldn’t it have been good if someone in that [school, synagogue] had a gun and could have used it to stop the shooter and protect lives?

TRICK OR TRUMP:
TRICK: Higher taxes. The Democrat Party wants to raise taxes on everyone. Higher taxes cause economic stagnation.
TREAT: Lower taxes. President Trump cut personal taxes across the board after being elected. His tax cuts have led to a strong American economy roaring back to life after 8-years of non-growth during the Obama years.

TRICK OR TRUMP:
TRICK: Illegal immigration, open borders. The Democrat Party wants illegal immigrants to be granted full citizenship rights and do not support Trump’s plans to erect a U.S.-Mexican border wall.
TRUMP: Legal immigration, strong borders. President Trump wants the immigration laws of America implemented and has threatened sanctuary cities and states which refuse to comply with the nation’s laws by withholding government funds from them. President Trump has begun construction of the U.S.-Mexican border wall and has deployed troops to the border to prevent a Honduras immigrant invasion.

TRICK OR TRUMP:
TRICK: No voter I.D. laws. Democrats proclaim any law requiring voter identification is tantamount to voter suppression. Without voter I.D. laws however, it seems that there are often many voter irregularities in Democrat districts, such as dead men and illegal immigrant votes being registered.
TRUMP: Voter I.D. laws. President Trump and the Republicans want to end illegal voting at the polls and to do that voters should be required to identify themselves with a government issued identification.