I am a mortal enemy to arbitrary government and unlimited power. I am naturally very jealous for the rights and liberties of my country, and the least encroachment of those invaluable privileges is apt to make my blood boil. — Ben Franklin

It does not take a majority to prevail…but rather an irate, tireless minority, keen on setting brushfires of freedom in the minds of men. – Samuel Adams

Former federal prosecutor, Joe diGenova, law partner and spouse of Victoria Toensing, says the truth is starting to seep out about the Obama Administration’s “brazen plot to exonerate Hillary Clinton” and “frame an incoming president with a false Russian conspiracy that never existed.”  Victoria Toensing is the attorney for the FBI informant related to the Uranium One deal scandal. 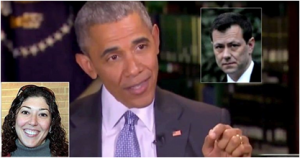 The loathsome FBI traitors Strzok and Page have provided some valuable evidence that Obama lied on national TV and was in fact protecting Clinton and targeting Trump.  In an April 2016 interview, then President Barack Hussein Obama told “Fox News Sunday” host Chris Wallace he could “guarantee” that he had no discussions about or influence over any FBI or Justice Department investigations, including the investigation into former Secretary of State Hillary Clinton’s use of a private email server. “Nobody gets treated differently when it comes to the Justice Department because nobody is above the law.”

Sure … that’s why Congress is looking into malfeasance and political corruption at the Obama-era Department of Justice, FBI, and intelligence agencies. The stench reaches to high heaven.

The latest release of text messages between FBI agent Peter Strzok and his lover, FBI lawyer Lisa Page have raised questions about Obama’s involvement in the Clinton email investigation, Senate investigators told Fox News.  Big questions!  The newly revealed text messages between Strzok and Page include an exchange about preparing talking points for then FBI Director Comey to give to President Obama so he would “know everything we’re doing.” 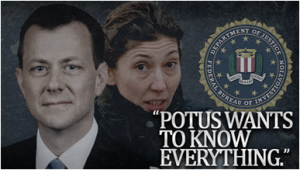 In one of the text messages released by the Senate Homeland Security and Governmental Affairs Committee, Page wrote to Strzok on Sept. 2, 2016: “POTUS wants to know everything we’re doing.” There are even more text messages between the two of them, and on November 14, 2016 Page texted, “We have our task ahead of us.”  Just what task is that and how involved was President Obama?

We’d better get the answers despite the entire disdain of Congress for “sullying” the first half white “black President,” because of his support for Hillary and the destruction of her opposition.

Obviously, President Obama was intensely involved in wanting to know everything about either the Clinton email investigation or the Russia investigation, despite what he told Chris Wallace.  Tom Fitton of Judicial Watch, has laid out some very serious and potentially damaging questions he has about Obama’s involvement in the criminality.

Perkins Coie Law Firm is the counsel of record for the Democratic National Committee, and other political clients including nearly all Democratic members of the United States Congress, as well as several presidential campaigns, including those of John Kerry and Barack Obama.

Robert Bauer became Barack Obama‘s private attorney after Obama was elected to the U.S. Senate in 2004 in the corrupt State of Illinois.  In 2009, President Obama appointed Robert Bauer, the chair of the firm’s Political Law practice, to become his White House Counsel, and in 2011 Bauer returned to private practice with Perkins Coie.

But back to Robert Bauer.  He worked on energy issues for the Jimmy Carter administration in the late 1970s, and has served as counsel to the Democratic Senatorial and Congressional Campaign Committees for many years. He was counsel to Senate Minority Leader Tom Daschle, helping him defend President Bill Clinton against impeachment charges.  He was also counsel to John Kerry’s presidential campaign and went after RepublicanTom DeLay charging him with extortion and money laundering.

In January 2009, when Obama For America (OFA) merged with the Democratic National Committee and became known as Organizing for America, Bauer retained his position as general counsel.  Then during the 2008 presidential campaign, Obama, who had never made his original birth certificate available for public scrutiny, hired Perkins Coie to defend him in court cases challenging his status as a “natural born” U.S. citizen, so he could hold the high office.  According to Federal Election Commission records, OFA paid Perkins Coie $1,352,378.95 for its legal services in those cases.

More than interesting is the fact that while Obama was campaigning against Hillary Clinton, and then Republican opponent McCain, his lawyer quietly wrote letters to station managers and to Asst. AG, John Keeney, contending that Federal Election Commission (FEC) rules forbade the airing of any anti-Obama television ads that would make any mention of Obama’s well-documented association with former Weather Underground terrorist, Bill Ayers.

Bauer filed FEC complaints against groups that were seeking to run such ads, and he intervened on Obama’s behalf to prevent the pro-Hillary, American Leadership Project, from running TV spots exposing the strong support Obama had received from the notoriously corrupt Service Employees International Union (SEIU).

In early 2009 President Obama hired Bauer as legal counsel to represent him in a criminal probe investigating allegations that former Illinois Governor Rod Blagojevich may have sought, with Obama’s (or Rahm Emanuel‘s) knowledge, to sell to the highest bidder the U.S. Senate seat Obama had vacated when he assumed the presidency.  Blagojevich is the fourth Illinois governor to serve time in federal prison, after Otto Kerner Jr., Dan Walker, and George Ryan.

Bauer also worked on issues related to Obama’s ties to Tony Rezko, a corrupt, Chicago-based real-estate developer who was one of the first major financial contributors to Obama’s political campaigns in the 1990s. In 2005, Rezko was facing at least 12 lawsuits and was under federal investigation on charges that he had solicited kickbacks from companies seeking state pension business under his friend, Illinois Governor Rod Blagojevich.  Link

Robert Bauer was also intimately involved in Obama’s controversial decision to break the pledge he had made to accept public funding for his presidential campaign.

Oh, what tangled webs we weave… 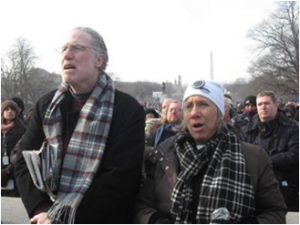 Anita Dunn is the wife of Robert Bauer, and a senior partner at SKDKnickerbocker, a strategic communications firm in Washington, D.C., and a contributor for NBC News/MSNBC/CNBC.  She was Obama’s interim acting Communications Director.

In June of 2009, she delivered a speech to high-school students in Maryland, where she cited Mao Zedong as one of her “favorite political philosophers.”  Mao Zedong, founder of the People’s Republic of China, qualifies as the greatest mass murderer in world history.  Zedong murdered 45 million of his own people, and Anita Dunn lauds him.  God help us, this is the Democrat party today.

Her firm did the ads for Rod Blagojevich in Illinois in 2002 and 2006. In other words, they outright lied to help elect the most corrupt governor in Illinois. Too many Illinois governors end up in prison.

Dunn was also one of the early point people on the destroy Sarah Palin team.

Since April of 2016, former President Obama’s campaign organization paid almost a million dollars to the law firm that hired Fusion GPS to compile a dossier of unsupported allegations against President Donald Trump. The Federalist reports that OFA paid a significant sum of money to Perkins Coie, who was directed by the DNC and Hillary Clinton’s campaign to conduct opposition research on Trump.

Marc Elias, who represented the Clinton campaign and the DNC at Perkins Coie, hired Fusion GPS in April 2016 to dig up damaging information on Trump. And we know Fusion GPS hired former British spy Christopher Steele who then got unverified information about Trump from officials in Russia.

The Obama campaign started pumping money into Perkins Coie while the law firm hired Fusion GPS, so just how much did Obama and his staff know about the origins of and the information contained in the dossier?

Andrew McCarthy notes, it’s a clever arrangement. The use of the law firm adds a layer of deniability, and when controversy arises, Fusion GPS is able to appeal to attorney-client privilege to shield itself from scrutiny. David French “The Russia Dossier Story: A Perfect Storm of Clinton Deception, Media Irresponsibility, and Democratic Moral Blindness.”  Link

At the same time that Hillary’s campaign, OFA, and the DNC were all paying Perkins Coie, Shailagh Murray, spouse of one of Fusion GPS’s key employees, was working directly for Obama in the West Wing.  She was a top communications adviser to Obama while the Obama administration was reportedly using information from the dossier to justify secret surveillance of Trump campaign staff.

Murray is married to Neil King, a former Wall Street Journal reporter who was hired by Fusion GPS in December of 2016. While at the WSJ, King worked alongside Fusion GPS’s core team, even sharing bylines with Glenn Simpson, the Fusion GPS executive who personally hired Steele to probe Trump’s alleged Russia connections.

The Campaign Legal Center, a non-partisan legal group, filed a complaint with the FEC last October 2017, claiming that the Clinton campaign and the DNC broke campaign finance laws because they did not accurately report payments they made related to the Trump dossier, payments that totaled well over $9 million between the two organizations.

FEC records show that Marc Elias, Seattle based Perkins Coie attorney, facilitated the payments to Fusion GPS on behalf of the Clinton campaign and the DNC. Elias previously served as counsel for Obama’s OFA.  While OFA paid a substantial sum of money to Perkins Coie, Clinton’s campaign and the DNC paid much more. Hillary For America paid almost $5.1 million while the DNC paid nearly $5.4 million to the firm.  The Steele dossier was commissioned during this time.

For the record, Elias worked closely with former White House Counsel Robert Bauer, who was also a partner at Perkins-Coie, known for its Democratic Party ties.

The timing and nature of the payments to Perkins Coie by Obama’s official campaign arm raise questions about whether OFA was funding Fusion GPS. Exactly how much did Obama and his team know about the contents and source of the dossier before it was made public? Did the president or his government lieutenants knowingly use a libelous partisan political document to justify official government spying via the Foreign Intelligence Surveillance Act (FISA) court approval targeting political opponents named in the dossier.  Remember that 10 of the 11 FISA court judges were appointed by Obama.

According to the Washington Post, Fusion GPS was first retained by Perkins Coie on behalf of the Democratic National Committee (DNC) and Hillary Clinton’s presidential campaign in April of 2016.

It’s time to see all of these traitors in orange prison garb.