Considered by millions of Americans as the epitome of fake news, MSNBC, allowed its star “national 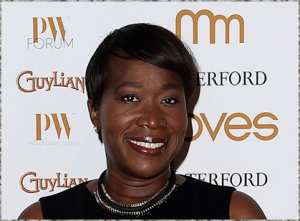 correspondent and cable TV host,” Joy Reid, to report that the international criminal gang MS-13 (Mara Salvatrucha) isn’t a major issue and the only people that have even heard of that criminal syndicate are regular viewers of Fox News.

During the State of the Union address, President Donald Trump elaborated on the need for a new immigration strategy by detailing the horror of two teenage girls who were killed by MS-13, an international crime gang comprised mainly of  immigrants from El Salvador.

“Two precious girls were brutally murdered while walking together in their hometown,” Trump told the audience. “Four men associated with MS-13 have been charged with the killings… I am calling on the Congress to finally close the deadly loopholes that have allowed MS-13, and other criminals, to break into our country.”

However, well before Trump even announced his intention to run for President of the United States, during the Obama administration the Justice Department released a press statement on Tuesday, Nov. 29, 2011 that stated:  “In a hail of gunfire, Mr. Velasquez and his co-conspirators killed and wounded four unarmed individuals – all in the name of MS-13,” said Assistant Attorney General Lanny Breuer. “Senseless acts of violence like those committed by Mr. Velasquez and his fellow gang members are too common across the United States. Through sustained enforcement, we have taken leaders of MS-13 in San Francisco and elsewhere off the streets, and we will continue our efforts to make all our communities safe from violent gangs.”

The evidence presented at trial also showed how the defendants, with others, conspired to commit a variety of crimes to further the goals of the gang, including attacking and killing rival gang members and others who defied or challenged MS-13 , including four murders that occurred in 2008.

The Mara Salvatrucha, or MS13, is perhaps the most notorious street gang in the Western Hemisphere. While it has its origins in the poor, refugee-laden neighborhoods of 1980s Los Angeles, the gang’s reach now extends from Central American nations like El Salvador and through Mexico, the United States

According to an Inside-the-Beltway legal watchdog report on Tuesday, the District of Columbia and its surrounding areas are deluged with illegal aliens gangs that specialize in juvenile sex-trafficking operations. The criminal aliens are benefiting from the city’s “don’t-ask-don’t tell” immigration policies, also known as Sanctuary City policies, currently practiced by area police.

For a number of years violent street gangs, especially the MS-13 or Mara Salvatrucha, have specialized in narcotics-trafficking and the prostitution of minors in the District of Columbia area. Law enforcement officials have confirmed that the majority of the members of the notoriously violent MS-13 are illegal immigrants with active criminal records, most of them Mexican nationals, followed by Salvadorans and Hondurans.

The United States Treasury Department in October 2012 announced that its officials designated the violent and powerful gang MS-13 as a “transnational criminal organization.” MS-13, or Mara Salvatrucha, originated in El Salvador and a large chapter was set up by immigrants, many of them illegal, in Los Angeles and the surrounding areas.

But, according to Judicial Watch, local sanctuary policies — such as those in place in D.C. and the area surrounding it — present the biggest obstacle to combating gang violence and the illicit businesses they operate.

In fact, a 2008 study sanctioned by the Department of Justice (DOJ) confirmed this, explaining that don’t-ask-don’t-tell immigration policies in sanctuary cities shield deportable violent criminals, especially gangbangers, from federal authorities. This study was conducted during the 2008 election cycle.

“This appears to be fueling the underage sex-trafficking business in the metro D.C. area. In recent years the feds have busted a number of rings, but there are countless others in a region where sanctuary policies force cops to operate with one hand tied behind their backs. Just this week a criminal alien pleaded guilty in Alexandria, Va., to recruiting a pregnant teenager to work for a prostitution ring operated by the MS-13 in various parts of the state,” stated officials with Judicial Watch.

In spite of the suffering of young child dragged into participating in gang-operated prostitution rings near the nation’s capital, in November 2011 the Obama administration surreptitiously shutdown a crucial FBI division — National Gang Intelligence Center (NGIC) –dedicated to countering gang violence. This reduction in law enforcement assets came at a time when gang violence in the United States was at an all-time high, according to the government figures compiled by Judicial Watch for its own report.

When the NGIC got the ax, its latest annual gang threat assessment had revealed that gangs are responsible for nearly half of all violent crimes in most parts of the country and up to 90% in many jurisdictions. That’s because there are over 33,000 active gangs in the U.S. with some 1.4 million members, according to the now-defunct NGIC, which was created by Congress in 2005 to help curb the growth of gangs and related criminal activity.

The Federal Bureau of Investigation estimates that there are well over 50,000 members of MS-13 nationwide with the majority of members residing in the U.S. illegally. Originally a gang comprised exclusively of El Salvadorian nationals, Latinos from other countries are now allowed membership.

Since its inception, MS-13 members have warred with rival gang members and sought to extort payments from other criminals in the gang’s territory. After the federal government indicted a large number of local MS-13 members on October 22, 2008, Velasquez assumed leadership on the streets and encouraged the remaining members of the gang to engage in violence in order to demonstrate their continued presence in San Francisco despite its loss in numbers due to the federal indictment.

“In a hail of gunfire, Mr. Velasquez and his co-conspirators killed and wounded four unarmed individuals – all in the name of MS-13,” said Assistant Attorney General Lanny Breuer. “Senseless acts of violence like those committed by Mr. Velasquez and his fellow gang members are too common across the United States. Through sustained enforcement, we have taken leaders of MS-13 in San Francisco and elsewhere off the streets, and we will continue our efforts to make all our communities safe from violent gangs.”

The evidence presented at trial also showed how the defendants, with others, conspired to commit a variety of crimes to further the goals of the gang, including attacking and killing rival gang members and others who defied or challenged MS-13 , including four murders that occurred in 2008.

The prosecution also presented evidence of three separate shootings committed by Herrera, Velasquez and other MS-13 gang members that took place within just two months, after the October 2008 indictment. One of the shootings resulted in the death of Moises Frias, a college student, in February 2009.

Evidence at trial established that on February 19, 2009, Velasquez and Herrera, accompanied by MS-13 member Jaime Balam, a fugitive, went out looking to kill rival gang members in the San Francisco Bay area. Herrera drove Velasquez and Balam in a stolen vehicle, and Velasquez and Balam both carried semi-automatic guns. The evidence at trial showed that in the Excelsior District of San Francisco, Herrera and Velasquez spotted a car of young Latino professionals, including three college students, a student and a business professional. None of the individuals were gang members themselves.

Balam allegedly fired his weapon at the remaining passenger until he ran out of bullets. The victim suffered nine gunshot wounds, including to the head, and was killed. The survivors of the shooting testified at trial that the victim begged for the shooting to stop immediately before he died.

A few days before the shooting, Velasquez and Herrera shot and wounded two individuals in rival gang territory on February 13, 2009. After the February 19, 2009, murder, the evidence showed Velasquez ordered another shooting in which Herrera took part, resulting in the wounding of several victims in rival territory on March 2, 2009. The victims of all the two non-fatal shootings who testified during the trial stated that they were not gang members, but were approached by individuals who exclaimed “La Mara” before shooting them.

Herrera pleaded guilty to seven racketeering related counts, including use of a firearm causing the death of Frias. As part of his plea, Herrera admitted that he was part of the MS-13 hunting party that followed the victims’ car on Februrary 19, 2009, and murdered Frias. The evidence presented at trial before Herrera pleaded guilty showed that he was a member of MS-13 for only two to three months before being arrested.

Hopefully, someone at MSNBC will inform Joy Reid that MS-13 is a threat and that threat must be addressed. Perhaps while cops are investigating MS-13 incidents, the can release a BOLO (Be On the Lookout) for Miss Reid’s brain.