Part 2:  Congress needs to implement solutions, not squabble, not whine, not posture, not rhetoric

We American taxpayers shell out $176,000.00 to $193,000.00 a year to each U.S. House of Representatives and Senate member to work in the interest of America and her citizens.  They swear on the Bible to serve, protect and support the United States Constitution. 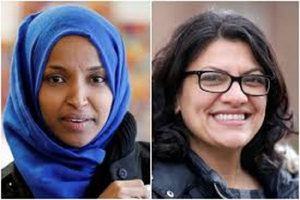 The two new Moslem House members from Michigan and Minnesota, Rashida Tlaib of Palestine and Ihan Omar from Somalia, swore in on the Quran, which mandates its followers to destroy any government and any country that fails to subscribe to Islam.  Therefore, the U.S. House of Representatives features two Moslems bent on destroying our U.S. Constitution.

In fact, Rashida Tlaib, upon becoming a House member, wrapped herself in a Palestinian flag, and told a Moslem crowd that she was going to work to impeach President Trump with, “We’re going to impeach the mother f****r!”

The other Moslem needed to divorce her brother because it’s against American law to marry your brother.  Of course, as a Moslem, she will work to install Sharia Law, so she can remarry him.  Moslems inbreed as a matter of culture. I predict as Moslems grow numbers in our country, we will be battling for our lives, our government and our way of life.  They will continue to create parallels societies encased in Sharia Law.  That ‘law’ provides a daily nightmare for women, animals, children and rational living.  It’s against free thought, gays, couple marriages and just about everything our country and society stands for in this modern world.

And newest dimwit House member, Alexandria Cortez (D-NY), works to turn our country into a socialist country by recognizing the three branches of government: presidency, House and Senate.  If these people remain in our government, and more like them, we most certainly face a doomed future.   IQ counts, and the lower the collective IQ of our leaders and citizens, the faster we degrade into a third world country.

At moment, the U.S. House members doodled and screwed around for so long that they chose a partial shutdown of 800,000 U.S. Government jobs rather than fund a wall at the Mexican border line.  Watching Nancy Pelosi and Chucky Schumer play out their child-like games against nearly a million American workers—illustrates what kind leadership we pay for with our taxes: inept, corrupt, arrogant, duplicistic, child-like tantrums and a complete disregard for the American people.

Solve the problems BEFORE they become critical!

Fact: the majority of those 535 people don’t do their jobs.  If they did, we wouldn’t be in this national disaster on multiple fronts.  I know that my two U.S. Senators Bennet and Gardner lack leadership skills and solutions.  Same with my House member Mr. Perlmutter. They work more for foreign interests than the American people.

What Congress Needs to Accomplish

Because Congress and the last five presidents dithered and dawdled for the past 40 years on immigration, we taxpayers shelled out trillions of dollars for 22 – 25 million people who violated our borders.  They live, work and play at our expense, brought to you by our elected officials.   They undercut our working poor, our taxes, our language and our culture.  They shoplift, drive illegal and steal from us.  They send our money to their countries. They import drugs to addict our kids.  They lie, cheat and steal at every opportunity.  They forge documents and Social Security numbers.  They don’t pay taxes in the world’s largest underground economy.

Worse, all those American employers cheat all of us by hiring them by the millions—just to make more profit.  To hell with fellow Americans and our lives.

How to stop this insanity:  pass E-Verify to force employers to stop hiring this 21st century slave labor force.  Create prohibitive financial and prison consequences so great that even the CEO of Marriott Hotels, McDonald’s, Chipotle, Hormel Foods, Tyson Chicken and every restaurant, construction firm and other entities that knowingly hire illegal aliens—would be forced to hire legal Americans.

Every year, 300,000 pregnant women from all over the world invade our borders to birth their child on our soil.  At some point, some really stupid Federal judge said that the 14th Amendment applied to illegal alien mothers to render instant citizenship to their children.  We pay for it into the trillions of dollars as to K-12 education, books, medical, food and housing.  In reality, that amendment applied to the children of slaves in 1865, not 21st century illegal alien mothers.

We need Congress to amend the 14th Amendment to stop the “anchor baby” loophole.  A pregnant woman must be a citizen of the USA in order for her child to enjoy citizenship.  All others must be deported with their child.  That would stop this “jackpot baby” instant citizenship fraud of the American taxpayer.  Why haven’t the elected officials accomplished this amendment 30 years ago?  That may be the most frustrating question of our time.

Stop the $70 Billion in Drugs Crossing Our Borders Annually

We face an opioid epidemic that has killed over 100,000 Americans. Those drugs cross our borders at $70 billion annually.  We need to shut down the border with a wall, concertina wire, foot soldiers, drones, (possibly landmines or the threat of landmines), cameras placed every quarter mile and the most severe jail time for anyone distributing those drugs to our citizens.  If that means life in prison the first time you’re caught, make a statement that we mean business.

We’ve got so many kids stoned, injected with heroin, meth and cocaine—that America faces becoming a drug-addicted nation.  They’re driving cars stoned, drunk and disoriented.  They’re texting that causes 4,000 deaths annually and drunks cause 15,000 deaths annually on our nation’s roads. The end result: horrible destruction of individuals, families and communities. It’s got to be stopped with the most severe consequences possible.  If they sit in jail, they can’t continue to kill us on the highways.

I’m talking total loss of driving privileges for five years with first drinking-stoned-texting conviction. Loss of car to impoundment and culprit must pay impound fees and automatic $20,000 a year for insurance after return of driver’s license.  Second offense, total loss of driving privileges for life.  If you break that law, you sit in jail for an automatic five years.

If we’re going to move back toward a positive, healthy and thriving civilization, we must take measures that work.