We Live In A Lying, Lustful, Larcenous Fantasy World Of Illusion

Just about every piece of human information we receive in our lives, whether written, verbal, or visual, comes with a hint, or a blatant blast of bias, or an unvarnished lie.  What we think we see and hear is as Jean Iris Murdoch says, is a “fantasy world of illusion.”

The news is not the truth, it is a perversion of the truth, or an outright fabrication wrapped around some kernel of the truth.  In most cases the news comes not only with a hidden bias but a not-so-hidden agenda, usually a political one.

History is not the truth.  History is some person or group of persons’ perception of the truth, colored by individual biases and life experiences and usually based on too little information.  Much of history is so lacking in detail as to render its depiction as nothing more than an outright distortion, or half-truth.  Nevertheless, we accept it as truth and pass it on to others verbally or in writing, even though the conclusions drawn there from are most likely inaccurate at best and maybe totally false at worst.

Take for example three witnesses to a traffic accident.  They will get on the stand in court and swear 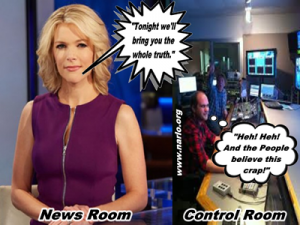 on oath that their version of the truth is the only “true” one, despite the testimony of two other witnesses that tell a totally different account of the accident.  The “truth” might be pieced together by fragments in each of the three testimonies, and then again, maybe not.  Therefore, it can only be concluded that history is an individual perception, or observation of events, not necessarily a factual representation.

Unfortunately, most of us rely on information we obtain from television, radio, newspapers, social media and Internet articles, like this one.  This is supposed to give us an overall picture of what is happening in our local world, our state world, our national world and our international world.  However, all of the rules of individual biases and political agendas apply to each of these sources.  Sifting through the rubble for the truth can be a daunting task, and maybe even an impossible one.

What if a political party, or people with a bias, or an agenda, takes over and controls all sources of information?  The truth we hope to gain then is permanently tainted by that bias or agenda.  Truth becomes the first casualty. The purpose of the controllers is to manipulate the behavior of the people through the biased information they provide, to lead the people in a direction the controllers desire, not unlike puppets on a string.

Let’s say the controllers want to drum up an issue that sheds a negative light on a political target, perhaps a President.  If the controllers control all the sources of information, the job of manipulating human behavior and thought becomes extremely easy.

But instead let’s say that the controllers want to project a political ideology to the consumers of the information they control and that political ideology is portrayed in all of the information sources, day, after day, after day, month in and month out and year in and year out, for decades.  The outcome is that every piece of information is permanently tainted by that ideology and influences generation, after generation, after generation.  An entire nation can be swayed one way or another with this much control over information sources.  For over 100 years America has been “swayed” to accept the Progressive ideology by constant repetition of the Progressive message.  The Progressives must have had fits of euphoria when the Internet and social media came along that expanded their disinformation venues.

As it stands right now and has been for several generations, the Progressive ideology (Socialism) has so colored our reality, it has become the only “true” reality to millions of Americans, in spite of that alleged “true” reality being hopelessly lop sided and in direct conflict with the principles of individual liberty, self-reliance and constitutional unalienable rights.   The Progressive ideology has been institutionalized, infused and forever lodged into the very fabric of our existence.  It could take generations of re-training to alter the belief in the ideology, or a natural or man-made cataclysmic event.

The preponderance of the population (mostly urban dwellers) now perceive the Progressive reality to be the only truth and all other realities can therefore not be true.  Those that believe in this way are so convinced they are right and all others are wrong, that they will go to extremes, including lying, cheating, stealing, oppression and violence to convince others.  Maintaining their political power, by any means, is paramount and that includes packing the Supreme Court with Progressives, (when they can) electing socialists to political office, or opening the floodgates to massive illegal immigration for votes.  They’ve said as much.

To give you an idea on just how powerful they are, they (the Progressives that control almost all of your sources of information) took a non-issue of illegal alien children being separated from their parents at the border as one of the greatest emotional injustices of all times, even though the practice had been going on under previous administrations.  Through their incessant broadcasting of doctored images and imaginary torture of these poor little “innocent” children, they were able to whip a huge segment of the population into a feeding frenzy to the point of losing all semblance of common sense or rational thought.  This led to massive protests and herds of the non-thinking to call for the elimination of Immigration and Customs Enforcement (ICE).  Democrats across America, probably to their political detriment, have championed the idea.

Not once did these irrational ignoramuses, heavily influenced by a dishonest media, give any thought that it is illegal to enter the United States by crossing our borders at other than ports of entry, with or without children.  Evidently their prevailing thought is “to let them all in“, their hope being that maybe one day, when all illegal aliens are given amnesty, they will vote Progressive in large numbers.  They are right of course.

Not once did they consider the cost to legal American taxpayers to feed, house, educate and medically care for these tens of thousands (now millions) of illegal aliens (adults and children) that have broken our laws by sneaking into America.

Not once did they give any thought to the lost jobs for legal Americans, the dampening of wages and the diseases and drugs these un-educated aliens bring with them.

Not once have these “let them all in” miscreants ever thought what is happening to American culture by the infusion of millions of non-English speaking, non-assimilating, uneducated peasants with little to no skills and little way to support themselves, other than by very low wage work, government welfare, or by crime.

What is even worse, these controllers of your information (Progressives) camouflage their emotionally charged broadcasts and newsprint with lies, distortions and massive propaganda, or the omission of competing or contrary information.  Try to find an opposition article to man-caused global warming in the mainstream media.  You won’t.  Dissent is demonized.

It doesn’t matter which pet Progressive issue they are promoting at any given time.  Whether it is man-caused global warming, illegal immigration, health care, education, the economy, wages, trade, commerce, abortion, gay rights, or any other social or environmental issue they champion, it is all dressed up in gloom, doom, disaster and devastation if we don’t all act in concert with their agenda and support their mandated actions.  To not comply with them is tantamount to subversion and insurrection, or even treason.  Facts are irrelevant and only their agenda matters.  Alarmingly, their actions and behavior are disturbingly reminiscent of the three major planks of the Nazi Party:

The state is born out of the necessity of ORDERING the community of the Volk (people) in accordance with certain laws. Its characteristic attribute is power over every branch of the community. The state has the right to demand of every racial comrade [Volksgenosse] that he live according to the law. Whoever violates the laws of the state will be punished. The state has officials to execute its laws and regulations. The constitution of the state is the basis for its legislation. The state embodies power! In the state men of different opinions and different outlook can live beside each other. The state cannot demand that all men be of the same opinion. It can, however, demand that all men observe its laws.   (whether constitutional or not)

In contrast to the state, the party is the community of men of like opinion. It is born out of the struggle for an ideology. In order to survive this struggle, it gathered together all men who were prepared to fight for this ideology. The ideology is the basis of the order in accordance with which men live within the party. While in the state laws are considered as pressure, obstacles, and difficulties by many citizens, the laws of the party are no burden but rather signify the will of the community. In the state the characteristic is the must; in the party, “the I will.”

III. The Functions of the Party and the State

(a) It is conceivable that party and state are one and the same thing. This is the case when all racial comrades are converted to the ideology of the party and the laws of the state are the clear expression of the will of the ideology. Then the state becomes the great community of men of like opinion. (Lemmings – Robots!) This ideal situation will only seldom be attained in history. It is, in fact, only conceivable if this ideology is the only basis for the inner attitude and takes complete possession of the people….

The words “Progressive”, “liberal”, “left”, or “Democrat” have now become indistinguishable from the word Socialist.  Socialism is incompatible with free thought, free choice, or individual rights and is a political system that dies violently when it runs out of the money a socialist government extorts by force from those people that produce goods, services and the wealth of a country.

It is this intransigent constitutionally blind Progressive collectivist disease (the “SYSTEM“), taken from a violent European past and void of free, individual thought and free choice, that has caused Americans to now “Live In A Lying, Lustful, Larcenous Fantasy World of Illusion.”  Either kill the disease, or become compliant robots to their dictatorial, all-enslaving, unconstitutional power.

So what are CONSERVATIVES going to do about it?  It may be too late to stop it.