Home/March 2021, Opinions/Welcome To The Final End Of The Green New Deal

Welcome To The Final End Of The Green New Deal

“Only a virtuous people are capable of freedom.  As nations become more corrupt and vicious, they have more need of masters.”  —Benjamin Franklin

Jeremy huddled in a corner of the old log cabin, out of the wind, even though it blew through the cracks in the walls and whistled and moaned with a haunting, bone-chilling sound.  The sky was dark, gray and menacing.  The coming twilight filled him with dread.   There would be no artificial light for the approaching darkness and he tried not to think of the long night ahead.

His current dwelling was once a small cabin complete with solar panels.  But the ravages of time, the sun, the wind and the rain had taken their toll on the aging building and it was but a few years from total collapse.  The cabin creaked under the strain of the wind. 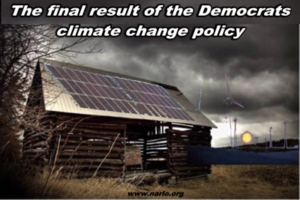 The solar panels on the roof ceased to function long ago, crusted over with rain-caked dust.  The electric wires to the cabin had long since blown to the ground by the incessant wind.  But alas, it was of little consequence because the massive generators that once brought electricity to the most powerful nation on earth, had fallen silent.  The radical environmentalists and the socialists of the early twenty-first century had their way and sent us back to the dark ages.

Government-instituted, insane cap and trade policies to drop CO2 levels in order to stop or slow down the non-existent problem of man-caused global warming.  Prices for everything went through the roof and millions of businesses went out of business and the jobs went with them.  The nations unemployment rate had risen to over 45% and has stayed there since 2031, because the Obama and the Biden administrations borrowed our children’s and grand children’s future to the point that the minute a child was born, he or she owed over $150,000 in debt to the federal government, which could never be paid.  Taxes on income were at 90% with no deductions, but the producers and wealthy had fled the country in a massive brain drain years ago.

Government-manufactured racism, Climate Change and the Coronavirus, disrupted society so bad as to change it forever for the worse.  Government seized upon the Coronavirus to expand its powers well beyond the 17 enumerated powers contained in the Constitution.  Once the precedent was set, once the extra power was grabbed, there was no going back.  Freedom, liberty and property rights all but evaporated. (See: “BLM, Covid-19 and Climate Change, 3 Great International Cons”)

The gross negligence, corruption and cost of too many social programs finally came home to roost.  Social Security, Medicare, Medicaid, welfare and the national health care system called Obama Care established in 2010, went completely broke by 2024.  Doctors and nurses, that once occupied our fine hospitals and clinics, could no longer dispense health care by the mere fact that all of their time was expended in just taking care of themselves and their families, as best they could.  Everyone else was left to their own resources.

To make matters worse, because of radical, international environmental policies, other countries started hording their own resources for their own people and shut off oil, coal, natural gas, materials and food shipments to anywhere in the world.  International trade dwindled to a trickle and piracy accelerated on the open seas on those ships that dared to sail.

The United Nations had taken control of the world in 2032 but nothing the UN did, had any affect on the rising chaos.  Border, resource and religion wars broke out constantly.  China had become the world economic and military power in the late 2020’s but it too decayed into internal conflicts, rampant hunger and strife.

Our own oil, coal and natural gas resources had been shut off by the environmentalists and the Biden administration, as the nation tried to move exclusively to wind and solar power.  The entire energy infrastructure had fallen into disrepair.  Oil, gas and coal companies had shut their doors because of too many restrictions and exorbitant emission taxes.  Gas for a car simply evaporated.

The wind and solar power that Biden promised that would replace fossil fuels, was just one of his worthless, but very expensive pipe dreams, like so many other socialist and radical environmental policies he implemented.

Power plants quit running for lack of transportation, energy resources and maintenance personnel.  The power grid was ravaged by neglect, natural forces and frequent domestic and foreign terrorist attacks.  But it didn’t matter.  There was no power to distribute to the grid.

Food was in short supply and rationed.  Inflation was so rampant from government over-spending and borrowing back in the first, second and third decades of the twenty-first century, that it took over $1,000,000 to buy a loaf of bread.  Most banks had gone under, forcing Americans into the barter system, where they could.

Gold had shot up to over $25,000 an ounce, but it could not be found as most of it had been bought up years ago and horded.  Crime accelerated as hungry bellies resorted to stealing or killing, just to stay alive.  Murder was an every-day occurrence as anger, fear, resentment, frustration and jealousy overwhelmed the minds of most Americans, because government corruption and mismanagement had broken the back of the most powerful nation on earth.

In the once-great cities of America, dead bodies littered the streets with no one to dispose of them.  The stench from decaying bodies and rotting garbage was unbearable.   Rats, disease and famine were everywhere.  Tens of thousands died every day.  Cities looked like war zones and they were.  The only relief was escaping to the rural areas, if one could.

The nation’s farmers had let their fields go fallow, creating dust bowls of the great plains, ending in an unprecedented drought that has lasted for almost 30 years, with no signs of letting up.  Massive dust storms that swept across the plains were almost a daily occurrence.

……. Jeremy looked out the broken window at the setting sun as it highlighted the wind turbines in the distance, but their bearings had frozen from neglect and even with a hurricane-force wind, the propellers refused to budge.  Many of the blades had broken off and had fallen to the ground, lying there like bleached-out bones in an old elephant graveyard, as a criminal legacy to one more failed government policy.

At 39, he was thin and emaciated from trying to carve out a living in the wilderness.  His clothes were tattered and torn but he would be hard pressed to find new or even used clothes, where he was.  Soon he would be forced to don the skin of a large animal, if he had the energy and the where-with-all to find, kill and skin one.

He drank from the scarce moisture in ever-shrinking puddles of rapidly evaporating, infrequent rainwater.  He had spent this day looking for food, dining on what grub he could find in broken logs, when he broke out of the trees and saw the cabin.  The cabin was the first shelter he had found in days.   He was surprised to find the cabin empty.

He had escaped the big city because there was nothing but starvation, death and destruction there.   He lost his wife and two children to murder.  Heavily armed, roving gangs ran wild in the streets, day and night and killed, pillaged, plundered and robbed whatever or wherever they wanted.  The nights were the worst and were nothing short of anarchy and chaos.  The days were just slightly better, but going out on the street at any time could result in being severely beaten and robbed, or bring an end to your life in a fraction of a second.   Police were nowhere to be found because the danger was too great and the government had no money to pay them.

The American people were broke and the government was broke.  The government had been forced to trade American soil in exchange for defaulted loans to foreign countries, who had called in their debt to the U. S.  Much of America had been exchanged for that debt.  It was not uncommon to run into foreign soldiers if one accidentally strayed onto land now owned by China, Japan, or even Russia.

Sovereignty, individual rights and the constitution had died sometime during Biden’s 4-year reign of terror.  At one point he declared martial law, suspended the Constitution and tightened his grip on power.  But it didn’t last.  After Biden was driven from office by an outraged electorate and a Congress that finally regained its courage, he, his wife and his children escaped to China, fearing for their very lives in America.  The Chinese welcomed them as old friends.

But it was too late for America.  Irreversible damage had been done and there was no going back.  America, as a once, all-powerful Constitutional Republic, lay fractured and in tatters, a victim of the Biden and the socialist ideology that taken over in 2021.

Jeremy longed for other company but he couldn’t take the chance because he could trust no one.  If he saw someone in his travels he avoided them at all costs.   His future was bleak and short.  He was not sure how long he could survive living as he was.  Many days he thought about ending it, because of the futility of it all.

He thought back to the days when America was strong and vibrant and picked up a piece of wood and threw it at the wall of the cabin in a fit of anger at what Biden and our leaders had done to this great country and what the American people had allowed to happen by not peacefully settling their own differences and holding those leaders accountable to our Constitution and the founding principles of freedom and liberty.

It was dark now and Jeremy tried to go to sleep, as the cold and wind howled insults at his frail and shivering body.  He dreamed of a time when people were actually happy, everyone had plenty of food on the table, money in the bank, homes to live in and cars to drive.  His dream was shattered as a board fell with a crash from the ceiling, knocked loose by the wind shaking the cabin.

The year was 2051 and a new day would not bring any relief to Jeremy’s misery.  Because you see, Jeremy was just one of the tens millions of hapless victims of the failed and tortured years of the Biden Kingdom, a time in America’s history where the people fell prey to the siren call of “free stuff” and finally discovered too late that it wasn’t free after all.  The end result was totally predictable, but it was also preventable, if only the people had been more virtuous, determined and courageous in defeating the rise of socialism and the Green New Deal.