Home/May 2021, Opinions/We’re In A Battle For Freedom. Where’s The War?

We’re In A Battle For Freedom. Where’s The War?

“The receptivity of the masses is very limited, their intelligence is small, but their power of forgetting is enormous. In consequence of these facts, all effective propaganda must be limited to a very few points and must harp on these in slogans until the last member of the public understands what you want him to understand by your slogan.”  —Adolf Hitler

Many experiments have been done with animals to determine their behavior in certain situations, or for some nefarious reasons to modify their behavior.  The primates are the behavioral scientist’s or social psychologist’s favorite subjects because they more closely represent their nearest human cousins.  The usual process is for the researchers to provide a stimulus to the subject animal and record the response.  The stimulus can be either a punitive action, or a reward action.

One of the more famous experiments with primates was the Monkey and Banana conditioning exercise.  The scientists put five monkeys in a cage with a very tall ladder and a bunch of bananas on the top of the ladder.  Eventually, one of the monkeys would venture to climb the ladder to reach the bananas.  But they had a surprise waiting for them.  They were sprayed with a powerful stream of water and driven off the ladder before they could get to the bananas.  The experimenter then proceeds to spray the other four monkeys in a similar manner. 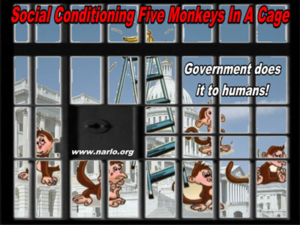 Sitting there, wet and cold, the monkeys huddle and move about until another monkey is drawn to the bananas and starts to climb the ladder.  The experimenter drives the second monkey off the ladder with a powerful stream of water and then turns the hose on the other four monkeys.

When a third monkey starts to climb the ladder to reach the bananas, the other four monkeys pull him off and beat him so as to avoid being sprayed by the water again.

The experimenter then replaces one of the monkeys with a new monkey.  When the new monkey goes after the bananas, the other four monkeys pull him off and beat him as well.

Once again, the experimenter removes one of the other original monkeys and replaces it with a new monkey.  When the new monkey starts to climb the ladder the other four pull him off as before and beat him, including the monkey that had never been sprayed.  By the end of the experiment, all of the monkeys were new and none of the original monkeys were left.  And yet, despite none of the new monkeys ever experiencing the cold, wet, spray, they had all learned never to try and go for the bananas.  That is social conditioning.

Now replace the bananas with FREEDOM!  As you attempt to climb the ladder to freedom you are being sprayed by a tyrannical government with a toxic mixture of lies and propaganda so you can never reach it.  Cancel culture, censorship and the attack on free speech are a part of this toxic mixture.  In addition, government is exploiting the public education system, including K-12 and college, to brainwash multiple generations.  (See: “To Kill A Free Nation Take Over Public Education”)

Using lies, propaganda and social conditioning, governments “manipulate” their citizens regularly to control the behavior of the masses for a government-desired outcome.  Since humans tend to move as one, like a flock of birds in the sky, or a school of fish in the sea as far as social norms are concerned, the monkey-banana experiment proves how easily it is to “manipulate” animals and make even a human behavioral change permanent.

Since the late 1920’s and early 30’s the American government has been working diligently to control citizen behavior under the highly subjective alleged science known as social psychology.  These earlier experiments on social engineering and modifying human behavior were conducted by the University of Chicago and Harvard University and funded by the Rockefeller Foundation.  “In a final report of the 1938 Harvard Laboratory of Industrial Psychology showed conclusively that they had been successful in influencing employees’ subconscious attitudes about their jobs with this new science.  Their approach was a form of thought-control which they felt Americans would accept.”  (Source:  “Politics of Change by Dr. Robert N. Crittenden)  In point of fact, Americans had no idea how they were being manipulated and they had no say in the science or the methods being used to control their thoughts.  How is this any different than Nazi Joseph Goebbels’ propaganda machine to manipulate the German people leading up to and during the Second World War?  It isn’t.

The American government has been lying to the American people for a very long time about a wide range of important subjects that affect our every day lives.  Now, with the help of academia, social media and the news media, the “woke” government under socialist Democrats, RINO Republicans and our massive bureaucracy has been lying to and propagandizing citizens in many different fields, from economics, to education, to climate change, to environmentalism, to junk science, to health care, to speech, to gun rights, to vaccines, to masks, to immigration, to trillions in deficit spending and printing money, to racism, to foreign policy, to military and domestic intelligence and God knows what else.  Climate change is propaganda.  Critical Race Theory is propaganda.  Social justice, inclusiveness, equity, white privilege and systemic racism are all propaganda, designed by government and special interests to “manipulate” citizen behavior, just like the above described five-monkey experiment.

Our federal institutions, like the FBI, the DOJ and the CIA have been hopelessly corrupted and acting virtually without constraint or accountability.   Even large and small corporations and unions are parroting this “woke” ideology, spawned over 100 years, out of the loins of Progressivism.  Progressivism is just another word for socialism.

Due to Democrat President’s Wilson, FDR, Johnson, Clinton, Obama and Biden’s socialist policies, freedom has lost its remaining sanctuaries in our Declaration of Independence and our Constitution.  The war on freedom by these administrations include FDR’s New Deal, Johnson’s Great Society, Clinton’s President’s Council on Sustainable Development, Obama’s Obama Care and now Biden’s march towards absolute socialism with massive government multi-trillion dollar federal assistance programs.  Biden’s open borders, to packing the Supreme Court, to repealing the Senate filibuster rule, to adding Democrat-run states to the 50 states, to racism and to health care are all designed to make American citizens dependent on the government and increase Democrat political power.  Through lies and propaganda, government and special interests have divided and conquered us without a shot being fire.  So where is the war?

Government today and probably throughout history, due to human failings, has been, is and always will be about “power”, but very seldom about “principle”.  However, if we choose to avoid principle, we do so at our own peril.  Many governments have fallen for far less.  This great land of ours could easily share the same fate unless we return to these principles, for which millions of brave men and women have sacrificed their lives, their limbs and their minds to defend.  (See:  “18 Basic Principles For America”)

But WE THE PEOPLE in the form of individuals and families have the ultimate power, if we will only exercise that power.  We must act as one in the defense of our unalienable rights as granted to us by our creator and instituted into law by men under our Constitution and further by living up to our civic duties, obligations and individual responsibilities.  But if we are divided, if we fight amongst ourselves, if we allow ourselves to be bought off by the promises of government largess to buy our votes, that always comes with a loss of freedom.  If we ignore America’s time-tested constitutional principles, we are rendered impotent and the “powerful” elite, ruling class will fill the gap, as they already have ….. because we let them.

Ladies and gentlemen, this socialist Democrat American government has become the enemy of a free people, an instrument to relieve us of our liberty and spend us into debt oblivion.  We are, so far, in a limited and peaceful battle for freedom.  But the vicious and relentless attack on our individual liberties and national sovereignty by socialist Democrats, radical environmentalists and globalists, forces us to ask, “Where is the war?”  Why haven’t Americans been issuing “The Mandate” to their Senators and Representatives?  When will they fight back against the toxic mixture of lies and propaganda and climb the ladder to freedom?

After over 100 years of moving away from freedom under Progressivism, we are truly at a crossroads and the fate of our cherished America could go either way.  But “just one act of courage” by just one person, might very well make the difference between freedom and perpetual enslavement.

On the battlefield, one man, risking everything, motivated by powerful emotions of unbridled anger, or blind rage over something that happened to one of his buddies, will attack the enemy single handedly, from whence heroes are born.  In many cases, that single act of courage incites others to follow him, from whence wars are won.

If you stand up, you could be the “butterfly” that “flaps its wings” in Arizona and starts an uprising in Michigan.  In chaos theory, the butterfly effect is the idea that small things can have huge non-linear impacts on a complex system.  The concept is imagined with a butterfly flapping its wings in Guiana and causing a typhoon in the Western Pacific.

The seeds of freedom have already been sewn by many single acts of courage and the “butterflies” are poised to take wing.  Others, less courageous and sitting on the sidelines, are waiting for you to make the first move.

The aristocrats, criminals and the anarchists have taken over while tens of millions of Americans watched and did nothing.  Social Democrats have drawn the battle lines and more.  “Where, for Pete’s sake, is the frickin’ War?”

“A tribute to our nation’s Mothers”

To all you mothers out there
In this great land of the free,
We stand in awe for the gifts you give
To America’s cultural family.

Love, caring, nurturing and more,
You give of your self so unselfishly.
The kids are crying on the kitchen floor
But you keep your cool
In a voice that reaches out so tenderly.

You are what you are
And we take you that way.
No you’re not perfect
You can’t always be on every day.

But we pay you this tribute
On this yearly Mother’s day,
To show you we haven’t forgotten
How special you are in every way.