Home/July 2020, Opinions/When The Bullets of Freedom Ring, America Will Be Saved

When The Bullets of Freedom Ring, America Will Be Saved

“A plant rises up out of the moist, rich soil from a tiny seed no bigger than a few grains of sand.  Its journey through life is preordained.  It cannot sway from the goal set for it by its genetics, chemistry and biology.  Somewhere along the way a bud forms on the end of a stalk or tendril of the plant and in but a few days, erupts into a splendor of color and a soft, enticing shape; each plant having its own unique form and color.  In contrast, humans are far different than the plant, even though they too come from a seed.  Humans possess what all plants and most, if not all animals, do not possess.  Humans have pre-programmed into them volition, free choice, an ego, an id, a will to determine their own direction, their own future and their own environment.  The unlimited expression of those qualities, within reason, is freedom.”  —Ron Ewart

But alas, life in America is not free of local risks like crime and violence and it is definitely not free of government regulations, tyranny, or corruption. 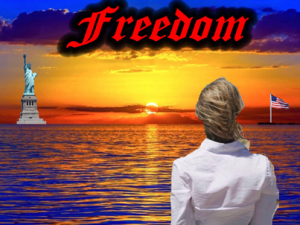 The level of interference in our daily lives by government and special interests has grown exponentially since the signing of the Declaration of Independence in 1776.  In 244 years the government of this nation of laws, has irrevocably perverted and distorted the “rule of law” by passing laws to the point of absurdity, if not insanity.  Our God-given natural freedoms have been so eroded by too many laws as to make constitutional freedoms unrecognizable.  At the current rate of erosion the rest of those natural rights will be usurped and repealed in the next few decades.

If the socialist Democrats gain power and have their way, the Constitution and the “rule of law” will become obsolete and meaningless.  Eventually, the “rule of law” will become the rule of a small cadre of powerful men and women and the elite will finally rule the earth through a world government.  America’s sovereignty will be dissolved and its principles of freedom repealed.  The people will be but indentured debt servants, in a land ruled by aristocrats and oligarchs, or even worse, the United Nations, or a dictator.

That is the future that awaits us, if we do nothing, a prediction we chronicled in our article entitled, “Back To The Future, The Obama Legacy.”  It is a chilling portrayal of things to come in the year 2051.

The sad reality is, the socialist Democrats have been very successful in brainwashing at least the last three generations with the socialist mantra in our public schools and colleges and getting them to believe that America is a flawed country and is to be berated and vilified, not celebrated as an exceptional nation.  The latest attack on America and Americans using Blacks as victims of alleged White racism, White Privilege, or White Supremacy, has hopelessly divided our nation and elevated a racial falsehood to a national tragedy and an alleged civil rights injustice where none exists.

This is the socialist Democrat’s ultimate propaganda to gain perpetual political power by any means and render conservative thought and ideology and Constitutional protections irrelevant.  Once again, they pit us against each other for their own gain and exploit the lives of Blacks to do it.  When will the Black race finally realize that Democrats don’t care one whit about Blacks, they only care that Blacks will vote as a block for Democrats.  Blacks have been bought off by Democrats, hook, line and sinker, using taxpayer’s money.  Free health care, free college tuition and forgiveness of college debt are just more tools in the Democrat play book to buy off more Americans.

Make no mistake, they (socialist Democrats) are coming for your free speech ….. and your guns.  They are tearing down the core foundations of our society, the nuclear family, religious freedom and your property rights.  They are trying to do away with the single family home and a yard and replace them with high-rise concrete and steel apartments in the name of smart growth and sustainable development, both UN Agenda 21 policies, policies that were never ratified by the U. S. Congress.

They want to take you out of your cars and force you into mass transit.  They are trying to take away your energy by attempting to replace fossil fuels with alternative energy, (wind, solar power and bio-fuels) not only exorbitantly costly at worst, but a pipe dream and just plain stupid at best.  They won’t allow clean nuclear or hydro-power to be built for alleged environmental reasons.  They want to drive all rural people into big cities so they can better control them and leave the rural areas for plants and animals.  They have replaced honorable government with graft, corruption, double-dealing, greed and racketeering.  Why do you suppose that the five riches counties in America surround Washington, DC?

If you are looking for the preservation or an expansion of individual freedoms in your, or your children’s future, you are blind to reality and betting on the wrong horse.  This horse cheats, lies and steals and has no compunction about breaking the law.

For several decades we have tried the peaceful approach to restore our Constitutional Republic.  But the simple truth is, the stupid and ignorant ones have the majority of the votes (mostly from corrupt big cities) and conservatism is short of votes and up against an immovable object, the coming dawn of American socialism.  Just how are you going to stop it if you don’t have the votes?

You can’t count on the Republicans to save you.  Most Republicans are in the tank to the establishment and will not rock their own boats.  Why do you suppose the Republicans have not come out in unison and denounced the current Black Lives Matter and ANTIFA violence?  Their silence says it all.

There is only one remaining and final solution to preserve the Republic: them’s with the guns, en masse, take control of the government institutions, including public schools and colleges, and lay down the law, constitutional law.  We call this solution, the “Bullets of Freedom” and we offer this solution with a heavy heart.  Millions of Americans know what we say here is true.  Half measures will only insure defeat, as the government will move to quash an inferior force.  Only a full court press has any chance of success.  That means that tens of millions of Americans would have to get involved.  That appears unlikely.

But if it could happen, who will lead the “Bullets of Freedom?”  How will it be organized and funded?  Who will be the soldiers?  What strategy or plan of attack will be used to achieve its worthy goals to restore freedom?  Could “Encirclement” play a part?

Or, is there no viable solution?  Has America come too far to ever turn back?  Can our growing society survive without heavy restrictions on its freedom (socialism) so that it doesn’t unravel in chaos and violence, as it seems to be doing right now?  Are the divisions too great to heal?

What we do know is this.  America is reaching a boiling point in its long life.  It is not the first, but seems to be the worst.  The tension is very high.  The bonds that held us together are coming unglued. Congress could fix it, but they won’t.  The news media could quit fanning the racial flames, but they won’t.  Trump can only try, but without a unified Congress, he is impotent.  As a result of the unpredictable virus and the failing economy, he may lose anyway.

How long can America endure before the boiling point erupts in all out warfare under the “Bullets of Freedom?”  Or, will a one someone, or a few someone’s, turn off the burner under the boiling pot?  Will, in the end, cooler heads prevail?  So far it would seem not, leaving the one and only remaining option left!