Skip to content
Home/October 2018, Opinions/Where Are The Normal, Reasonable And Prudent People?

Where Are The Normal, Reasonable And Prudent People?

So what is a normal, reasonable and prudent person?  The US Legal website describes it as follows:

“Reasonable or Prudent man is a hypothetical person used as a legal standard especially to determine whether someone acted with negligence.  This hypothetical person exercises average care, skill, and judgment in conduct that society requires of its members for the protection of their own and of others’ interests.  The conduct of the reasonable man serves as a comparative standard for determining liability.  For example, the decision whether an accused is guilty of a given offense might involve the application of an objective test in which the conduct of the accused is compared to that of a reasonable person under similar circumstances.”

“Reasonable man is a term commonly used in tort and criminal law.  The Laws of England place great weight on the Reasonable Man.  This may be due to the fact that it is not possible to specify exactly what ought to be done in all circumstances, and therefore it is phrased in terms of what a reasonable man would do in a given set of circumstances.  This standard is used to judge the conduct of an ordinary person only. Usually persons with greater than average skills, or with special duties to society, are held to a higher standard of care.  For example, a physician who aids a person in distress is held to a higher standard of care than is an ordinary person.”

It becomes abundantly clear in law that those persons with a highly specific skill, like a physician, or a 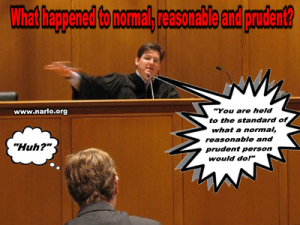 lawyer, or a judge, or those that hold power over others like politicians or bureaucrats, are held to a higher standard of “normal”, “reasonable” and “prudent”, than that of the common man.  A physician can hold the power of life or death over a patient, or an accident victim, and by logic has an extra duty to exercise the utmost care, in keeping with his training and experience.  If not and bodily injury or death occurs, he or she could be guilty of negligence, gross negligence, or extreme negligence.

Gross negligence is defined as: “carelessness which is in reckless disregard for the safety or lives of others, and is so great it appears to be a conscious violation of other people’s rights to safety.  It is more than simple inadvertence, but it is just shy of being intentionally evil.  If one has borrowed or contracted to take care of another’s property, then gross negligence is the failure to actively take the care one would of his/her own property.”

(Remember, Hillary Clinton was guilty of “gross negligence” in her handling of her “Secretary of State” e-mail account, but because of politics was never charged with the crime.  Clinton had an “extra” duty, as an individual with power over others and a keeper of national secrets, whether with good intent, bad intent, or no intent, to exercise extreme care in the handling of classified material, which she did not.  She should be in jail as any other person would be that committed similar acts.)

Common Sense is defined as having “good sense” and “sound judgment” in practical matters.

If human beings do not exercise normal, reasonable and prudent behavior throughout the majority of the population; it they do not exhibit good sense and sound judgment; if they are not honorable, then self government is a condition that can never be reached in the human experience.  It is a pipe dream, a mirage and an unattainable goal because human beings are systemically weak and incapable of governing themselves under a flag of freedom, both the governors and the people alike.  If these characteristics are not prevalent in the masses, then absolute power by the governors is the end result.  We’re much closer than you think!

In the last several years (if not decades) honor, sound judgment and normal, reasonable and prudent behavior are sorely lacking in government and in the body politic as well, but even more so in the representatives that have the responsibility to govern the rest of us.  The unseemly spectacle that is the current advise and consent role of the Senate in the confirmation of Brett Kavanaugh for U. S. Supreme court justice, is not about normal, reasonable and prudent behavior or honor, by those that should know better and be held to a higher standard, but it is more about blatant, in-your-face, raw power by any means, including lying, cheating and withholding evidence.

Like millions of Americans we are ticked off with the Republicans that can never seem to get their act together and Democrats that lust for power so bad that they will violate every known attribute of decency, law, or rule.  We have had to turn the TV off for fear of putting a speeding bullet through the screen.  Yes, that is how angry we have become.  But anger accomplishes nothing unless it is the motivation to act logically, reasonably, forcibly and with the power of intellect.

WHEN ARE THE PEOPLE GOING TO GET IT THROUGH THEIR HEADS THAT THEY CAN’T CHANGE THE “SYSTEM” WITH THEIR VOTE!  (See: “The System – Impenetrable, Inflexible and Un-yielding“)

The inability of the U. S. Government to get a handle on illegal immigration is anything but normal, reasonable and prudent.  In fact, it is gross negligence that should be punishable by indictment, prosecution and incarceration for the perpetrators.  Unfortunately, that would mean deporting all illegal aliens and sending the entire Congress and the 2,000,000 plus government bureaucrats to jail for gross negligence, racketeering and corruption in order to restore normal, reasonable and prudent and the rule of law.

If this picture of throwing every politician and bureaucrat in jail begins to sink in, you may begin to realize that we need to re-start the American experiment with freedom all over again, with new players whose rock solid foundation begins and ends with honor, honesty, integrity and common sense.  The “Establishment” and the “Deep State” must be torn asunder if freedom is to prevail.

The gross negligence of government politicians and bureaucrats doesn’t stop with illegal immigration and the Senate confirmation process.  It continues on into the institutionalized corruption of public and higher education, health care, welfare, radical environmentalism, the IRS, the DOJ, the FBI, the BLM, the EPA and any number of other government agencies, local, state, and federal, that have disconnected themselves from the foundation of our freedoms and the U. S. Constitution.

The absolute regulatory control of humans by government has become a greater priority, especially for Progressives, than the protection of constitutional, individual rights.  That constitutional protection of our unalienable rights by government, on both sides of the political aisle, was and is their solemn duty and mandate.  However, in the name of power by any means, that mandate has been purposely shirked by those that have the solemn duty to represent the people.  This evolving political power turns the people into nothing but exploited pawns, just as Dr. Christine Ford was exploited for raw power purposes by the Democrats to destroy the life and reputation of a good man (Brett Cavanaugh) who has always exhibited honor and exercised normal, reasonable and prudent behavior in the highest of human standards.

Sadly, each of you laments on how bad things have gotten but each of you, individually, seems powerless to do anything about it.  That is because an honorable leader (like the infamous John Galt) with an over whelming aura and powerful resources has not arisen out of the ashes to lead the masses against the evil forces that would enslave them.  That is because a flawed ideology has been planted in the minds of millions of Americans, Americans that have forgotten their roots of freedom and those that paid the ultimate price to secure that freedom.  The only way to fix it is to change the prevailing mindset and that is no small order.  We have tried to get people interested in a PLAN that would change that mindset but with minimal effect.  Evidently the pledges to preserve, protect and defend freedom are just hollow rhetoric.

We can only conclude from the almost total silence that the problems aren’t bad enough to trigger action by those that purport to cherish freedom at any price.  But when things do get bad enough, will it be too late where war becomes the only solution and peaceful remedies are impotent to make a difference?  We guarantee you that you will not like a “state of civil war in America.”

Ask your self.  Why is it that the screaming idiots on the other side get all the attention from the media and are able to change minds, like RINO Senator Jeff Flake, while we sit on our hands and moan and groan about what has happened to normal, reasonable, prudent people in America?

It is well known that he that makes the biggest noise gets all of the attention, whether the attention is for a worthwhile goal or an evil purpose.  When are conservatives going to start making meaningful noise?  There are many ways to make noise that don’t include marching in the streets or the halls of Congress.  It only took 3% of the population to give birth to freedom in 1776.  Our PLAN only takes 0.3% of the population to be effective to restore freedom.

If our first plan doesn’t work, we have another plan that is much more aggressive than the first and it would only take 0.16% of the population.  We call that plan “The Encirclement.”

Yes, a normal, reasonable and prudent man with a plan can make a difference, if he can convince many others of the viability of the plan.  But if no one is listening, or cares, convincing becomes impossible.  Sure, the people might be listening but apparently their feigned outrage is just empty rhetoric.