Who Controls China, Controls the World

We have read many articles seen many videos recently saying that America could be at war with China soon. If that is so, it would be straight out of George Orwell’s 1984, where we are fighting with other areas of the world just to keep our citizens afraid and in line. And yesterday, it was sent home to me.

My phone rang and told me I had a call from Mainland China. Did I answer? NO! Why would anyone in China be calling me? For a second, I thought it might be the people in Wuhan calling about an article I wrote a couple of years ago that they wanted to be pulled. But no, I had their number. 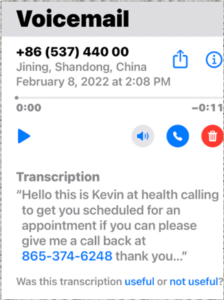 Then the voicemail came:

It was not about the largest facility ever built — right before Covid was released — to dispose of dangerous medical waste. It was about a medical appointment with my doctor here in Tennessee.

Our pundits tell us we may be at war with China, or maybe Russia, or, instead, Iran – or perhaps all three, soon. Yet our medical facilities are outsourcing to China? I’m sorry, I do not understand. How do I wrap my brain around this?

In my humble opinion, it is the update of 1984. At the Yalta Conference in 1945, it took just 11 minutes for Roosevelt, Gromyko, and a U.S. government “nobody” (Churchill wasn’t at the table for this) to hand China to the Russians. From “We Have Met the Enemy, Our own government”:

What does this whole sordid transaction teach us about the good faith of the advisers of Roosevelt and the assorted liberals, Communists, Communist sympathizers? And agents of the Kremlin – the Achesons, the Lattimores, the Phillip Jessups, and the Institute of Pacific Relations – who have for so long been insincerely befuddling the people with talk of imperialism and people’s rights in Asia. 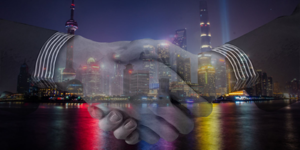 Why, merely this: that in their minds the imperialism of the west, that decaying instrument of European expansion, is wicked and must be opposed. The imperialism of Russia is not only commendable but must be advanced by every means of diplomacy and war at whatever cost to the United States. That is the liber-leftist doctrine on imperialism. Have we heard one liberal voice raised in the Senate or elsewhere in condemnation Roosevelt’s surrender to Russian imperialism at Yalta? This is the test, and by it we may measure the monstrous hypocrisy of the liberal elements in Congress and in the country which have assisted in and applauded the surrender of all China to Russia without the firing of a single Russian shot.

There was a lot of talk of the U.S. trying to entice Russia into the Japanese war, which was pure disinformation. Russia wanted to attack Japan and, far more important wanted a seat at the peace table where the spoils of the war would be divided, and they would get more than their fair share (their share would have been zero).

Back in 1942, in a meeting with Averell Harriman in Moscow, “Stalin told Harriman then that Japan was the historic enemy of Russia and that her eventual defeat was essential to Russian interests. (emphasis, mine.) Roosevelt was (falsely) advised by the Joint Chiefs of Staff that “we had a long, hard row to hoe with the Japanese and that without Russia’s help we might not achieve victory”. The Japanese were already sending out peace feelers, but this was kept from Roosevelt.

McCarthy sums it up: Was this a sincere endeavor by the master of global strategy to advance American interest? Did we sorely need Russian assistance? Or was it another in the baffling pattern of General Marshall’s interventions in the course of the great war which conduces to the well-being of the Kremlin.

Re China, McCarthy again lays it out so that we aren’t able to pretend not to understand: Was it to the Kremlin’s interest to march its armies into Manchuria, from which they had been barred since 1905 by the Kwantung army, and to be in possession there when the war ended? If some Americans did not grasp the strategic importance of Manchuria, there is certainly abundant evidence that the Kremlin, faithful to Lenin’s dictum that “he who controls China controls the world,” never lost sight of it. . . . Any intelligent American, after giving the matter sufficient thought, would know that the aim of Roosevelt and Marshall at Yalta should have been not how to get the Russians in, but how to keep them out.

John Stewart Service was one of the men whose job was to assure the Departments of War and State that “the Chinese Communists were moderate reformers, simple agrarians in the style of Thomas Jefferson, (emphasis, mine) with no subservience to Moscow. Service sent a report to the State Department in 1944, stating:

Politically, any orientation which the Chinese Communists may once have had toward the Soviet Union seems to be a thing of the past. The Communists have worked to make their thinking and program realistically Chinese, and they are carrying out democratic policies which they expect the United States to approve and sympathetically support.

Am I being silly to be concerned about any of my medical information being in Mainland China? It probably has been for years, and perhaps it is just having it confirmed that bothers me. But I am not the only one here with significant concerns. Tom DeWeese posted this today:

“It might just be wishful thinking on my part, but I’m hoping the positive result of the China Olympics will be a great awakening to the true nature of communism. They will lie, cheat, steal and do anything necessary to win. They are censoring the news media and intimidating reporters, disqualifying teams for questionable infractions, including team uniform fittings – especially those of the strongest teams. They are basically starving the athletes with uneatable rations, which can only lead to weakening them in competition. Meanwhile, the Chinese seem to keep winning. China should never have been awarded the honor to host the Olympics. Communism is the face of the greatest threat to human freedom and should never be honored in civilized society as simply another political philosophy. It destroys everything that represents human decency. Take a good look at these Olympic games and see communism in action — and stop it wherever it breeds.”

Where is the outrage? When do the governments of those competitors start demanding review and response? It looks like “we the people” are the only ones concerned that our world is being run by those who believe that “your truth is yours and mine is mine”. In fact, our government and those of most of the Western World are all caving or perhaps, better said, in collusion with the Chinese. My bet is the latter.