Skip to content
Home/Opinions, September 2017/Why Americans Should Love Their Odds

Why Americans Should Love Their Odds

They say a picture is worth a thousand words, but in this case, the picture is worth a whole lot more. 2016 marked a major turning point for the United States – away from global Marxism back towards American exceptionalism, freedom, liberty and justice for all.

But it wasn’t the end to an all-American movement, it was just the beginning. 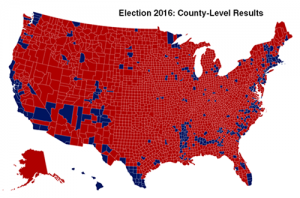 The Picture of Hope

Everywhere you see RED the people voted for President Donald J. Trump to turn this country around. Every RED county voted to end the Obama era lawlessness and march to global Marxism. They all voted against D.C. establishment career politicians in favor of a D.C. outsider who promised to represent the will of the legal American citizen.

This means that as we head into the 2018 mid-term elections, with 435 House and 34 Senate members up for reelection, the same RED counties have the power to Repeal and Replace Congress… if they work together in strategic fashion, with a take-no-prisoners attitude the same way they seized the White House in 2016.

Americans have finally come to the realization that the battle is not right vs. left or republican vs. democrat. It’s 99% of Americans vs. the 1% career political elite who serve no interests but their own. 99% of Americans want America to be great again, no matter past party affiliations. All of them have been ignored and abused by their elected representatives.

“The United States shall guarantee to every state in this union a republican form of government, and shall protect each of them against invasion; and on application of the legislature, or of the executive (when the legislature cannot be convened) against domestic violence.”

The answer is not ONE member of the House or Senate has kept their oath to uphold, defend and enforce the U.S. Constitution against all enemies, foreign and domestic, democrat or republican. NOT ONE! Yes, the 1% includes the anti-American media, which makes them appear more powerful than the people.

Only the People can “drain this swamp”

No matter how much Donald Trump might like to “drain the swamp,” alone, he can’t. No one person could. The “swamp” is vast to say the very least. 97% of federal employees, every branch and every agency combined, supported Hillary Clinton or Bernie Sanders in 2016. This means we have approximately 3% who are not part of the anti-American swamp…

If you don’t love these odds, it’s because you are not yet engaged with all fellow Americans determined to Make America Great Again! WE are the only solution WE have…

REPEAL and REPLACE CONGRESS state-by-state, district-by-district. If we don’t, there will be no one to blame but ourselves!