Why No Autopsy for Supreme Court Justice Scalia?

“[What the media reported: “On February 13, 2016, 79-year-old Justice Scalia was found dead at a luxury resort in West Texas. He reportedly died of natural causes, with later reports revealing that he had suffered from heart trouble and high blood pressure.”]

Yogi Berra once said, “It’s déjà vu all over again.” His peculiar linguistic pronouncements certainly fit regarding the circumstances surrounding the demise of Supreme Court Justice Antonin Scalia. The facts so far are even muddier than they were when President John F. Kennedy was assassinated. But here we are again and there is enough mystery here to get Sherlock Holmes salivating.

Even now, the sense of conspiracy about that day in Dallas is highly palpable. But back then, all we knew was the President had been assassinated after being shot in the head. Investigators began to see problems with the official version almost instantly even though it would be years before the public was shown the Zapruder film. That is when the polls showed that 75% of the population came down on the 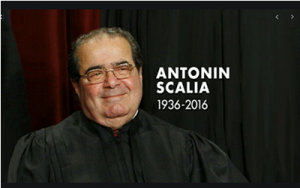 side of conspiracy. In the case of Justice Scalia however, things do not add up. It was difficult then to know which website or blog to believe, except to stick with the most credible ones. Many sites reported that a judge, Presidio County Judge Cinderella Guevara, declared Scalia dead from a heart attack, but did so without even heading to the ranch where he passed away and to investigate.

She did clarify that aspect of the rumor flying thickly around us. Despite a web loaded with stories that Scalia succumbed to a “myocardial infarction,” Guevara told reporters that she did not declare the cause of death as being a heart attack.

The Huffington Post held its punches and declared the cause of the justice’s demise to be “undetermined.” Guevara acknowledged talking to Scalia’s doctor and being told by him that Scalia had had an MRI done on his shoulder and that he suffered from some “chronic problems,” all of which were glossed over and none mentioned as being capable of causing a heart attack.

According to The Blaze, “Guevara acknowledged to the Washington Post  that she pronounced Scalia dead over the phone on Saturday without seeing his body. She told WFAA she had planned to head to the ranch but that a U.S. Marshal told her over the phone, ‘It’s not necessary for you to come, Judge. If you’re asking for an autopsy, that’s what we need to clarify.”

The Post   reported that another Justice of the Peace was called but could not get to Scalia’s body in time – and that she would have made a different determination. “If it had been me … I would want to know,” Juanita Bishop, a Justice of the Peace in Presidio, Texas, told the paper in a Sunday interview.

A scion of the Supreme Court, a man very much larger than life, amusing, very close friends with the most liberal member of the court, a man who cherished the Constitution and loved to teach, a fair-minded Supreme Court icon is found dead in bed and there is no need for the judge to come out?

A U.S. Marshal (not a local sheriff, but a U.S. Marshal) tells her to stay put? How, pray tell did a U.S. Marshal suddenly act like a medical expert show up and tell the Judge what to do? That’s convenient, and Yogi Berra pops into mind again. Had JFK’s body been autopsied in Texas, as it should have been, we would have a lot more answers about what happened to the President. Instead, two doctors who had never done a forensic autopsy before were tapped to autopsy JFK.

We decided to look up Texas law for such circumstances. Where murder may have occurred [and the lack of any indication of foul play does not rule out murder], it is governed by the “law of the situs,” meaning that local Texas law applied in this case. It was not a federal matter.

UBCHAPTER A. DUTIES PERFORMED BY JUSTICES OF THE PEACE Art. 49.04. DEATHS REQUIRING AN INQUEST.  (a) A justice of the peace shall conduct an inquest into the death of a person who dies in the county served by the justice if:

[Subsection one and two have been deleted because they do not apply in this case.]

(3) the body or a body part of a person is found, the cause or circumstances of death are unknown, and:

(A) the person is identified; or

(B) the person is unidentified;

The law clearly applies in this case. So, when is this inquest to take place? Too late, the Justice’s body, embalmed, is already on its way home to Virginia, and nobody has any idea what caused his death. “Natural causes” translated into plain English is: “Damned if I know,” and that is unacceptable in every respect in this case. He is declared dead of natural causes by a judge who has not even seen the body. Does that strike anyone else as extremely odd? It should be pointed out that under the law she can do so, but when a member of the SCOTUS is involved, you’d think she’d want to see the scene for herself. Relying on instructions from a Federal Marshall makes her an unwitting and complicit if Justice Scalia was poisoned during dinner the night before.

We might understand not going if the poor soul was a homeless person who was clearly in really bad health anyway. But someone so important to the SCOTUS and the country is just shipped out to a funeral home, apparently embalmed quickly (thus no blood samples to find anything that might trigger a heart attack or any other poison). This utterly shatters credulity and forces the American people to ask the question yet again, is Texas suddenly the land of conspiracies? First JFK, now this. Events are moving along far too quickly, and the most important evidence has been compromised.

But that is only the prelude. It was decided would be performed. Isn’t that convenient? If, and we are not saying it is the case, but if the Justice was murdered and just before the Supreme Court was to start its next term, it is simply too opportune not to consider conspiracy.

In any case, the investigators start by looking at who benefits from Scalia’s demise. The pipeline from lower courts that flows to the SCOTUS is chock full of very meaningful rulings, such as Obama’s executive action on immigration, whether the Little Sisters of the Poor must condone abortifacients, labor issues and on and on.

If he wanted to, President Obama could simply put a rabidly liberal individual on the court right now. How? Recess appointment. The Senate was not in session at the time, and under the Constitution, the president can put anyone he wants there unless… Mitch McConnell calls the Senate back into session and declares it is in “pro forma” session. In essence. it means that while the Senators do nothing (nothing new), they are still in session, and once it has been declared in session, they can all head back home, leaving a couple of senators not facing re-election to sit in the chamber.

To his credit, Obama said he would name his nominees in good time, which translates to, “I’ll wait until the Senate is in session.” But if he changes his mind and does choose the recess appointment maneuver, Mitch McConnell should have been impeached for incredible negligence.