Home/March 2021, Opinions/Why On Earth Do Americans Put Up With It?

Why On Earth Do Americans Put Up With It?

“Margaret Atwood’s novel, ‘The Handmaid’s Tale,’ described the horror of the authoritarian regime of Gilead.  In this theocracy, self-preservation was the best people could hope for, being powerless to kick against the system.  But her sequel, ‘The Testaments,’ raises the possibility that individuals, with suitable luck, bravery and cleverness, can fight back.”

“But can they?  There are countless examples of past and present monstrous regimes in the real world.  And they all raise the question of why people didn’t just rise up against their rulers.  Some of us are quick to judge those who conform to such regimes as evil psychopaths – or at least morally inferior to ourselves.”

“What are the chances that you would be a heroic rebel in such a scenario, refusing to be complicit in maintaining or even enforcing the system?” 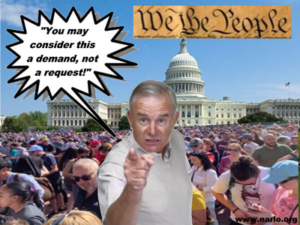 “The upper and middle classes in Germany during the 1920s-1940s were almost twice as likely to join the Nazi party than those with lower social status.  So it may be that those who have the most to lose and/or are keen to climb the social ladder are particularly likely to conform.  And, of course, if other members of your social circle are conforming, you may think it’s the appropriate thing to do.”

“Few will fight Gilead after carefully weighing up the consequences – after all, the most likely outcome is failure and obliteration.  What drives forward fights against an oppressive society is a rival vision – a vision of equality, liberty and justice, and a sense that these should be defended, whatever the consequences.”  From “Why people don’t stand up to dictatorships” by Nick Chatter

There is an old saying that stems from Murphy’s Law, “Anything That Can Go Wrong Probably Will”, or some version thereof.  That old adage seems to have magnified itself in recent months.

Out-of-his-head Joe then goes on an Executive Order rampage undoing most of the good things that were accomplished by the last administration.  The doors to our southern border were opened wide so that anyone who wanted to come to America could (all 7 billion of them) illegally we might add, and the American taxpayer would pick up the massive tab for the illegal alien’s housing, food, clothing, education, health care and welfare.  As a consequence the Coronavirus was imported to America again from Mexico and Central America and spread throughout the nation ….. during a killer pandemic where 540,000 people have died so far.  This doesn’t even include the crime that is being imported to America by illegal aliens and the toll it is taking on thousands of legal American victims.

To add insult to injury the president and his socialist Democrat perpetrators are attempting to grant amnesty by legislation to millions of those aliens that have defied our laws and jumped our borders to live freely under the protections of our laws and government benefits, while taking jobs away from legal Americans.  But then you know all this don’t you?

That unlawful immigration injustice was then followed by a $1.9 Trillion rescue package passed by Congress, that was more about paying off Democrat states, cities, friends and donors than it was about rescuing those hit hard by the home lock downs and business shut downs.  But then you know about this as well.

But there is more, much more.  Besides re-instating Critical Race Theory being shoved down the throats of government employees and turning the military into an LGBTQ training camp, dementia Joe got the U. S. House to pass the “Gender Equality Act” which has the effect of turning womanhood into second and third class citizens.  The Act is now in the Senate’s hands and who knows what happens there.

And let’s not forget Speaker Pelosi’s HR 1 bill that strips the voting process away from the states and gives it to the federal government.  What could go wrong?  Just about everything!

The worst of Joe’s Executive Orders is to implement actions to reduce the alleged, unproven man-made climate change and to in-act sections of the Green New Deal.  The net effect being a massive rise in prices associated with fossil fuels, millions of acres used up for unsightly, inefficient, highly subsidized wind and solar power, huge rare earth elements extracted from foreign countries like China, for turbines, solar panels and back-up batteries, where there are no environmental, work standards, or child labor laws.

We could go on and on about the damage that President Biden and the socialist Democrats have inflicted in just a few short months and will inflict upon America and the American people in the next two years.   However, if you have been watching the news, none of this is “news” to you.

There is only one question.  What are you going to do about it?  There are only three alternatives: 1) do nothing, which most of you will do; 2) moan and groan about how bad it is; or 3) actually lift a finger and get in the game of rolling back what Biden and the Democrats are doing.  There is a 4th alternative, revolution or civil war, but none of you will do that.  In reality, everything that you see transpiring in front of your eyes should trigger a revolution or civil war.  Your average colonial in 1776 went to war for far less than we are enduring at this point in America’s history.

What most people don’t seem to understand is “their power is greater than those that rule them.”  Individually, you have no power at all.  Together, in large numbers, you have unbeatable power.  That power, applied in the right direction and in the right places, can affect the outcome of government decisions and policies.  Your effectiveness is measured by the strength and volume of your message and your determination to see it through.

But if you lay low and out of sight in the hopes of not getting noticed by the arrogant oligarchs who control your lives, you will eventually be taken by surprise when that SWAT team appears on your door step charging you with a violation of some law, rule, or regulation about which you have no knowledge.  Unbeknownst to you, it is already happening all across America right now.  Homes are being broken into, farms and businesses are being raided and government agents and law enforcement are arresting people for minor infractions, or no infractions at all.  Most of these people were unaware that they had broken any laws.  Some were violating the law on purpose to resist government encroachment in their lives, like small businesses are doing in response to the covid shut downs.  (See: “Too Many Laws”)

For those of you NOT hiding in your closet, we have developed a way you can fight back with very little effort on your part and in such a manner that government can’t identify you.  If done on a large enough scale, from tens of thousands or even millions of patriots all over America, its ability to change government decisions and policy is unquestionable.  We call it “The Mandate” from “We The People.”

We say, “Why On Earth Do Americans Put Up With It?”  Perhaps they wouldn’t put up with it, if they had the right tools, a simple method to make a difference, a way to stay anonymous and little effort to get the job done.

If you really care about your country, take the time to read over “The Mandate” and follow the directions on how to proceed.  It is just a matter of printing it out, checking off the boxes you think should be included, add your state and personal code that only you know, then send it to the President and your senators and representatives, state and federal.  Your cost is a few minutes of your time, some envelopes and some stamps.  You CAN make a difference, but only if you get in the game.