Why The Globalist Establishment Hates Our Historic President

A great man shows his greatness by the way he treats little men. —Thomas Carlyle

Most of the important things in the world have been accomplished by people who have kept on trying when there seemed to be no hope at all. —Dale Carnegie

I have no patience for injustice, no tolerance for government incompetence, no sympathy for leaders who fail their citizens. —President Donald Trump

The refusal to take sides on great moral issues is itself a decision. It is a silent acquiescence to evil. The tragedy of our time is that those who still believe in truth lack fire and conviction, while those who believe in lies are full of passionate resolve. —Bishop Fulton Sheen

Before I delve into this article, remember that it was Donald Trump who waited behind the curtains in one of the debates when Dr. Ben Carson didn’t hear his name called. Carson told about all those who passed him by and smirked, (Bush, Cruz, Rubio) but not Donald Trump. Trump stopped and knew what had happened and waited there with Dr. Carson until Carson’s name was called again. He walked partially out with the doctor as though they’d been talking, and then stepped back. Trump covered for him, and that my friends is the heart of our President. He is the “great man,” in the Thomas Carlyle quote above, and I heard Dr. Carson tell this story in person.

How many other stories have we heard of the kindnesses of our President, both before his election and after, and yet the enemies of freedom despise him so much that their one desire in life is his destruction and removal from office. We have watched for over three and a half years the unconscionable and amoral attacks by the socialist democrats and the lack of support from the neo-con Trotskyite right.

Why? Because nearly all of them belong to an evil cabal that for decades has been eroding our God given freedoms and liberties. The constant denigration by the globalist left is aimed not only at the president, but those who elected him. To hell with small businesses and jobs, they don’t care. Their ultimate goal is to destroy America from within by plunging her into the trash heap of failed Marxist experiments and eliminating every God given freedom recorded in America’s Constitution.

One Party, One Agenda

Only a handful of Republican representatives and senators fully support our President and understand the peril our nation is facing. We know who they are, and along with our President, every one of them needs prayer, for they are battling the very principalities of darkness. Those who are in this war understand that the destruction of this magnificent country has been in the works for more than a century.

It was in 1966, when Carroll Quigley wrote his massive book Tragedy and Hope, A History of the World in our Time. Tragedy being that so many people have to die, and Hope being the New World Order. He was the official historian for the Council on Foreign Relations (CFR) and was privileged to study the elites’ plans for the world for nearly two years. Quigley taught at the School of Foreign Service at Georgetown University from 1941 to 1976, and was Bill Clinton’s mentor. On page 1247 to 1248 of his book, he wrote this:

The chief problem of American political life for a long time has been how to make the two Congressional parties more national and international. The argument that the two parties should represent opposed ideals and policies, one perhaps, of the right and the other of the left, is a foolish idea acceptable only to doctrinaire and academic thinkers. Instead the two parties should be almost identical, so that the American people can “throw the rascals out” at any election without leading to any profound or extensive shifts in policy. The policies that are vital and necessary for America are no longer subjects of significant disagreement, but are disputable only in details of procedure, priority, or method …..Then it should be possible to replace it, every four years if necessary, by the other party, which will be none of these things but will still pursue with new vigor, approximately the same basic policies.

This is what exists today in America! We have one party with one agenda! This book had its first printing in 1966. The powers that be (Milner, Rhodes, the CFR, etc.) were so horrified that Quigley had exposed their secrets, the book was not reprinted, and Macmillan Publishing destroyed the plates.

It wasn’t until 1974 that Jack Meserole got permission from Quigley, reprinted the book, and sold it for his cost. Quigley laughed at the elitists because he knew the noose was so tight around the necks of Americans that even with the truth of his book, nothing would change.

Long before 2015, Donald Trump knew the country was not headed in the right direction. He sacrificed an easy and comfortable life to try to save this great nation. He is not perfect, but IMHO he’s the best president we’ve had since Calvin Coolidge. Donald Trump is a businessman and for people to truly understand how he operates, one need only read, The Art of the Deal. Trump is a deal maker who has made us believe again in the American dream. I am grateful every day that Hillary Clinton is not in the White House.

On Thursday, August 6, 2020, President Donald Trump made some unusual statements during an address at the Whirlpool Corporation manufacturing plant in Clyde, Ohio. While speaking to the crowd of onlookers, Trump dramatically suggested “So I have a lot of enemies out there. This may be the last time you’ll see me for a while. A lot of very, very rich enemies, but they are not happy with what I’m doing. But I figure we have one chance to do it, and no other President is going to do what I do.” He then went on to refer to these unsaid adversaries as “very, very rich enemies” who are not happy with what he’s doing. 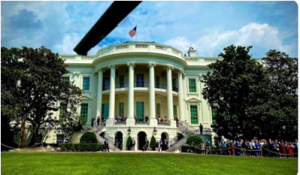 We are left to wonder just exactly what our president is referring to and why we wouldn’t see him, and why when he left for Ohio, his entire staff was outside the White House to see him off.

No one seems to have a clue of what our president meant. What we do know is that the entire Democrat Party along with a majority of the neo-cons in the Republican Party hate this historic president for disrupting their goals of changing America into a communist state.

Somehow the belittled and mocked real estate mogul from Queens has stumbled into creating a movement that matches in strength and potency what took past leaders over a century to perfect. It has conquered the world. Hong Kong patriots for freedom carry the very picture of Donald Trump on a tank…fighting for freedom. Consider the fear that has been generated by the socialist democrats who are now an exact copy of the Communist Party USA.

It’s Trump’s greatness that makes them tremble. It’s Trump’s ability to speak to the people in their terms and their words that makes them hate him even more. It’s his energy, his drive, his thousands of followers who make his enemies work to destroy him. We’ve never seen a president who sleeps so little, works so hard, gives so much, and doesn’t even take a salary. We are dealing with something rare indeed. Donald Trump is a worldwide historical figure…he is making a path for freedom … a path we’ve not traveled in many decades. With Trump, everything is different.

The democratic controlled mainstream media are blind to the truth of what this man represents. He practically told them in his inauguration speech that he would destroy what they wanted for our country. It’s why former President George W. Bush said, “Well, that was some weird s**t.” This is the reason both sides joined hands with the Deep State to destroy the people’s president…he shined the light of truth on the evil that has pervaded our beloved country.

Donald Trump has cast a light on the national consciousness. Both parties are socialist globalist cults more concerned with government power and nation building than American freedoms. American companies’ use of slavery by proxy with China and other nations needs to stop…it has caused the silent destruction of towns throughout the Midwest and beyond.

Prior to this planned scamdemic, Americans were on the road to the American dream. It wasn’t Trump who destroyed their dreams, it was the Socialist Democrats and their Marxist friends in BLM and Antifa. It was jealous China who purposely allowed the spread of a flu virus throughout the world. And it was the neo-con head of the Coronavirus Task Force who gave us Fauci, Birx, Redfield and now Bill Gates…

Trump stands alone for us…for the American people…all of us, every color of human origin, and every ethnicity, he stands for freedom and liberty for us all. If you haven’t noticed, you’re not paying attention to one of the greatest historical figures of our generation. The world has noticed!

It is Donald Trump to whom Nigerian Christians turn for survival from Islamic terror. It is Donald Trump who has strengthened Israel by keeping promises his predecessors lacked the fortitude to see through and moving our US Embassy to Jerusalem. It is Donald Trump whose name is often whispered by freedom-fighters in Venezuela, whose American flag is respected by regime protesters in Iran, and whose image is waved by thousands demanding freedom in Hong Kong. Nobody clamoring for freedom is waving pictures of communist leaders in the air, but in Hong Kong and Taiwan, a photo-shopped image of Donald Trump as Rocky Balboa is easy to find.

Those who love freedom, love President Donald J. Trump. God never has chosen perfect men. He chose Moses, David and Saul of Tarsus (Paul), all three were murderers. Trump is the imperfect man chosen by God to restore this country to her greatness and her goodness.

Many in power hate our historic President, so please pray mightily for him and for our country.