Skip to content
Home/June 2017, Opinions/Will Trump Save Himself With White House Shake Up?

Will Trump Save Himself With White House Shake Up?

The Wall Street Journal and the New York Times have both reported that President Donald J. Trump intends a major staff shake-up now that he has returned from his international tour.

Both the Wall Street Journal and the Washington Post said that experienced D.C. political hand David Urban, former Chief of Staff to Sen. Arlen Specter and now a Washington lobbyist known for his quiet and low-key efficiency will be tapped for the White House staff in some capacity in the near future.

Urban, from Aliquippa Pennsylvania, is a former altar-boy, son of a union card carrying steelworker, graduate of West Point, who served his country on both the field of battle and in the US Congress.

Urban served as the no-nonsense Administrative Assistant and Chief of Staff to the meanest, smartest, toughest man ever to serve in US Senate, Senator Arlen Specter. Urban’s ability to manage the affairs of the one of the most driven, resourceful and relentless men in American political history makes him a tailor-made fit to serve the hard driving Trump.

Lobbyists and government officials alike agreed that he ran one of the most effective and efficient US Senate offices in the nation’s capital. Urban has the US Army discipline and snap that would make Bob Haldeman proud, combined with a shrewd ethical sensibility. He is fiercely loyal to Trump. He also knows his way around Washington and the federal bureaucracy.

Urban ran the campaign in the Keystone state, delivering heavily Democratic Western Pennsylvania to Trump, helping propel the Manhattan billionaire to 1600 Pennsylvania Ave. I detailed Urban’s key role in my book, The Making of the President 2016: How Donald Trump Orchestrated A Revolution.

Urban promoted the Trump message successfully to blue-collar Catholics, Jews, and union members. This helped the Trump campaign run up the numbers in Western Pennsylvania, doing better in Democratic strongholds than past GOP nominees. These are the new “Trump Democrats.”

President Trump would be wise to utilize Urban’s talent, a point that the New York Times even made, claiming that Urban was “going in.” With Urban, he can expect loyalty and competence, the two things he desperately needs as the Obama hold-overs who continue to populate the government, work to leak to undermine his Presidency.

In many of the same newspaper stories is the ‘fact” that fired Trump campaign manager Corey Lewandowski will be returning to the first circle of Trump’s advisors. Lewandowski would supposedly spearhead an effort to “find the leakers” and to enforce ‘discipline” and “security” in the Trump White House. This is the worst idea of all time.

This “covert-op” to stop the leaks on Trump’s staff is allegedly a joint effort with David Bossie. Mr. Bossie is the man behind the stunning “Citizens “United” supreme court decision.

**FULL DISCLOSURE: Bossie’s wife Susan served for several years as my assistant. She is one of the most decent, capable, organized and intelligent women I have ever known. ** 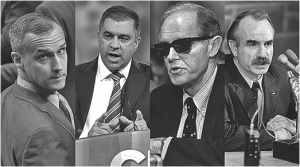 If the President is concerned about leaks, he should ask the FBI to investigate under their cloak of legal authority. Appointing Lewandowski and David Bossie to such a role would be reminiscent of the Watergate “plumbers.” Like E. Howard Hunt and G. Gordon Liddy, these unsophisticates will get the President into trouble.

Also in the works is allegedly a “war room” run by Steve Bannon to push back against the President’s critics, although it’s not clear Bannon could run a bath. Instead of a PR offensive, the White House needs to score on policy and focus on the agenda that got Trump elected. At the same time, they need to turn the tables on those inside government who seek to undermine him. Trump should direct Attorney General Sessions to appoint Bob Barr as the special counsel. Barr, a former US Attorney, should investigate the unconstitutional breaches at the NSA under Obama as well as the illegal use of intelligence information for political purposes by Susan Rice and others.